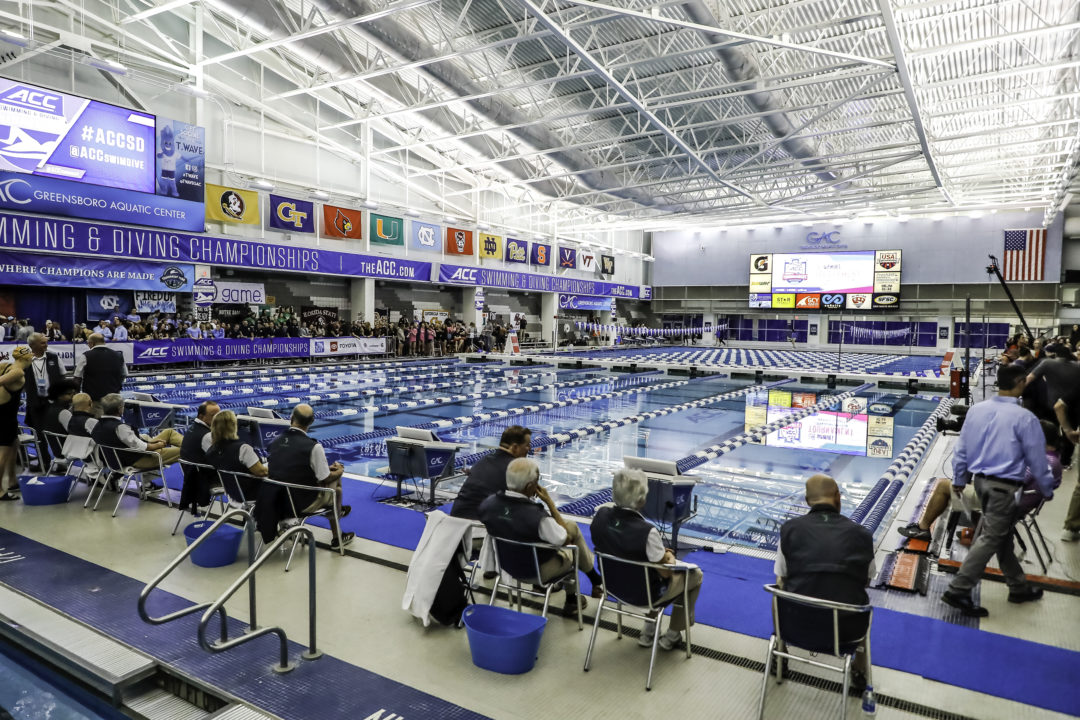 There was only one tie requiring a swim-off in this morning’s ACC prelims, and that came in the 100 fly, where Louisville’s Mitchell Whyte and Virginia’s Max Edwards tied for 16th with times of 46.62. That was just a bit of each swimmer’s lifetime bests (46.32/46.45, respectively) in each case done at last year’s ACC Championships.

That was also the first leg of the 100 fly/back double for each swimmer, with the swim-off being the third swim of the morning for each.

Roughly 40 minutes after the conclusion of the main morning session, the pair squared off side-by-side. It was a relatively closely race, but Whyte prevailed, hitting a new lifetime best of 45.97 that would’ve qualified him for the A-final had he matched that time in the first swim of the morning. Edwards also hit a new lifetime best, touching in 46.36, which would’ve qualified him 11th overall this morning.

Assuming the Louisville coaches don’t opt to make a switch after Whyte’s extra swim this morning (and that doesn’t seem likely), Whyte will also lead off the Cardinals’ 400 medley relay at the end of tonight’s session. The Cardinals won the 200 medley Wednesday night, and are in probably in line to win tonight, although Georgia Tech, NC State, and Virginia Tech could all make some noise as well.

Edwards may end up on the medley relay as well on Virginia’s fly leg. He swam fly on the 200 medley relay Wednesday, as he did last year, but last year Virginia opted to use Konnar Klinksiek on the longer medley relay. That decision is a bit murkier this year given that Edwards was faster than Klinksiek in the 100 fly prelims, but also will end up with three more swims today than his teammate.

I have swam against Mitchell, my god has he become fast!

I know right! I believe swim swam did a story on his development. He has gotten so fast!