Who’s In Line For the Most Coveted Job in Swimming, Texas Men’s Head Coach? 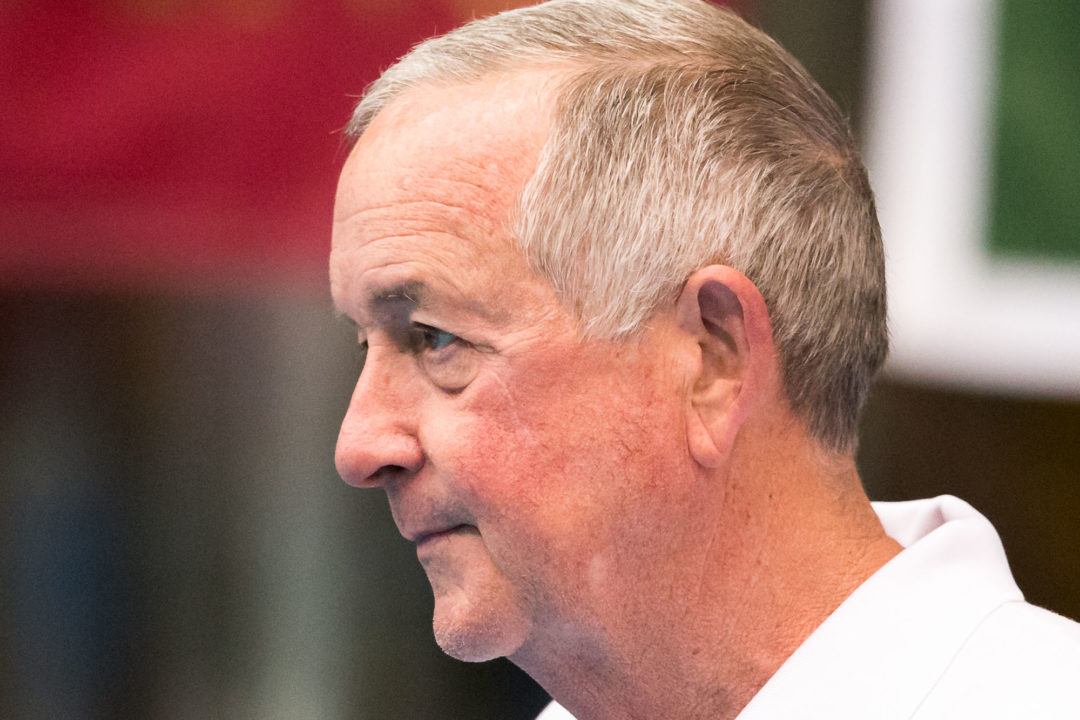 Braden Keith and James Sutherland contributed to this report.

We knew at some point, one way or another, Texas head coach Eddie Reese would call it quits on an illustrious career, and the legend announced today that he will be retiring after this summer. What we don’t know, however, is exactly who is line to replace Reese.

On one hand, this may be the most desirable job in swimming. On the other hand, it’s tough to fill the shoes of someone as legendary as Reese, and those will be some very big shoes indeed. Still, it’s hard to imagine any coach not being a candidate here, although it feels like a lot of the names of top programs like Tennessee head coach Matt Kredich, Cal head coach Dave Durden, and Louisville head coach Arthur Albiero, etc., have good reasons to stay at their current programs.

We also do know that assistant coach Wyatt Collins is the interim head coach, and over the last few years, most of the expectation from those on the inner circle of the Texas family has been that either Collins or the decorated former Longhorn and Olympian Brendan Hansen would be next in line to succeed Eddie.

From the outside looking in, it appears as if Reese has been grooming Collins for this job ever since longtime assistant Kris Kubik retired five years ago. The initial knock against Collins was his age and relative inexperience. But he’s been out of college for 8 years, and that puts him around 30 or 31, not much younger than Cal head coach Dave Durden or NC State head coach Braden Holloway were when they stepped into their current roles. As far as experience, five years as Eddie Reese‘s right-hand man (and several years as a volunteer assistant before that), are probably as good preparation as just about anything else.

He has some international coaching experience now too, having served as an assistant coach for Team USA at the 2019 World University Games. Collins is the interim head coach already, and while Texas may officially conduct the normal “nation-wide search” our guess is that if Eddie recommends Collins for the job, and Collins wants it, it’s his.

Brendan Hansen also makes a lot of sense. He swam for the Longhorns from 2001-2005, going 8-8 in NCAA breaststroke titles. Even for an Olympian, he’s well-connected with USA Swimming, currently serving as Director of Team Services. From 2014-2018, Hansen was the head coach of the Austin Swim Club, where put several athletes onto the USA Junior National Team. Hansen doesn’t appear to have any paid experience coaching at the college level, and it’s almost unheard of for someone to make the jump from coaching club to a top 10 Division I program, but he may be a big enough name to make that leap.

Still, we’re assuming that, even if Texas is strongly considering one of those two men for the job, they also will be taking a serious look at other candidates. SwimSwam has reached out to many of the top college coaches in the country, and so far none have responded saying that they’re not interested in the job.

With that out of the way, here’s just a few of the many possible candidates who might be interested — and could conceivably be good fits for — the biggest coaching opening of the generation.

Henry graduated from Texas in 1990 after having been part of three NCAA champion teams. He’s coached at the high school and college level, including ten years as an assistant at SMU and a stint as the associate head coach of the Texas women’s team. He’s been at Yale since 2012, first serving as the women’s head coach, and then also took over the men’s team in 2017, immediately after the women’s team captured an Ivy League championship. The men’s team hasn’t quite gotten to that point yet, but he really only had them for two or three seasons before the pandemic impacted things, so it’s tough to extrapolate too much from that.

Texas has no shortage of alum who have Olympic medals to choose from, and Ian Crocker is still one of the most recognizable names in swimming. He’s currently coaching at the Western Hills Athletic Club in Austin, but he also does have some college coaching experience, having served as a volunteer for the Texas women from 2012-2015.

Like Hansen and Crocker, Walker also brings a ton of name recognition with also a lot of club coaching experience. He’s a bit older than Crocker and Hansen, having graduated in 1999, and has been coaching at the club level since 2005, spending four years as an assistant at Longhorn Aquatics. Currently, he’s head coach of the Rockwall Aquatics Center of Excellence (RACE), where he’s been since 2009.

As we said with Hansen, it’s hard to imagine club coaches getting a job like Texas’ without significant college coaching experience, but you have to wonder if having name recognition like Hansen, Crocker, and Walker do might at least generate some interest, if any of them are in fact considering applying for the job.

Here’s another couple possible names who probably wouldn’t get hired head of anyone else on this list, but have Texas connections, some coaching experience, and could be possible assistant coach candidates:

On one hand, it’s hard to imagine someone like Meehan making the jump from one marquee program (Stanford women) to another (Texas Men). But we’ve previously mentioned in these speculation articles about the high cost of living in the Bay Area relative to the rest of the country, which has to be considered a factor here. Additionally, while Texas’ admissions standards certainly aren’t lax, they’re not quite as stringent as Stanford’s are, something that could make recruiting easier, although it’s not like that’s hurt the Stanford women under Meehan, as they won three-straight NCAA titles from 2017-2019.

Named head coach of the Wolfpack in June 2011, Holloway has led the NC State in becoming one of the best swimming programs in the country. Holloway has transformed both the men’s and women’s teams into powerhouses, winning multiple conference titles and recently pushing the women’s team to a historic runner-up finish at NCAAs.

As an NC State alum, and given how far he’s taken the program, Holloway is another coach who would seemingly be happy to stay put. But, it’s Texas. And he’s proven to be one of the country’s top coaches, so you never know.

A huge part of NC State’s meteoric rise over the last decade, DeSorbo moved to the University of Virginia beginning in the 2017-18 season and has led the program to new heights since. The UVA women won the first NCAA title in ACC history this past season and claimed a third conference title under DeSorbo in February. The men’s team also recorded their best finish since 2013 when they took second at ACCs last season, as well as a 9th-place finish at NCAAs, the team’s best in over a decade.

Given that the Cavalier women look like they have the potential to dominate in future seasons like the Texas men have in the past, DeSorbo may be happy to stay put, but given his pedigree, especially with sprinters, he’ll certainly be someone Texas will have to consider, if he’s interested.

Lopez has a wealth of experience coaching top collegiate programs in the past, taking over the job at Virginia Tech in May of 2018 after spending the previous two years as an associate head coach at Auburn. The Hokies have been developing quickly under Lopez, as the men rose to 3rd at ACCs and 11th at NCAAs this year. Lopez was also integral in developing one of Texas’ recent biggest stars, Joseph Schooling, when he led the Bolles School in Jacksonville, Florida, from 2007-14.

Also having served time as the head coach of West Virginia and at the Singapore Swimming Association, Lopez’s experience fits the bill of what Texas will be looking for.

Calanog joined the Aggies in June 2015 as an assistant and has since been promoted to associate head coach. He helped lead the men’s program to match their all-time best finish at the 2020 SECs, placing second, and was an important component in Shaine Casas’ historic 2020-21 season that included three national titles.

Calanog also helped develop Caeleb Dressel, arguably the world’s best swimmer, when he was with the Bolles School Sharks from 2007-15, prior to his arrival in College Station.

Austin is only about 2 hours from College Station, where Calanog is raising a young family that has some roots in Fort Worth, though it would be more of an under-the-radar hire for someone who appears ready to take over a full-time head coaching gig.

Like Lopez a few years back, he’s a name that will keep popping up on these sorts of lists until he lands a head coaching job. Maybe he’s considered the head coach-in-waiting at Michigan, but even if so, he seems like the type of associate head coach who might be interested (and considered) for this position. He focuses coaches open water and distance swimmers, and Texas currently has a very strong distance group, has had experience coaching on Team USA’s international teams, and he’s been an NCAA head coach (at Division III power Pomona-Pitzer).

It’s rarely to easy to follow up a legend like Reese, but Jungbluth has already been in a similar situation, as he and Florida head coach Anthony Nesty took over the Florida men’s team after Gregg Troy retired in 2018 and the program was split. The Gator men didn’t really seem to miss a beat, as they’ve continued their SEC Championship streak, and also look very sharp in taking 3rd at NCAAs last week.

Additionally, Reese is known for creating a great team atmosphere, and the Florida swimmers we’ve spoken with lately have been effusive with praise for the current Florida coaches in helping that team develop not just athletically, but emotionally as well, something that seems right in line with Reese’s legacy. Lastly, Jungbluth’s long coaching resume includes time as head coach at Austin College, which is in Texas, although ironically, not in Austin.

I heard Mark Hill got it but he already resigned

People must have stopped laughing at his jokes. 😂Good luck Eddie!

Brian Schroeder? Him and Eddie are boys

What about Matt Bowe? Lars should be on the short list. I could also see Marsh going for this. Coley and maybe even Barnes should be mentioned.

Lars has had a lot more success with the women than the men. He’s obviously a great coach but so far he’s shown that he can build a great women’s program but hasn’t shown that for the men yet.

Did every coach of a winter sport at Texas just leave or retire? Interesting to see how many kids stay and how many transfer.

I am in line for the most coveted job in swimming, texas men’s head coach.