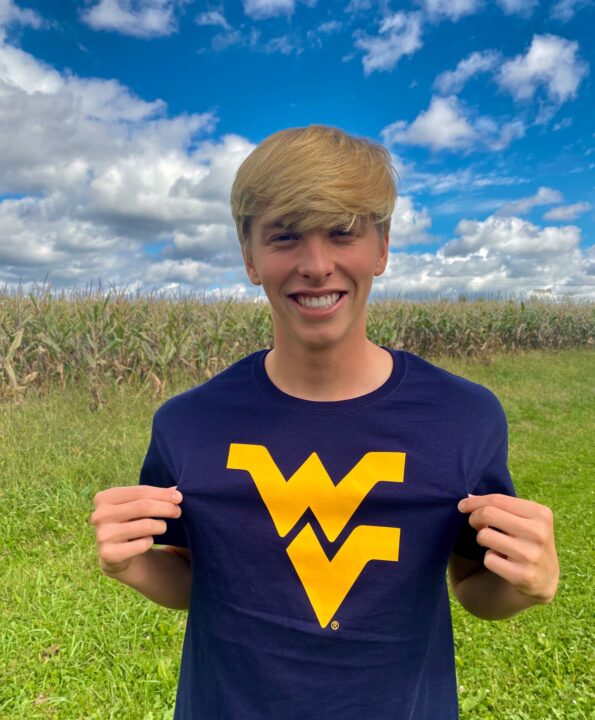 A Futures finalist and Winter Juniors qualifier, Parker Sterlitz of Leechburg, Pennsylvania has announced his college commitment to swim for West Virginia University. He will join the Mountaineers this fall after finishing high school at Kiski Area High School.

In December, Sterlitz competed in two events at the Winter Junior Championships-East meet, swimming a pair of lifetime bests in the 500 and 1650 freestyles. His top finish came in the 1650 where he dropped over 10 seconds to finish in a time of 15:57.10. That time was fast enough to earn him 44th overall. He also added a lifetime best of 4:36.65 in the 500.

Sterlitz competed in both the 200 and 500 freestyles last March at the PIAA Boys 3A Swimming and Diving State Championships. His highest finish came in the 500 free, where he took 20th in 4:43.16. With his improvement since then, he will likely compete for a top-8 finish in the event this season.

When Sterlitz arrives in Morgantown this fall he will immediately provide strong depth for the Mountaineer’s distance group. Last season, he would have been the program’s third-fastest performer in the 1650 and fifth-fastest in the 500 free. Last year, the distance group was highlighted by William Mullen, who set the school’s record in the 1650. Mullen is only a junior this season, meaning Sterlitz will have one year of overlap with him after arriving on campus this fall.

West Virginia took third out of three teams at the 2022 Big-12 Swimming and Diving Conference Championships. The Big-12 is set for major changes during Sterlitz’s college career. His freshman year will see the addition of Brigham Young and Cincinnati to the conference, while historically dominant Texas is currently set to leave before his junior year.

West Virginia is led by head coach Vic Riggs, who has been with the team for nearly two decades. Prior to his coaching career, Riggs was a distance specialist, ranking in the top-10 in the world in the 400 and 1500 freestyles and representing the United States at the 1985 World University Games.