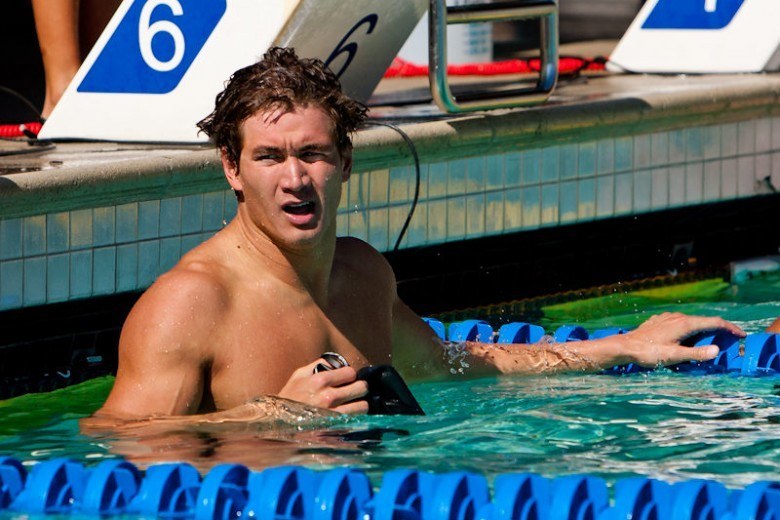 This report was contributed by Anne Lepesant. Ms. Lepesant has four daughters who are swimmers, including one who will begin at the Savannah College of Art and Design in the fall.

Dana Vollmer topped the 100 free prelim in 54.38, and then bookended that at the end of the session with a 57.07 in the 100 fly that already is a Meet Record by seven-tenths of a second. In both races, her teammates and training partner Natalie Coughlin was 2nd, with marks of 55.12 and 58.56, respectively.

In the men’s races, Nathan Adrian’s 48.50 in the 100 free was the big story, as he dominated both the front-and-back halves of the race. In fairness, this was really his final as he’s scratched the evening session to head to Seattle for his older brother’s wedding.

That leaves South Korea’s Tae Hwan Park as the top seed with a 49.81. After winning the 800 on Thursday evening, that’s a very good 100 time to come back with. Anthony Ervin (50.14) and Will Copeland (50.26) will be hot-on-his-heels in the final, with Ervin swimming a time within half-a-second of his best since coming back.

Tom Shields (50.90) and David Nolan (50.90) tied for 11th to put themselves in the B-Final. This final will be a doozy, across the three levels (A, B, and C, with 9 swimmers each). Also of note, the Redlands Swim Team’s Kyle Gornay, who recently had a great CIF Championship meet, was 28th in 51.68. That’s a best time by half-a-second for the 16-year old. Adrian’s scratch will move him into the C Final.

In the men’s 100 fly prelim, Japan’s Takuro Fujii (53.18) and Takeshi Matsuda (53.77) took the 1st and 3rd seeds in prelims, with Cal’s Tom Shields in-between in 53.49. That time is within a tenth of what American favorite Michael Phelps went in Austin earlier in the morning.

Webcast stopped when the men 4×100 free was still on the first leg!
Ridiculous!

Solid finishes by the lady Bears. I could see how some are concerned about Natalie- but reality and results are showing that Dana might be carrying the ‘torch’ so to speak. OT will solidify if that assumption is correct.

It is working now! Only missed the women’s 100. Anyone know what Dana went? Of course the live results don’t work either.

the hi-tek results are working. dana vollmer won in 54.38 and natalie got 2nd in 54.77. natalie’s times are still not coming down… a little worrisome because she usually swims pretty fast at this point in the season.

i’m having the same problem..

They live streaming on USASwiming.org isnt working for me- anyone else having the same porblem?

I can’t get it either, Ricky Berens said the same. Must be down.

Vollmer is allready being very fast ! can imagine the best for her at trials and in London . Cal is doing so good .

remember how natalie was in that video about how great the cal weight coach is and how he is the reason for her success? why is dana (natalie’s own teammate) destroying natalie? maybe dana has a different/better training method

Pretty sure that Dana and Natalie are doing very similar things outside of the pool. I know they both went down to Australia a little while ago to do someunorthodox training with Mitt Nelms. Perhaps it helps that Dana is about 8to inches taller than Natalie. It’s also just prelims and they’re swimming Dana’s better events.

This does not make any sense.
Ryan Napoleon trains with Park Tae Hwan day in day out and Napoleon is maybe half-foot taller than Tae-hwan, and yet Napoleon is 4 seconds slower.

Well according to Wikipedia Park is 6 ft and Napoleon is 6′ 2″ so not a huge difference. That said i was just pretty much responding to a spurious question with a spurious answer. We all know that different swimmers swim different speeds at the same time of the year relative to their taper even when they’re in the same training program. If anything my post was meant to illustrate the different physical limitations that Dana and Natalie each have to deal with. Natalie has never been as fast as Dana has been going the past year or so. What i take away from this is that if anything she’s closing he gap.

Natalie is also 5 years older than Dana and, at 29, probably isn’t going to be dropping close-to-best times every race.