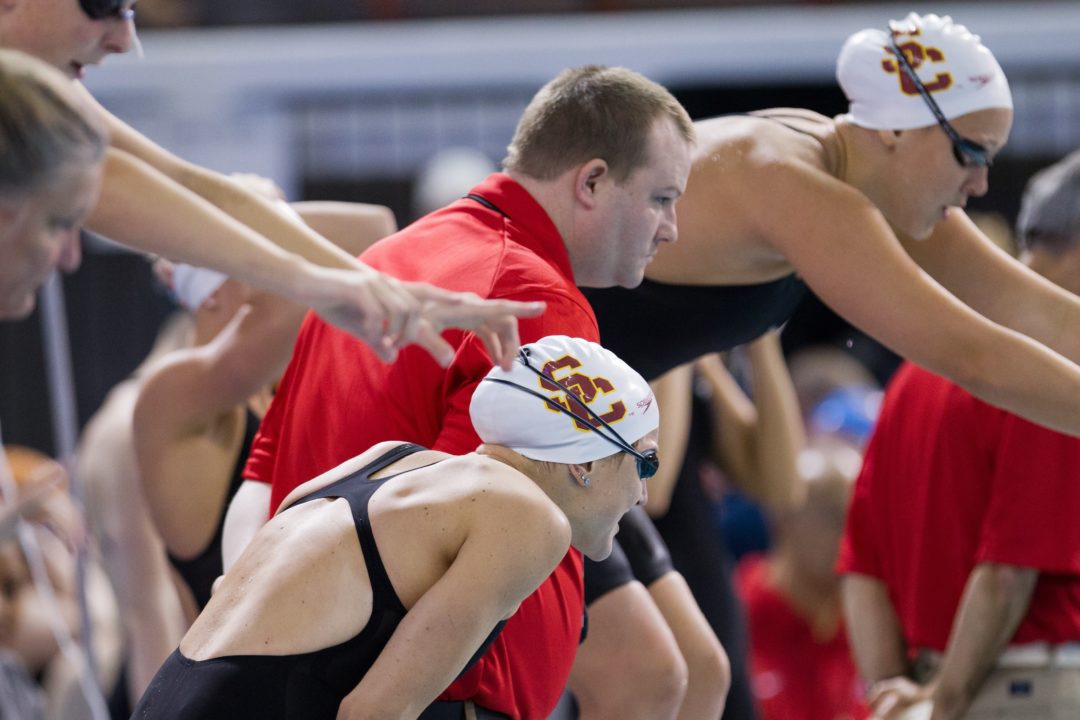 Ashley Brewer is headed to LA next year; while Melanie McClure was also granted a release. (Photo Courtesy: ©Tim Binning/TheSwimPictures.com)

It’s unavoidable when there’s a coaching change that there will be transfers. There are swimmers who were disenchanted with the previous staff, those who aren’t in love with the new staff, and those who just decide it’s time to follow their hearts.

Former Texas Longhorn Ashley Brewer falls into the latter of those categories. Originally hailing from Phoenix’s Chaparral high school, she grew very close to the Los Angeles area and the swimmers at USC with both of her older brothers playing baseball at crosstown rival UCLA. “I am moving closer to home and becoming a USC Trojan. I start practices next week and could not be more excited to swim for this team and represent Trojan at Olympic Trials,” Brewer said of her decision.

Brewer is a very good backstroker, with a best time of 54.85 in the 100 from last year’s UT Invite – she also broke the Arizona State Record in that race as a senior in high school.

While Brewer’s two brothers went to school in Los Angeles, she recently got some company in Austin. Her little brother Connor enrolled at Texas this semester as a quarterback on their football team. (Quite the athletic family – little sister Abby has committed to play volleyball at SMU as well).

As alluded to above, brewer has an Olympic Trials cut in the 100 back thanks to a 1:03.83 from December. In yards, she’s also a 1:57 200 backstroker. This will actually fill a significant need for the Trojans – it will slot her in as the team’s number-three 100 backstroker behind Yumi So and Christel Simms; and will put her in good competition with fellow junior-to-be Meghan Hawthorne as the team’s best 200 backstroker (barring any say-so from freshmen, of course).

“It is such an honor to be given the opportunity to swim for a coach like Dave Salo. Southern Cal provides an outstanding coaching staff, great athletes on the team that I am already close with, and an excellent education.”

Much like we are seeing at Arizona, whenever new coaches come in there’s some amount of turnover on a roster. All of a sudden, athletes are thrust into a situation where they didn’t get to choose their coach, and they are sometimes given a release to transfer and find the best situations for themselves without any hard feelings.

“My past two years in Texas has been a great experience and I will miss my wonderful friends and teammates. I wish the Longhorn program nothing but the best.”

With arguably one of the nation’ finest coaching staffs begin assembled, I sincerely hope there soon will be many world class swimmers and divers transferring to the University of Alabama’s swimming and diving program.