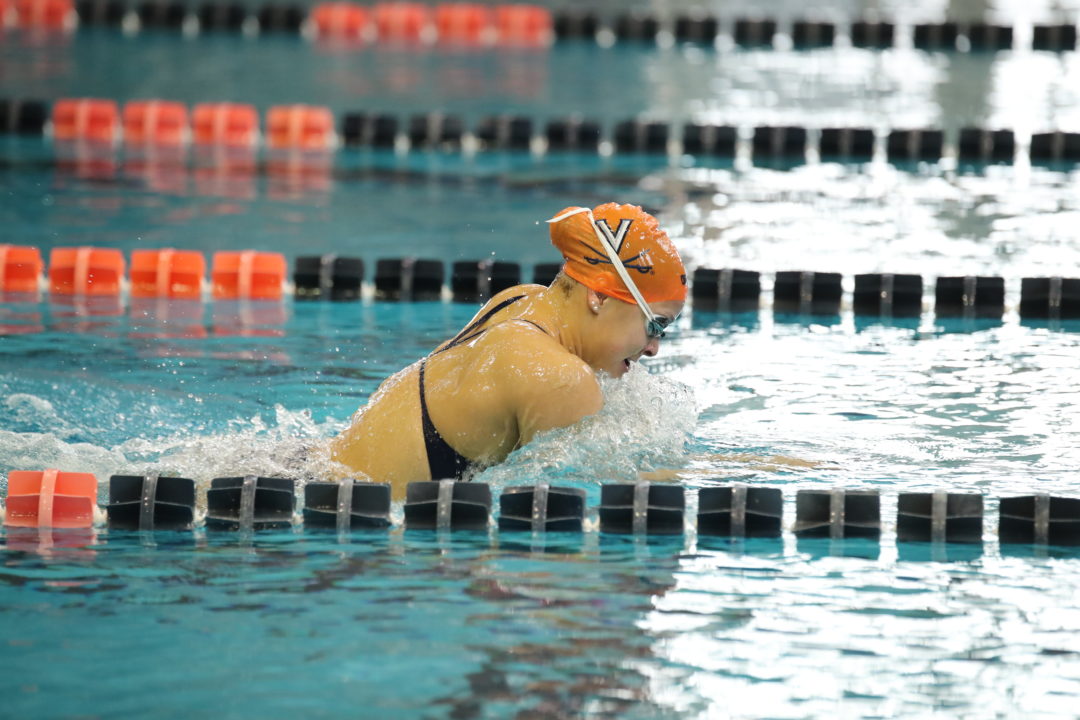 A 26.0 breaststroke split from Alexis Wenger (above) was the difference-maker as the Virginia women opened their ACC title defense with a roar on Wednesday. Archive photo via UVA Media Relations

The University of Virginia women’s swimming & diving team reaffirmed its national championship front-runner status on Wednesday, kicking off the ACC Championship meet with the new fastest-ever time in the women’s 200 medley relay.

The group of Caroline Gmelich, Alexis Wenger, Alexa Cuomo, and Kate Douglass combined for a 1:32.93 in the relay. That breaks the old NCAA, American, and U.S. Open Records of 1:33.11 that was set in 2018 by Stanford.

It was Wenger’s 26.0 breaststroke leg, though, which was faster than anybody aside from Lilly King swam at the last NCAA Championship meet in 2019, that was the real difference-maker for the Cavaliers.

The emergence of Cuomo this season as one of the top sprint butterfliers in the country allowed Douglass to move to the freestyle leg, where she held on for the NCAA Record on the anchor leg on Wednesday.

There are two things that make this record-setting performance even scarier for everyone nationally not named Virginia:

This puts the 400 medley relay record, which Stanford set in 2018 as well in 3:25.09, well within Virginia’s sights. Virginia has the weapons on the front-half to match Stanford’s splits (50.34/58.59) from that record-setting relay, and can probably come close to the 50.36 split as well. Whether they have a swimmer who can, or leave themselves enough room to give back time, on Simone Manuel‘s electric 45.80 anchor split from the previous record-setting time will be the deciding factor there.

The last time would have been Minnesota Invite 2019 where Weitzel went 20.9 50 fr and MacNeil tied the 100 fly

This is going to sound cheesy, but no joke – I got a little choked up watching this race today. Not because of the record swim — just watching this race happen. I didn’t expect that – it just came over me. It’s been a really LONG year. Seeing our sport going again at the very highest level — just awesome stuff.

It is so inspiring to see these college athletes doing such crazy great stuff – UVa & NCS swam the 1st & 3rd fastest time in the history of the event – in a season of such duress & anguish for all of us in the world. Fantastic stuff. Terrific. Bravo.

Kieran smith at sec’s last year in the 500

Me too!! It was amazing and so exiting

It’s on! Congrats to the team. We’re lucky just to have an NCAA season, and seeing 1:32 made me so excited!
They just posted a video too. https://www.youtube.com/watch?v=3WzQGQpBdGg

Yep. But her pullouts are flat out amazing

Wenger was DQ’d at 2015 Speedo Winter Jr Champs (East) for dolphin kick at end of stroke kick. Her times slowed down after that DQ with her trying to eliminate that dolphin kick, and well we can see it came back for collegiate swimming. Underwater video analysis is a must to rid the pool of cheaters (since the officials have to give benefit of doubt – there’s no doubt underwater).

UVA backstroker cut it close on that 2nd underwater 😬

Reeeaaallly close, but just under. It was the perfect breakout.

Bad angle here. ACCN shows it better that she just bareeeeeely made it.

Super close. Even pausing the video I really can’t tell, which I guess means they were right not to call it.