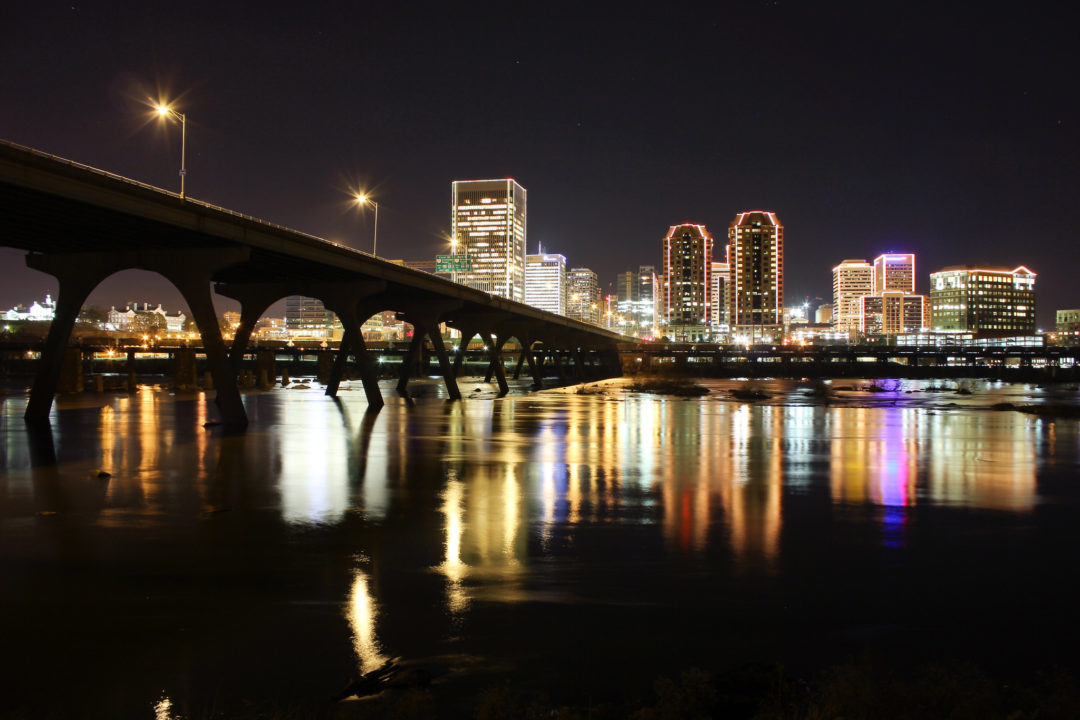 Many of Virginia's most populous areas, including Richmond (above) and the northern part of the state, are not included in the state's phase 1 reopenings. Stock photo via Will Fisher

The states of Virginia and Delaware in the mid-Atlantic region are the latest to allow some easing of restrictions on pools. While Delaware has a relatively-small population, swimming or otherwise, Virginia is home to a huge concentration of swimmers, both recreational and otherwise.

In Virginia, fitness centers and gyms can open as of Friday for outdoor activities only, while indoor activities are still barred. This includes allowing outdoor pools to open for lap swimming only with a limit of 1 person per lane.

This is part of phase 1 of the state’s recovery plan that also allows restaurants, bars, and wineries to reopen at 50% capacity with no more than 10 people seated together and space of at least 6 feet between tables.

Many of the area’s most populous cities and counties, however, remain under phase 0 restrictions, which is a total shutdown. That includes Northern Virginia counties of Loudoun, Fairfax, Accomack and Prince William, plus the cities of Alexandria, Falls Church, and Richmond that are responsible for most of the states positive tests for coronavirus. These areas are also responsible for the state’s biggest population centers, though hubs in Virginia Beach and Norfolk will be allowed to reopen.

A rainy week ahead could inhibit the actual return to swimming in Virginia under these new guidelines, though temperatures are beginning to climb into the 80s, so there should be some swimming available between rain.

Earlier this month, the Northern Virginia Swim League, one of the largest summer swim leagues in the country, announced that it would be cancelling its summer 2020 season.

Virginia has recorded almost 30,000 cases of coronavirus infection through May 15; Friday also saw the state pass a death toll of 1,000.

Delaware, with a population of just under 1 million that ranks it 45th out of 50 states, will reopen community pools (and beaches) in time for Memorial Day weekend. That echos the orders of neighboring New Jersey, with which Delaware shares a continuous beach ecosystem.

The state will still, however, have a mandatory 14-day quarantine period for people coming from other states and a ban on short-term rentals remains in effect. Reports from the state are that police are pulling over anybody without a Delaware license plate and either ordering a 14-day quarantine or returning them out-of-state.

Beaches and community pools can officially reopen at 5PM on Friday, May 22. Pools are limited to 20 percent of regular capacity, and swim lessons and swim team practices are not allowed.

Delaware has recorded 7,373 cases of coronavirus with 271 deaths. New cases there have begun to fall after a late-April spike. Delaware has fared worse than other states with a similar population largely because it has a much denser population than less-populated, but larger, states like Alaska, Wyoming, and the Dakotas.

The City of Tallahassee (Florida) has opened up one of the outdoor 50M pools set up as 21 short course (yards) lanes. One swimmer per lane and swimmers must reserve a lane and time for one hour max. The City has extended the pool hours to accommodate as many swimmers as possible. The reservation times are every 15-minutes so 1/4 of the lanes turnover every 15-minutes reducing the potential contact. Odd lanes enter from one side and evens from the other. Locker rooms are not available and swimmers accessing the pool enter through the gate, answer several questions, have a temperature check. Swimmers leaving exit through a different gate. They have implemented a very good system. The local club teams,… Read more »

Serious question: why do the political leanings of SwimSwam readers skew so conservative (judging from the comment section)? With the locations of swimming hotspots (typically metropolitan areas, Va, Ca, Pa, etc) and the cost of entry into the sport,
you’d think it’d skew liberal. Not making any judgements, I’m just genuinely curious

Careful with your data: you are concluding that comments sections accurately reflect readership. Conservatives use social media to move their agenda much more than liberals do. (For real: I actually lifted that last sentence from a Newsweek article, so cut and paste if you are curious). For all we know, this site is 95% liberals with a very vocal 5% otherwise!

I don’t know the political leanings of SwimSwam’s readership. But I do know what the sport teaches: hard work, mastery of fundamentals, persistence, dedication, and delayed gratification. These are some of the same characteristics necessary for entrepreneurial and small business success. Many of the people who’ve ground through years of 5:30am workouts and lengthy doubles become self-reliant adults who are capable of being responsible for themselves and their families.

Excellent statement. Swimming is a brutal sport measured by the clock and who gets their hand on the wall first. Generally the harder you work the better you become and that translates over to a professional career as well. A swimmer doesn’t expect to qualify for Olympic or NCAA teams just because they wake up in the morning. They realize it comes with hard work, determination and talent. Life isn’t fair or equal to all, but you have a much better chance of success the harder you work, not from the disposition to take from others who found success and have it redistributed.

All: this is way off topic. Let’s reign it in, please.

That’s funny because conservatives are of the mind set that media, both social and traditional are predominantly liberal.

This has nothing to do with politics now. It’s logical vs. illogical and the leaders from Delaware and Virginia have made panicked illogical decisions regarding lock downs and stay-at-home orders. Social distancing, masks, going to swim practices and running swim meets should be up to the individual citizens. I don’t care what the leaders say, I’m not going to social distance, I’m not going to wear a mask and I’m going to go out and do what I want whether that be going to a restaurant, exercising, fishing, etc. I say do what you do…

Swimswam, you have disappointed me.

2020: the year when many of us were told to wear masks, and when many of our state leaders and unelected health directors dropped theirs. Don’t relinquish your civil liberties.

California? Almost every pool in CA is outdoors. They should be open for well organized swim and water polo practices.