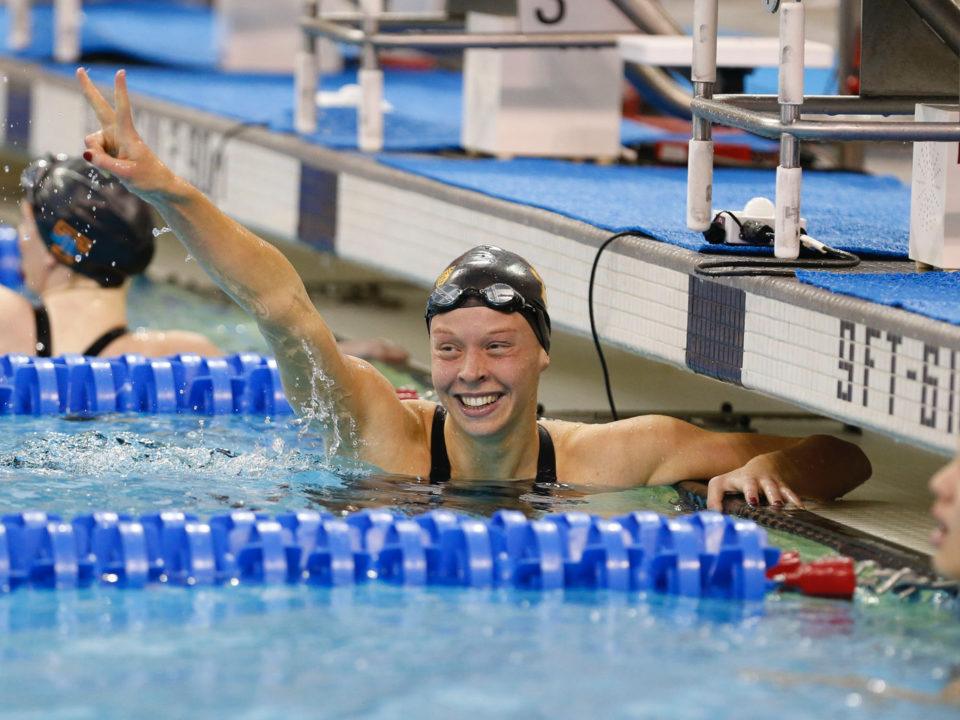 After breaking the Pac-12 Championship Record in prelims of the women’s 100 fly on Friday with a 49.80, USC’s Louise Hansson swam the fastest-ever time in the event on Friday evening. Her 49.34 broke the U.S. Open and NCAA Records of 49.43, set by Louisville’s Kelsi Dahlia – then Kelsi Worrell – at the 2016 NCAA Championships.

Because Hansson is Swedish, Dahlia’s time stands as the American Record.

Hansson split the race effectively the same as Worrell did, but was just barely faster on the opening 50 to make the difference.

Hansson herself finished 6th at last summer’s European Championships in the 100 fly in 57.89.

Her swim is the 5th time that she’s been under 50 seconds, which matches Dahlia for the most ever. Of the 4 fastest performers in history, 3 have swum lifetime bests this season (Hansson, MacNeil, and Brown).

She only dropped a tenth from Pac-12s to NCAAs last year, so I’d be shocked if she got under 49. But…another tenth would still be something on a record like this.

And she gained time between PAC-12 and NCAA in 2017. But this was an awsome race. Would be awsome if Louise could challenge Sarah in scm

Wonder what Sjostrom could go in SCY…she’s 6-tenths faster than Worrell in SCM, so have to believe she could get really, really close to a 48.99.

I think its possible. Would be great if Sarah could come over to the states for some scy race (just a dream) 😁. Also. It would be fun to see Louise race
tapered in scm. Her personal best 56.5 is slow compared to 49.3

Unofficially, I think that is the fastest flat start 50 fly, too (though Dahlia had a 21-point relay split).