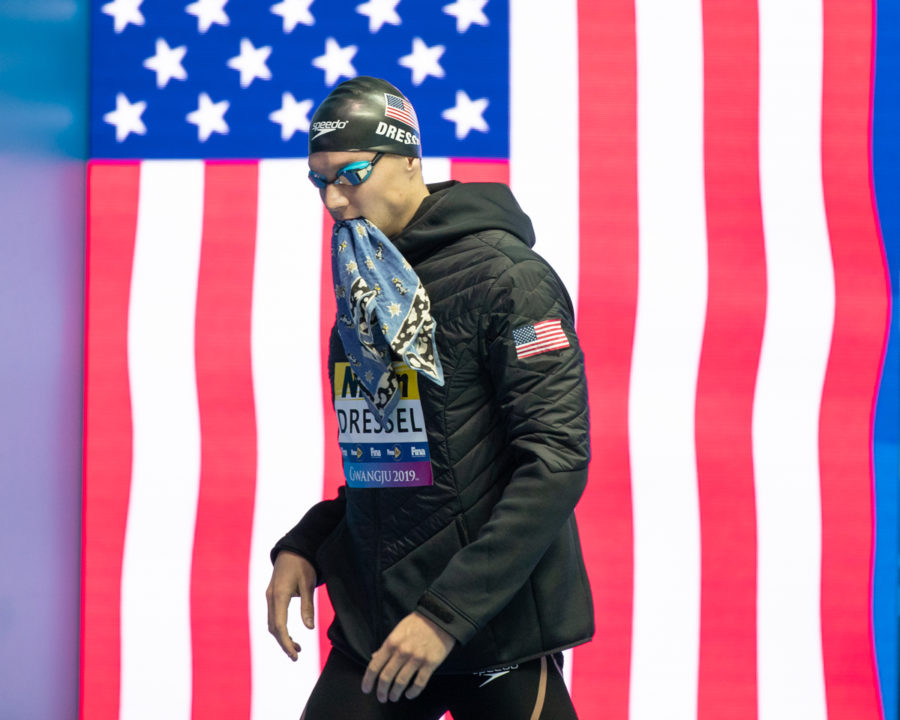 Spoiler alert: there's only one nominee for Male Swimmer of the Year. Archive photo via “Rafael/Domeyko Photography”

USA Swimming has announced the nominees for the 2019 edition of its annual gala awards show, the Golden Goggles Awards. The event will take place on Sunday, November 24th at the JW Marriott at LA Live in Los Angeles, California.

One award won’t be left with much suspense – Caeleb Dressel, as the only individual male champion at the World Championships, is the only nominee for Male Athlete of the Year. He won 4 gold medals individually in Gwangju, broke 4 American Records, and took down Michael Phelps’ hallowed World Record in the 100 fly with a 49.50.

Other debates will rage on more fiercely. Do mixed relay World Records move the needle yet? Do Regan Smith‘s World Records outpace the sheer volume of Simone Manuel‘s medals? Which of Caeleb Dressel‘s 4 event wins was most impressive?

Fan voting will run through Friday, November 15th, with that vote counting as a certain percentage of the final vote, along with a panel of USA Swimming VIPs. Not sure who to vote for? The official SwimSwam votes will be published later today, so stay tuned for a cheat sheet.

Proceeds from the Golden Goggle Awards benefit the USA Swimming Foundation, whose mission is to save lives and build champions – in the pool and in life. In addition to its Make a Splash initiative, a national, child-focused water safety campaign that stresses the importance of learning to swim, the USA Swimming Foundation supports the U.S. National Team and its development efforts aimed at strengthening the future of USA Swimming’s programs and services.

Ledecky nominated for perserance award is kinda lame. Notice Caeleb Dressel didn’t say one word about his motocrycle accident while struggling at pan pacs yet still bounced back and won the 100 fly. Never makes excuses when he loses even when there is one.

Dressel didn’t say a word about his motorcycle accident? Dressel was quoted all over television and media with his Pan Pac motorcycle excuse and spoke at great length about it during the meet. He spoke directly to TV on-deck interviewer Ahmed Fareed about it on coverage of Pan Pacs during the meet, even assuring it received coverage here in Australia and elsewhere worldwide.
https://swimswam.com/caeleb-dressel-crashed-motorcycle-in-late-june-nearly-missed-nats/
https://www.swimmingworldmagazine.com/news/caeleb-dressel-hurt-in-motorcycle-accident-in-june-almost-missed-nationals/
https://www.sbs.com.au/news/accident-affected-dressel-s-pan-pacs

Maybe cause the accident wasn’t bad

He was spotted walking with a boot on and was out of the water because of injury. I’d prefer to embrace Ledecky’s illness than go through whatever accident kept Dressel from getting wet.

Truth be told, his IG revealed him to be bootless on a fishing boat with some buddies around the timeframe of the “motorcycle accident.”

I watched all of the 2018 Pan Pacs TV coverage, and Dressel actually did a lengthy on-deck “motorcycle accident excuse” interview with NBC’s Ahmed Fareed during the meet, followed by numerous interviews about it for other media outlets. Confirmation of the Dressel-Fareed interview, as noted right here on SwimSwam…
https://swimswam.com/caeleb-dressel-crashed-motorcycle-in-late-june-nearly-missed-nats/

15
0
Reply
Coach
Reply to  Chlorinated One

I think the coaches are those whose athletes won an event at Worlds.

USA Swimming has very specific rules on nominees for these awards (which is why only Dressel is nominated for men.)

What is the criteria for the Perseverance award? That, plus breakout performer, seem like they have to be fairly subjective.