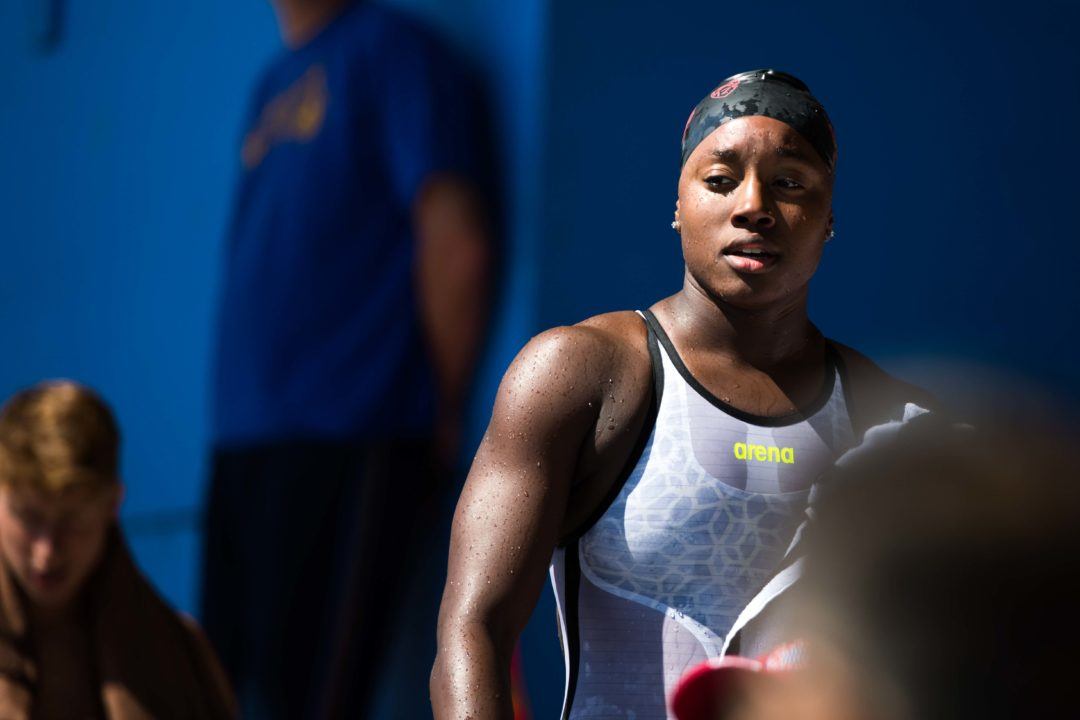 Simone Manuel (above) led off in a lifetime best, and her Stanford teammate Katie Ledecky had a big bounce-back swim as the Americans broke a National Record. Archive photo via Mike Lewis/Ola Vista Photography

A streak of 4 consecutive World Championships in the women’s 800 free relay came to an end on Thursday for thee American women, in spite of swimming under the World Record. Their 7:41.87 lost out to Australia’s 7:41.50, with both going under the old World Record of 7:42.08 set in 2009 by China.

The old American Record was set in 2009 by the team of Dana Vollmer, Lacey Nymeyer, Arianna Kukors, and Allison Schmitt.

The fastest split for the 2019 American Record relay was done by Katie Ledecky in 1:54.61. Under other circumstances, that would not be significant, as Ledecky is currently the country’s top 200 freestyler. Given that she had to scratch the individual 200 free prelims and the 1500 free finals just a few days ago, and only returned to the water this morning, that she had the 3rd-fastest split of the field is momentous. It’s not quite a “Michael Jordan flu game” moment, but it is still can maybe the emotional lift that the Americans need to finish strong at a meet of disappointments.

Other splits of significance for the Americans: Simone Manuel swam a best time and is now the 7th-fastest American in history in the event: her previous fastest was 1:57.01 on a flat start. Further, Melanie Margalis was 6-tenths faster than she swam in this relay final at the 2017 World Championships, and Katie McLaughlin‘s swim was 1.12 seconds better than her flat-start lifetime best. In a week where the Americans have had lots of challenges, all 4 swimmers in this race had good swims by their own standards.

It looked like the current American wave was losing out on its best chance to break this record, with the ‘super relay’ that was to include Missy Franklin (retired) and Allison Schmitt (moving past her athletic prime) never putting the full relay together. But with a gutsy performance from a sick Katie Ledecky, with Katie McLaughlin returning from a serious injury to her previous trajectory, with Simone Manuel being able to do just enough to extend her range from the 100 free, and with Melanie Margalis continuing to be a rock of versatility for the Americans, the American Record and silver comes away as a consolation prize.

I don’t agree it’s a meet of disappointments.. the Americans are leading the medal tally

Agree. The swimmers there have done well by and large–the selection process is for another day. Australia is having a good meet this time and we shouldn’t let our arrogance get in the way of a fair analysis of how the team is doing.

I was debating this myself…I think it ‘appears’ to be disappointing because you don’t have Americans making the finals in every event, let alone 2 Americans, let alone 2 Americans on the podium. That’s not necessarily to say that USA is having a TERRIBLE meet. I do think the loss of Ledecky in the 400, perhaps lack of any medals in some events is a result of some ‘off’ swims…but when you are breaking American records here or there, or getting close to world records whether in victory or defeat, AND for someone like Kathleen Baker who was seeded 1st in 50 back only to get 6th, but the fact her time was literally .3-.4 seconds away from winning, that’s… Read more »

indeed , much better ( no fluke 400 free relay for example )

Not to mention King’s disqualification in the women’s 200 m breaststroke.

If there is one tournament to sacrifice it’s the Pan Pacs not the FINA World Aquatics Championships.

Nicely written, Braden! Thanks for all your hard work during this meet!