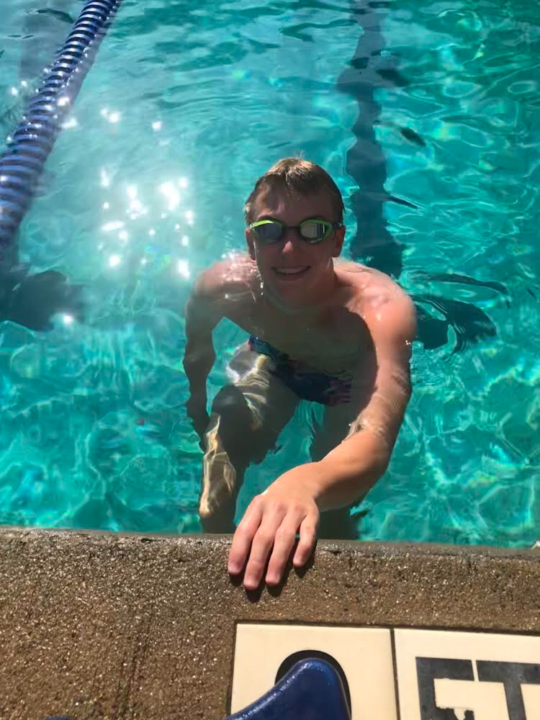 Cooper Sever has completed the 24 hour swim that he was attempting in honor of his uncle Chris Wooten, a North Carolina police officer. Current photo via Michael Sever

At 6 pm on July 21, Cooper Sever jumped into the Eaman Park Pool in Salisbury, North Carolina with 2 goals: to swim 30 miles over the course of 24 hours for his uncle Chris Wooten.

Sever, a sixteen year old competitive swimmer decided to take up the task of completing the 24 hour swim in order to raise money for the Shepherd Center in his uncle’s honor.

Swimming in cycles of 30 minutes in the water, 30 minutes rest, Sever completed the full 24 hours, while coming in just short of 30 miles.

The swim proved to be a difficult task as Sever recalls, “I was exhausted throughout the night because I didn’t get much sleep”, later saying he only got approximately 4 hours of sleep over the 24 hour span.

During the swim, Sever’s family helped him stay on course in the pool, “Around 2 am, my sister and a bunch of her friends threw a bunch of glow sticks into the pool, which was really cool.” As Cooper’s father and coach Michael Sever explained, “We knew that Cooper would hit a block around that time, so the glow sticks were important as they were a way to change up the environment for him.”

Outside of the pool, Sever took ice baths, hydrated, and took 10-15 minute naps. “His nutritional plan was primarily electrolytes…but he didn’t eat any solid food except for bananas and a pancake in the morning,” Michael Sever recalls.

At the end of the swim, friends and family joined in, watching Sever complete his final few laps, “During the last 100, we had about 8 additional people lined up who swam alongside Cooper to the last 15 meter mark, and then his sister swam to the wall next to him.”

Cooper recalls the finish, stating, “the ending was good, they had all of the little kids from my pool lined up with horns and confetti poppers. They then pelted me with confetti.”

Despite the ups and downs surrounding the swim, Cooper says he’s looking forward to trying to do the swim again next year.

I just want to say thank you to everyone who has helped me on this incredible journey. Something that was just a thought blossomed into this remarkable event and I'm so happy that it turned out the way that it did. Today I did my 24 hour 30 mile swim. This feat was one of the hardest and most mentally determinated things that I have done in my entire life. I remember my first hour was amazing, around 1 am is when it hit. I struck a walk that seemed unbreakable, but with the help of the people that I was with I was able to break past that wall. Thank you to everyone who came and supported me today, I honestly wouldn't have been able to complete this swim without you guys, you were the reason that I kept pushing. I can't thank you guys enough for everything that you have done for me in my efforts, the news crews, my support team, my swim partners, everyone. Thank you. And I want to give a major shout-out to @brodydillon01 who besides from my family, and swim partner stayed with me throughout the night, was constantly checking on me and making sure that I was ok. As well as Trent for swimming almost every single lap with me and making sure that I was ontop of my game throughout the entire 24-hour. But of course I wouldn't be able to do this without my uncle, his determination and will power helped me get through this swim, helped give me the courage to succeed and finish the swim. Thank you so so much and keep moving forward ❤️ (Stay tuned for next year 😉)

Cooper Sever swims during the sunrise. Via Michael Sever, used with permission.

Cooper Sever at the beginning of his 24 hour swim. Via Michael Sever, used with permission.

Glow sticks light up the bottom of the pool during Cooper’s swim. Via Michael Sever, used with permission

How can you not love this??