Unsuited NC State Men Nearly Get Under 1:24 in Medley Relay During Day 2 Dominance 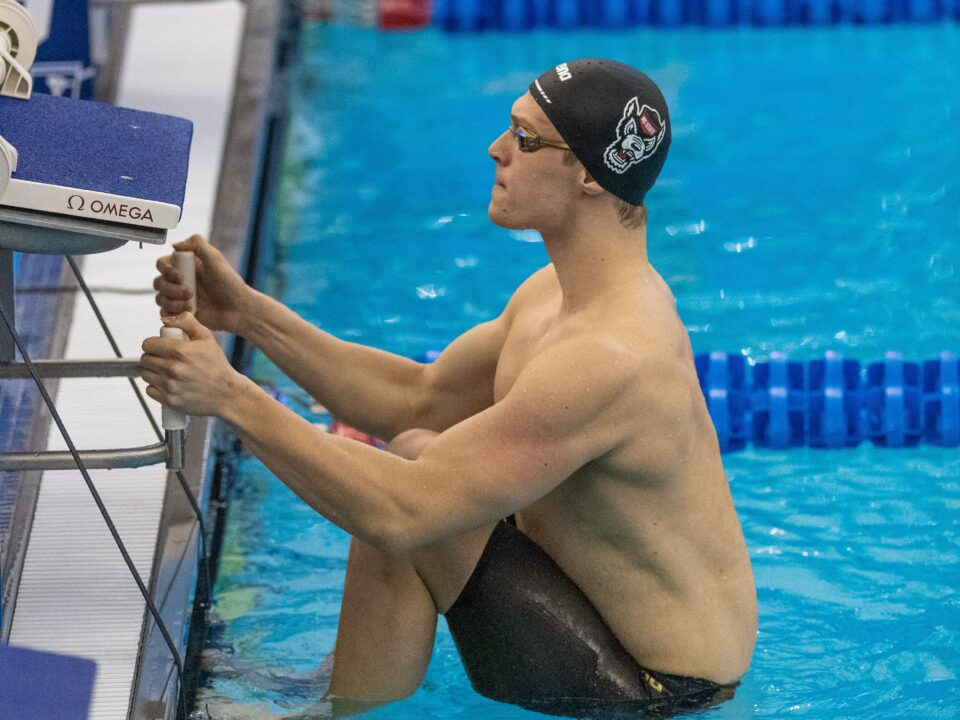 The Wolfpack men swam also cracked two pool records as they defeated ACC rivals UNC and UVA by wide margins to wrap up Day 2 of competition.

The action on Day 2 of the tri meet between UVA, UNC, and NC State shifted from Chapel Hill to Raleigh on Saturday, and the Wolfpack men defended their own pool with gusto, winning all except one event and capturing a couple of pool records in the process.

NC State began the meet with a big 1-2 win in the 200 medley relay. The ‘A’ team of Kacper Stokowski (21.19), Mason Hunter (23.97), Nyls Korstanje (20.31), and David Curtiss (18.87) combined for a time of 1:24.34. That’s a strong time for a January dual meet, and it was doubly impressive since it was done in practice suits. All those guys except Hunter swam on NC State 3rd place relay at the 2022, and Hunter is swimming just as fast, or faster than Rafal Kusto was at this point last year, so watch for the Wolfpack to be in the mix at Nationals again.

Much of the day wasn’t even close, as the Wolfpack swept the top three spots in four of the seven individual events. Will Gallant got the individual events started with an 8:59.86 win in the 1000 free, leading a 1-4 Wolfpack sweep. Next, Luke Miller won the 200 free in 1:34.41, leading a 1-3 NC State sweep and setting a new pool record at the same.

Miller was part of another 1-3 NC State sweep towards the end of the meet. Teammate Nyls Korstanje won the 100 fly with a 46.31, but Miller was right behind him at 46.51. Defending NCAA 100 back champion earned the win in that event today, going 46.48 as NC State took the top three spots.

The breaststrokes have long been a (relative) weakness for NC State, and UVA’s Noah Nichols has been swimming consistently fast all season, so if you had to pick one event for the Cavaliers to nab today, that might have been the logical choice. But, Mason Hunter has been a great graduate transfer for the Wolfpack, and he upset the UVA junior by winning the 100 breast, 53.27 to 53.40.

The Tar Heels came within in a whisker of a win today, as diver Alexander Hart finished 2nd behind Bennett with 368.45, just 0.25 points shy of the Wolfpack diver. Outside of diving, UNC’s best finish came in the 100 fly, where Boyd Poelke touched 4th with a time of 47.18.

With just over three weeks until the ACC Championships get underway, the NC State men look to be the clear favorites. The biggest challenge for Braden Holloway and staff be deciding exactly which swimmers to leave off the roster — it looks like they have far more than 18 potential ACC scorers. Virginia doesn’t typically show a lot of speed until February, so they appear to be about where they’ve been the last few years, assuming all of their big guns swim ACCs — something that hasn’t always been the case in recent years, for one reason or another. UNC should show a little more life at ACCs than they have so far this season, but they’ll likely again rely on diving for a good chunk of their points.

This was the final dual meet of the season for UVA, while NC State will take on both Texas and UNC-Wilmington next week in a split-squad format, and UNC will face Duke at home this upcoming Friday.

Was Quintin McCarty at this meet?

No, word is he is out with a back injury.

NCState will be in NCAA mix with ASU and of course Cal/Tex. Depth and quality from Sprint to Distance is equal to others. It will be a fun March.

List of phrases that swimmers use that sound dirty

Excited to see the Wolfpack compete in Texas next week. We saw what they were capable of this week and the competition was minimal. Next week every point will count and it’s sure to be electric.

Agree with this. I think this meet will be super interesting and really fun to watch as we near conference and NCAA champs and these kids are starting to swim really fast. Wondering if NCS/Texas will be suiting up at the meet. If so, we could see some seriously fast times, especially in Texas’s pool.

Yes….it looks like both teams will be suited.
Exciting meet ! Expecting in depth coverage from the gang at SWIMSWAM since it is in Austin. Will it come close to rivaling the ASU hoopla at Mona Plummer?
Can’t wait !

“competition was minimal”? that’s a little rude to the other swimmers that were there, trying their best, huh?

Swimming needs to get more rude

Most impressive aspect of this weekend was the depth NC State had on relays.

”shifted from Chapel Hill to Raleigh”. There is a school in Durham, but they were not involved in this meet. People in the Triangle are a bit parochial when it comes to their respective towns.

Best Duke joke I ever heard was from a local politician who once joked he lived in North Carolina his entire life except for the 4 years he spent as an undergrad at Duke.

I’ll be here all week, try the veal.

veal is cancelled. try the beyond burgers?