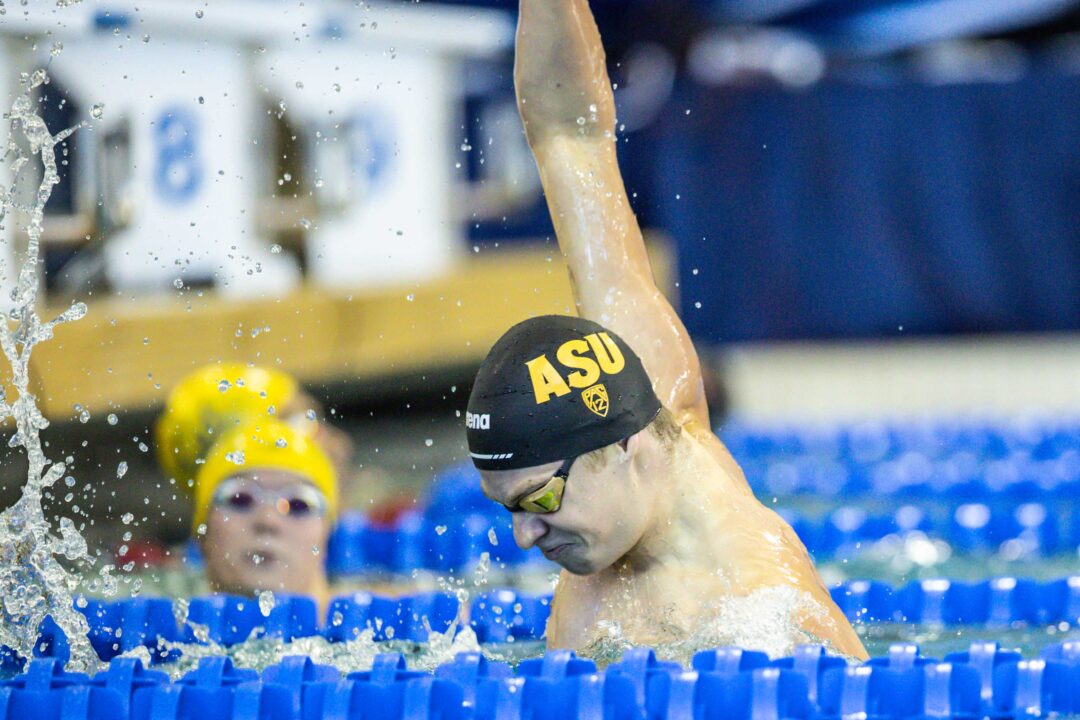 After finishing second in the event at last year's NCAAs, Arizona State's Leon Marchand has now set the NCAA Record in the 400 IM. Archive photo via Jack Spitser/Spitser Photography

Marchand was faster today than Gonzalez was in back and freestyle. Marchand’s biggest difference here from his swim at last year’s NCAA Championships was his middle 200. He was faster today on his 100 back and 100 breast by over a second, notably getting under the 1:00 split on the breaststroke leg.

Marchand’s time is the top time in the NCAA so far this season by a huge margin. Notably though, defending NCAA champ and previous NCAA record holder Gonzalez was absent from Cal this fall, thus not swimming it at all this season until today when he swam a 3:57.92 to finish fifth. Gonzalez made his return in yesterday’s Cal vs Arizona dual meet and was not suited up today with his 3:57.92.

Top Times in the NCAA this season: Men’s 400 IM

This was Marchand’s third individual event at ASU’s dual meet against Cal. Marchand had already swum NCAA-leading times today in the 100 and 200 breaststrokes before breaking this record in the 400 IM. It is estimated that there were about 35 minutes between Marchand’s 200 breast and 400 IM.

Marchand now owns both NCAA records in the IM events as he swam a 1:37.69 in the 200 IM at last year’s NCAA Championships.

I remember the first time as a kid that I saw someone go under 4:00 at a meet eons ago and thinking that was the coolest thing ever.

Marchand would’ve more than lapped that dude. Crazy to think about at a dual meet!

Wonder what times he will swim in Paris 24 🙂

At this point is it still a stretch to say he could go after sub 4 next year?

I’m thinking 4:01 low to mid in the 4 IM, but nothing would surprise me at this point

If fina still gives out NFTs for WRs in fukuoka, I hope marchand gets a bobo-themed one

Congrats Léon!
It was just a matter of time.
And thanks to Bob for helping him become a double world champion last year, become the next 400 IM world record holder (next summer?) and a double olympic champion next year at home. It’s very nice from the part of the next US men’s team coach at worlds to help a foreigner break Michael Phelps’ world record and beat the Americans at international competitions. It’s very appreciable. All the French naysayers who don’t know anything about swimming and criticized Bob when he trained Agnel are now pretty silent! 😆
It will not be easy for Bob at worlds. He’s the coach of the US men’s team. There will… Read more »

Good morning Bobo!
Leon brought Bobo back what can he not do

Welcome back. You’ve been missed.

Why not do both?

Same session for prelims/semis/finals in paris. Rough to do 6×200 in 2 days then still have stuff to do after (relays and 200 IM)

Bobo, welcome back. But I think you have it wrong on the American swimming community’s view of Bowman’s mentorship of Leon. Phelps’ swims are classic but records are made to be broken, and everyone loves to see a great swim. Even Phelps has been exhorting good swims out of Leon. Frenchie can fly!!

Leon and that WR line for the 400 LCM have a date with destiny.

The yards records is nice, but we all know the LCM race is much tougher.

True, but in every race the competitors all face the same relative challenge.

Best swimmer in the world rn

Dont be sleeping on Duncan Scott

Those times and splits are similar to Seliskar by the time of his senior year at Cal.