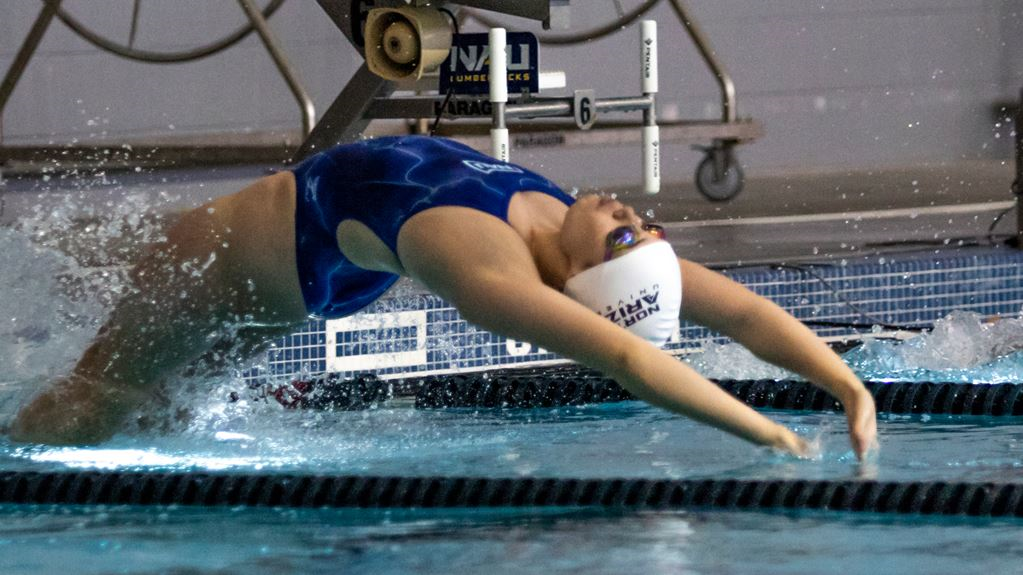 Northern Arizona women maintained their lead after Maddy Rey won the 400 IM with a school-record time of 4:15.32 and a 2-second lead over the field. Archive photo via Northern Arizona Athletics

Air Force’s Adam Grimm defended his 2021 WAC Championship title in the men’s 400 IM with a time of 3:46.22, breaking the Air Force program record set in 2006 by more than 2 seconds. UNLV freshman Dominik Bujak touched the wall second with a time of 3:47.59, the second-fastest 400 IM ever swam by a Rebel.

NAU’s Maddy Rey dominated the women’s 400 IM, finishing with a 2 second lead over the field with a school record time of 4:15.32, taking nearly 2 seconds off Niamh McDonagh‘s record from 2019. This was a huge swim for Rey who finished 4th in this event in 2021.

New Mexico State’s Lindsey Puhalski took 2nd place (4:17.29) as the only other swimmer under the NCAA ‘B’ cut.

UNLV’s George Ratiu touched the wall first in the men’s 100 fly with a time of 46.10 tonight and coming within .18 of the WAC Conference record. This ranks him as UNLV’s second-fastest 100 butterflyer of all-time.

Defending champion Bryan Chavez of UNLV took 2nd with a time of 47.16, .18 faster than his winning time last season.The top 4 swimmers cracked the NCAA ‘B’ cut.

Grand Canyon’s Emily Muteti touched the wall first in the women’s 100 fly with a time of 53.34, out touching Northern Colorado sophomores Katelyn Bergin and Payten Irwin who took 2nd and 3rd place as the last swimmers under the NCAA ‘B’ cut.

This was a school record for Muteti by .44 and defended her 2021 Championship title in the event.

Air Force’s Wen Zhang set the men’s 200 free WAC Conference for the second time this meet, blasting a 1:32.21 in the final to break his two-day-old record by 1.18 seconds and win with a 2.3 second lead over the field.

Zhang’s swim was the closest anyone has gotten to an NCAA ‘A’ cut so far this meet, just .16 off the cut. The top 4 swimmers in the final snuck under the ‘B’ cut.

UNLV’s Samuel Willstrop won the 100 breast with a lifetime best and school-record time of 52.36, dropping exactly one second from the time that earned him first place at last year’s WAC Championships.

Second-place finisher Jonathan Reiter of CBU was the only other swimmer under 53.00 with a time of 52.80. An impressive total of 6 swimmers beat the NCAA ‘B’ cut in this final.

GCU first-year Maria Brunlehner collected her second individual WAC title this year in the women’s 100 breast with a time of 1:01.05, narrowly missing the school record by .03. Northern Colorado’s Bryanna Ungs claimed 2nd with a time of 1:01.60, out touching Raphaela Nakashima by .39 to prevent a 1-2 GCU finish. Brunlehner and Ungs cracked the NCAA ‘B’ cut.

UNLV’s Panos Bolanos, coming off his 200 IM win last night, took down the men’s 100 back with a time of 46.89 and a .70 lead over the field. This shaved .10 off his lifetime best and maintains his place as UNLV’s third-fastest 100 backstroker in history.

CBU’s Jacob Leahy took 2nd place as the last swimmer under the NCAA ‘B’ cut.

Northern Colorado’s Madelyn Moore crushed the women’s 100 back final, winning the race in a lifetime best and school-record time of 53.14 with a 1.5 second lead. She came within .22 of the WAC Conference record set in 2013 by Denver’s Samantha Corea and was the only swimmer under the NCAA ‘B’ cut.

Moore earned 3rd place in this event at the 2021 WAC Championships.

This is Gonzalez’s third 2nd-place finish of the meet and Honer’s second win of the meet.