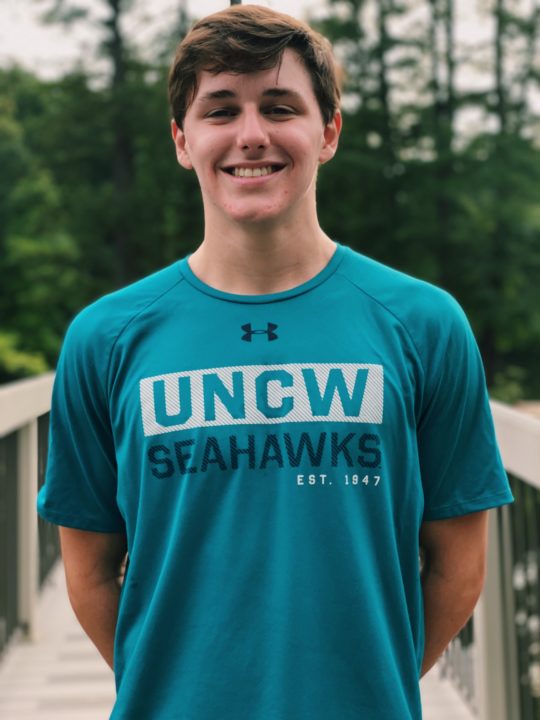 Duffy lopped almost two seconds off of his old best. He was 1:57.64, over a second ahead of the rest of the field. Current photo via Aidan Duffy

The NOVA of Virginia twins Grace and Caroline Sheble topped the 200 fly this morning, with Grace at 1:55.16 ahead of Caroline’s 1:56.30, the NC State commits both less than a second from bests.

Sheble pulled a tough double, with only the 50 back in-between, as she clocked a new best of 2:12.86 in the 200 breast. She was second behind TNT Swimming’s and Michigan commit Letitia Sim, who was 2:11.95, over two seconds off of her best; expect her to drop, potentially past 2:10, tonight. 200 back champion and NOVA of Virginia standout Josephine Fuller was third in 2:13.02 and Racer X Aquatics’ Zoe Skirboll fourth in 2:14.28, both clocking new lifetime bests.

Duffy, a UNC-Wilmington commit, lopped almost two seconds off of his old best. He was 1:57.64, over a second ahead of the rest of the field. INspire Swim Team’s Luke Barr was second in 1:59.11, three seconds off of his seed, so that could be a tighter battle tonight. Barr is an Indiana commit. OLY Swimming’s and Ohio State commit Michael Cooper and Machine Aquatics’ and Cincinnati commit Tyler Lentine, touching third and fourth in 1:59.22 and 1:59.62, respectively, broke two minutes for the first time.

The fifth and final swimmer under 2:00 was Daniel Worth at 1:59.83, two seconds off of a best. Worth is committed to Virginia.

The 50 back was also very stacked, as nine boys went by the 23-second barrier. At the top of the prelims was iNspire Swim Team’s Nate Germonprez at 22.08, with Barr and Flood Aquatics 16-year-old Joshua Zuchowski tied at 22.23 ahead of Hinsdale Swim Club’s Grant Bochenski, a Mizzou commit. Also getting under 22.5 were 15-year-old Hudson Williams (22.32) of New Albany Aquatic Club and 16-year-old Sam Powe of McCallie GPS Aquatics (22.33).

INspire got another top finish in the 200 fly, as Alabama commit Mateo Miceli posted a 1:45.87, a bit off of his best.