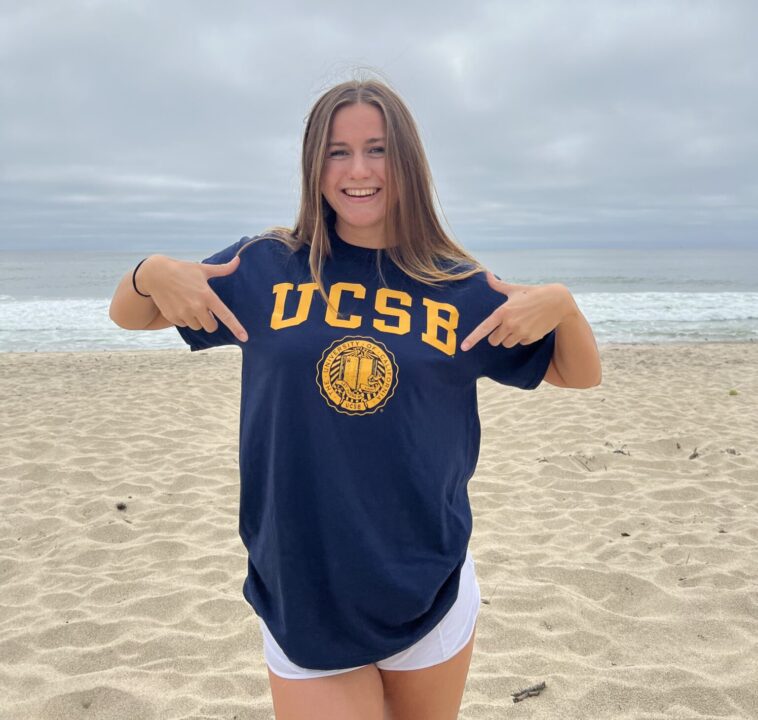 Eugenie Lanilis, a California Native and 2022 Summer Speedo Juniors Qualifier, has announced her verbal commitment to UC Santa Barbara. She is expected to arrive on campus ahead of the 2023-2024 season.

I am beyond excited to announce my verbal commitment to swim and study at UC Santa Barbara! Thank you so much to all my family, friends, and coaches for supporting me along the way! Go Gauchos!

At the 2022 California High School State Championships in May, Lanilis competed in the 50 and 100 freestyles. In the 50, she went 23.86 and finished 20th. She was only .24 off her best time, which was set the previous month.

The University of California Santa Barbara competes in the Mountain Pacific Sports Federation Championships (MPSF). At the 2022 Championships, they finished 4th out of 9 teams.

Lanilis’ current best times would place her solidly in the B-final at last year’s MPSF championships. In the 50 free, she would have been 13th overall, finishing 2nd for the Gauchos. In the 100 free, she would have tied for 11th with UCSB’s Marriott Hoffmann. Hoffmann was a junior last year, but is not listed on the current roster. Current junior Reagan Nibarger finished 7th in the 50 and 8th in the 100.

Joining Lanilis in 2023 will be fellow Californian Makena Leacox, a breaststroke and IM specialist. Her best 100 breast time would have placed 4th at last year’s championships, ahead of UCSB’s Sydney Rouse and Tyryn Empremsilapa who finished 7th and 8th, respectively.