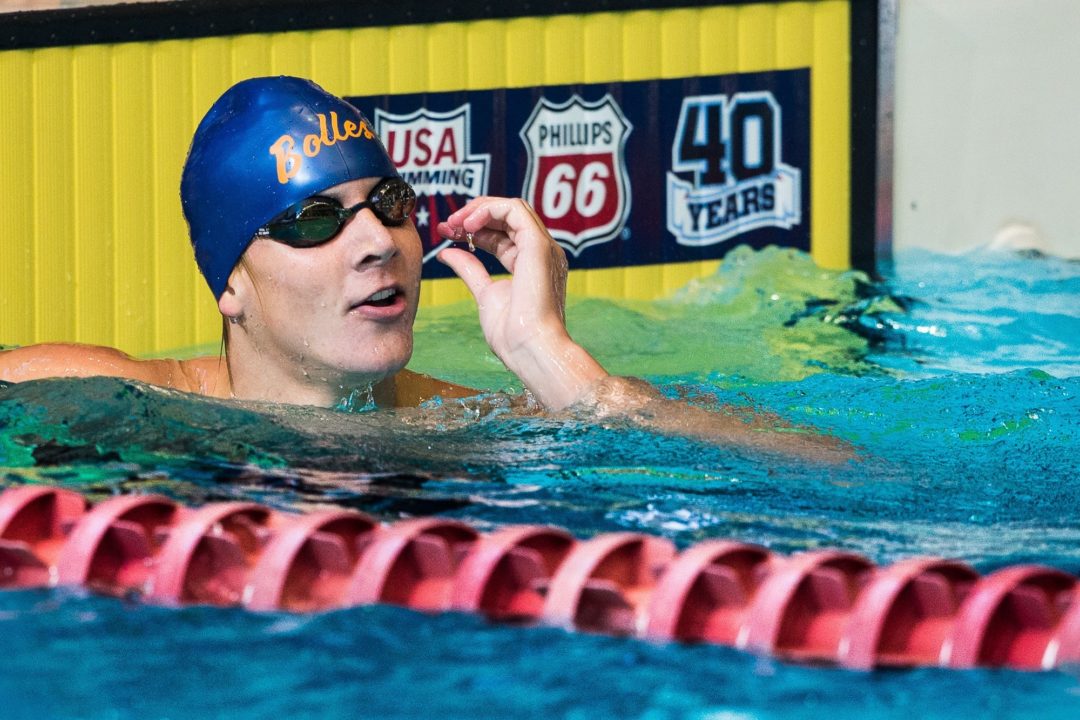 Caeleb Dressel is the top seed in all sorts of races this weekend, where he'll make another charge at the NAG record book. Archive photo via Tim Binning/TheSwimPictures.com

USA Swimming’s Winter Junior Nationals will kick off tomorrow morning in Greensboro, North Carolina. The top 18-and-under swimmers in the nation will compete for junior national titles and National Age Group records Thursday through Saturday, following the traditional 3-day meet format used at meets like the NCAA Championships. Here are 5 storylines to keep an eye on over the weekend:

1. Dressel and Hoffer head-to-head: Thursday night will be a rare opportunity to see two of the best youth sprinters in all of American history in the same pool. All-star high school senior Caeleb Dressel will compete for the Bolles School Sharks swim club just a month after breaking the national high school record in the 50 free at the Florida State Championships. But Dressel’s outstanding 19.29 wasn’t the only headline-grabbing swim of that weekend – across the country in Arizona, 15-year-old Ryan Hoffer was smashing one of Dressel’s old National Age Group records, going 19.55 to win his state title in the 50. But this weekend, instead of a cross-county competition with times compared online, we’ll get to see both boys in the same pool at the same time. Can either lower his own NAG 50 free record? Can either go fast enough in the 100 to grab another record? (Hoffer was about six tenths off of Dressel’s 15-16 NAG 100 free record, Dressel was about a second off of David Nolan’s 17-18 version). No matter what, swim fans will get to see the bright future of American sprinting on full display.

2. The hunt for NAG records: with almost all the best 18-and-under swimmers all competing in one place, the National Age Group record book is almost sure to be under assault. Dressel and Hoffer are just the beginning – breaststroker Lindsey Horejsi looks to break 1:00 and take down a 15-16 record, 14-year-old Michael Andrew seems to add a new NAG record every other day, and the relay events might be the most at-risk. NCAP already broke several of the relay records last weekend at nationals and won’t be competing this weekend. But Dressel and the Bolles School should be on the war-path on the boys side, and SwimMAC also looks to make a charge led by backstroker Kathleen Baker. Keep an eye on that record book, because it could change drastically over the course of three days.

3. Last short-course looks for incoming NCAA prospects: For many of the top incoming NCAA freshman, this will be one of the last short-course competitions before entering college next fall. The list of big-name prospects is huge: there’s Florida-bound Caeleb Dressel. There’s future Stanford Cardinal Curtis Ogren. Kylie Stewart and Megan Kingsley are headed to Georgia. Lindsey Engel and Ally Howe have signed with Stanford.  Top girls butterfly seed Danielle Nack is a future Minnesota Gopher, and top boys backstroke seed Hennessy Stuart will head to NC State. Since the NCAA is all conducted in short-course, this will be a great opportunity (and for swimmers without a high school season upcoming, perhaps the last big opportunity) to show exactly what kind of an impact they can be expected to make at the college level. In addition, a few lesser-known swimmers will always ‘pop’ as high school seniors – this weekend will tell us which college teams hit it big with a fast-rising recruit.

4. Michael Andrew: the youngest pro in the nation is entered in 9 individual races. Andrew could just about fill a book with the NAG records he’s already taken down, but everytime he swims, he seems to add more to his collection. Andrew, who turns 15 in April, only has a few more months to rewrite the 13-14 year-old record book before moving up to the next level. Though his ultra-low yardage, high-quality training technique has its fair share of critics, there’s no denying that the Kansas youngster is an absolutely electric force in the swimming world right now.

5. Duel in the Pool tune-up for Kathleen Baker: The SwimMAC 16-year-old will represent Team USA at the Duel in the Pool next weekend in Glasgow, but is also entered here, though only in two individual events. Baker will swim backstrokes for the US, but will test some of her other strokes at Juniors, swimming 100 fly and 100 breast. It’s also likely she’ll be a part of SwimMAC’s NAG-chasing relays – keep an eye on her performances, as she’ll likely look to build some momentum heading into next weekend’s showdown with Europe, which looks to be one of the closest Duels in the Pool in the meet’s history.

Good article, but you’ve got the locations backwards. Seniors was in Knoxville last week. Juniors is in Greensboro this week. Can’t wait!

Paul Powers will be in the mix

Incoming Michigan freshman – definitely a name to watch. Another is his future Wolverine teammate Clara Smiddy on the women’s side

Short course season is only halfway through. Admittedly there aren’t many big short course meets left, but with swimmers like Michael Andrew that doesn’t seem to matter. Also, there’s NCSA Junior Nationals in March, where they swim short course in the morning. So I would have to disagree with point 3.

Ncsa juniors is all short course in non-olympic years

The men’s and women’s sprint will be great to watch with Dressel, Hoffer, Engel and Weitzeil.
3 girls can break the minute on breaststroke with Horejsi, Poppe and Lohman.
Gunnar Bentz and Ella Eastin should win the IM races with great times.

I hope you will do a little preview of the Tom Dolan Invitational with also some of the best US youngsters like Sinead Eksteen, Lea Gwennap, Emily Meilus, Carsten Vissering, Janet Hu, Andrew Seliskar, Cassidy Bayer, Reece Whitley, Destin Lasco or Allie Szekely.

Did anyone notice that Michael Andrews times from last weeks nationals were a few seconds slower than he had been earlier this fall? Was there any particular reason like maybe he was sick? With his type of training would we expect any type of taper where he may be back in form this week?

Bobo, Thanks for the reminder about Reece Whitley at Dolan,
he was in another league there last year…It will be exciting to
watch his swims.

Wutang. Junior nats does not imply amateur status. If Andrew wants to cash in great! He made the decision. Let it be and enjoy the fast swimming. This will be a more common occurrence over the next decade as more money enters the sport IMO.