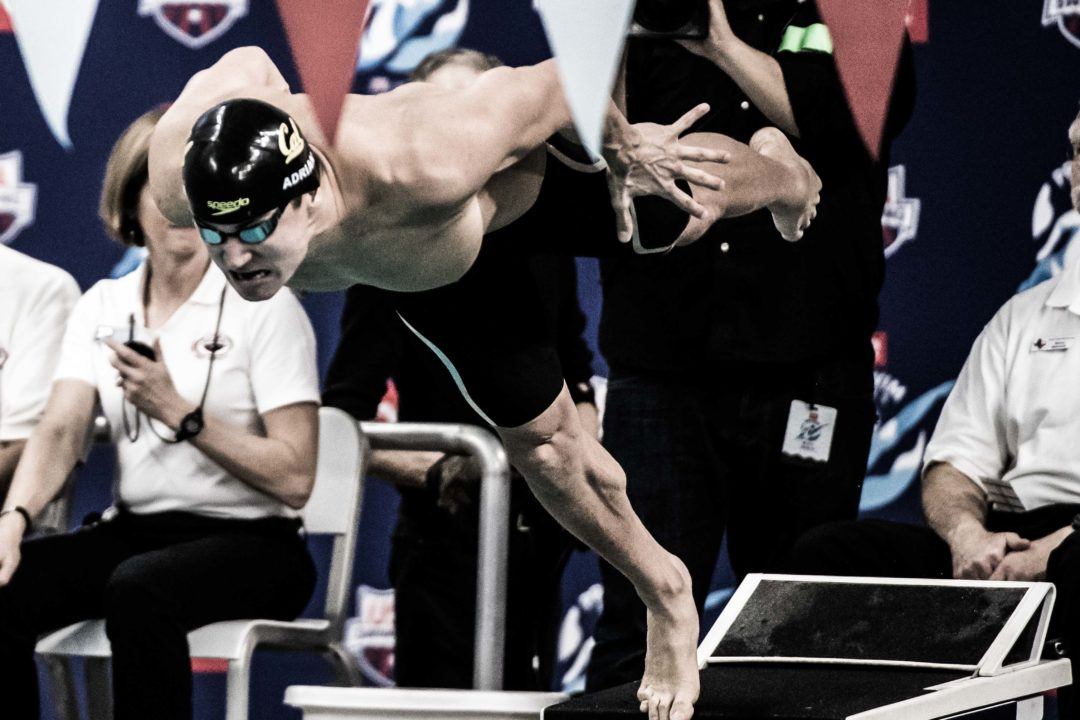 Nathan Adrian will be among those competing at the 2018 TYR Pro Swim Series - Atlanta. Archive photo via Mike Lewis/Ola Vista Photography

The psych sheets for this weekend’s TYR Pro Swim Series meet in Atlanta have been released, and it’s time to get excited because there will be an embarrassment of riches competing at the McAuley Aquatic Center beginning Thursday.

The majority of the top Americans will be in attendance, along with plenty of international stars. Internationally on the women’s side we have Sarah Sjostrom, Yuliya Efimova, Penny Oleksiak, Taylor Ruck and Federica Pellegrini, among others. The men’s list includes Vlad Morozov, Felipe Lima, Bruno Fratus, Andriy Govorov, Erik Persson, Ryosuke Irie, Joao De Lucca and Marcelo Chierighini.

Since we’re in the midst of the NCAA championship season, not a lot of the college kids will be competing this weekend (Mallory Comerford is one of the few), but it seems nearly all of the top pros are. Some of the women in the mix include Leah Smith, Olivia Smoliga, Melanie Margalis and Hali Flickinger, while the men will have the Cal squad (Nathan Adrian, Ryan Murphy, Tom Shields, Josh Prenot, Jacob Pebley), the Texas squad (Jack Conger, Clark Smith, Andrew Wilson, Will Licon), along with the likes of Chase Kalisz, Kevin Cordes, Conor Dwyer, Cody Miller, Zane Grothe etc.

We’ll also have to keep an eye on the SwimSquad battles, as Team Krayzelburg currently holds the lead after the first stop in Austin. If you’re unfamiliar with the SwimSquads, everything you need, including full rosters and link to all rules can be found here.

Check out the psych sheets here.

Okay when is Missy Franklin going to start competing again

I think shes mentioned in interviews she is trying to return this summer at nationals. I would think she’d probably participate in some local meets with other UGA swimmers prior to making a comeback on a national stage.

Are you sure she’s not retired? It wouldn’t make sense to have not swum a meet so far. Her best chance would be the 800 free relay this summer… but pan pacs only takes top 4 for relays, so not really in her favor.

She’s not retired lol, she is training in Athens now.. she could still throw down a 1:57 and make a relay.

The meet is in Atlanta so why is she not swimming with the Georgia postgrads? She also keeps her fans in the dark which is not good.

She doesn’t have to let her fans know everything about her training.

How getting on the team at 800 relay can possibly benefit her professionally? It will only hurt her image and popularity. Unless she rises to the level of #2 at 200 free event and this relay breaks high-tech suits record and … etc etc etc. Nothing like this will happen. The members of last year team are in good shape and are not going to give up the membership. This place is strongly contested already. And we have a group of youngsters who are not even fifteen yet and who will challenge her fiercely. It is no good for the business she is in. I think that very soon we will learn that recovery after surgery didn’t go as well… Read more »

Not to knock her at all, but her social media shows she’s been doing a lot of traveling, so I’m not sure how much solid training she’s getting in. Looking forward to seeing her compete this summer!

Why is Comerford swimming a LC meet when NCAA’s is so soon after?

If I recall she did so last season as well and threw up a very inspiring 53 in the 1 free as our first glimpse into how she would do the coming summer. I could be remembering incorrectly though.

That seems like more and better international swimmers than usual? Or am I just misremembering.

Seems about on par with what I recall for this time of year Pro Swim series meets, maybe a bit more Canadian representation than usual.

When will Lochte race again??

Quite frankly, I think Lochte is pretty much done. He just hasn’t let Tyr know it yet.

No Hosszu again. Is she going to swim FINA Cup only?

I hear the Texas guys are resting for this and I’m pretty excited to see Conger, Licon and Wilson throw down.

Don’t forget Smith! Should be nice seeing him and Grothe go at in the distance events.