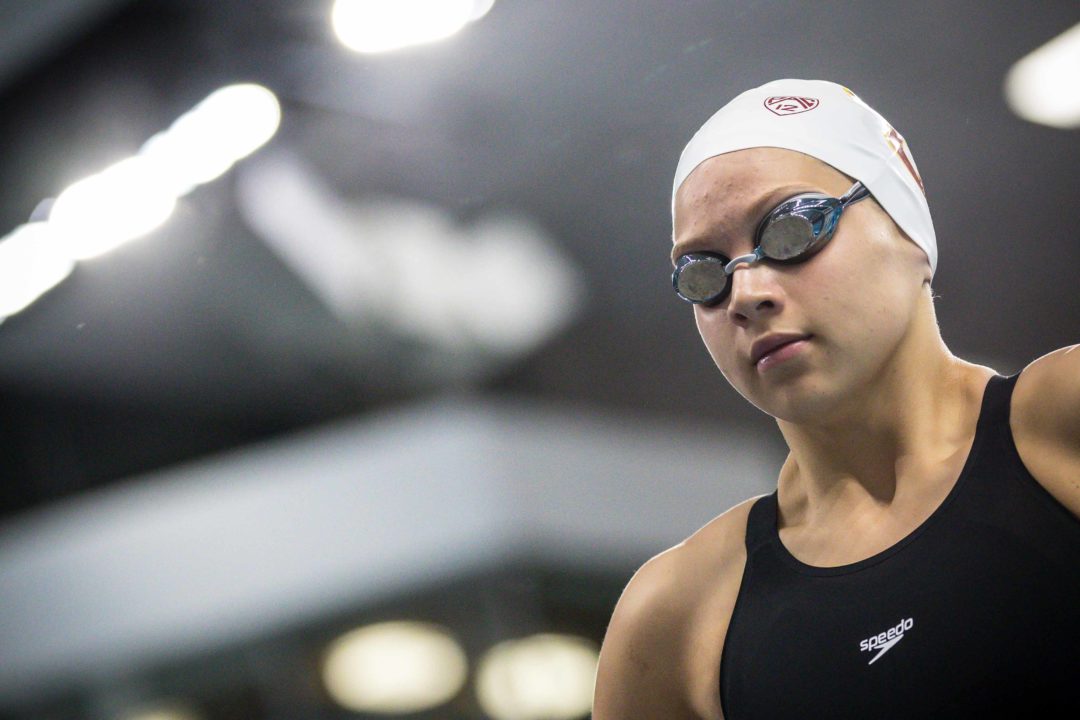 An intraconference transfer, Aria Bernal will swim at USC this season. She was the Wildcats’ top performer in the 100 backstroke in each of her four seasons at Arizona.

At the 2022 Pac-12 Championships, she placed 4th in the 100 back and 6th in the 200 back. That placed her higher than any USC swimmer in either event last season – the Trojans don’t return any A or B finalists in the 200 back.

She will immediately become the favorite to take over the opening leg of USC’s medley relays.

Bringing in a swimmer who scored 55 points at last year’s Pac-12 Championships will be a huge boost for head coach Lea Maurer’s first season as the non-interim head coach for Troy. The backstroke group especially needed depth after Jade Hannah transferred to LSU.

The portal giveth, and the portal taketh away: Laticia Transom will use her 5th year at Hawaii. That brings the New Zealander about 2,500 miles closer to home, and cuts about 7 hours of flight time off.

Hawaii has a long history with athletes from Australia and New Zealand due to the relative geographic proximity to home. The men’s team has another 5th year, John Clark, from New Zealand on the roster, and there are three Australians on this year’s squad as well. Mel Schlanger and Phoebe Hines, both Australians, are among the school’s program record holders.

Transom finished 7th at the 2022 NCAA Championships in the 200 yard free. In 2020, her second season at USC, she ranked 5th in the country in the 200 free and 13th in the 100 free, though that year’s NCAA Championship meet was canceled. In 2019, she joined USC as a freshman spring semester enrolee, and swam the leadoff leg on USC’s 3rd-place 800 free relay.

Transom’s impact on Hawaii will be immediate and immense. She has a shot at three school records, and a near-guarantee in the 200 free: she has 2.3 seconds of breathing room. Her best times in the 50, 100, and 200 freestyles would have all easily won MPSF Conference titles last season, and her relay impact will make Hawaii title contenders in all three races.

Hawaii finished 2nd at last year’s MPSF Championships, 12.5 points behind UC San Diego, to snap a run of five consecutive conference titles. Transom alone could swing that competition as much as 70 or 80 points. The addition is a huge boon for Hawaii in a year where they too have a new coaching staff: former Boston College assistant Mike Stephens is now at the helm.

Transom sat out the 2020-2021 COVID season, so technically this is her 4th season of eligibility, though she did finish her degree at USC and so counts as a grad transfer.

Zona got some gaps to fill

Bernal a nice transfer portal pickup. But my perception is that Trojans still not in a “Net Zero” roster strength position with others like Transom and Hanna transferring out. This will be Lea’s first full year as USC HC after doing interim role last season amidst all the “white water” turmoil in the Trojan Men’s and Women’s program.

To me, it would be a 5th year and a gap year alll wrapped into one! Surf’s up!