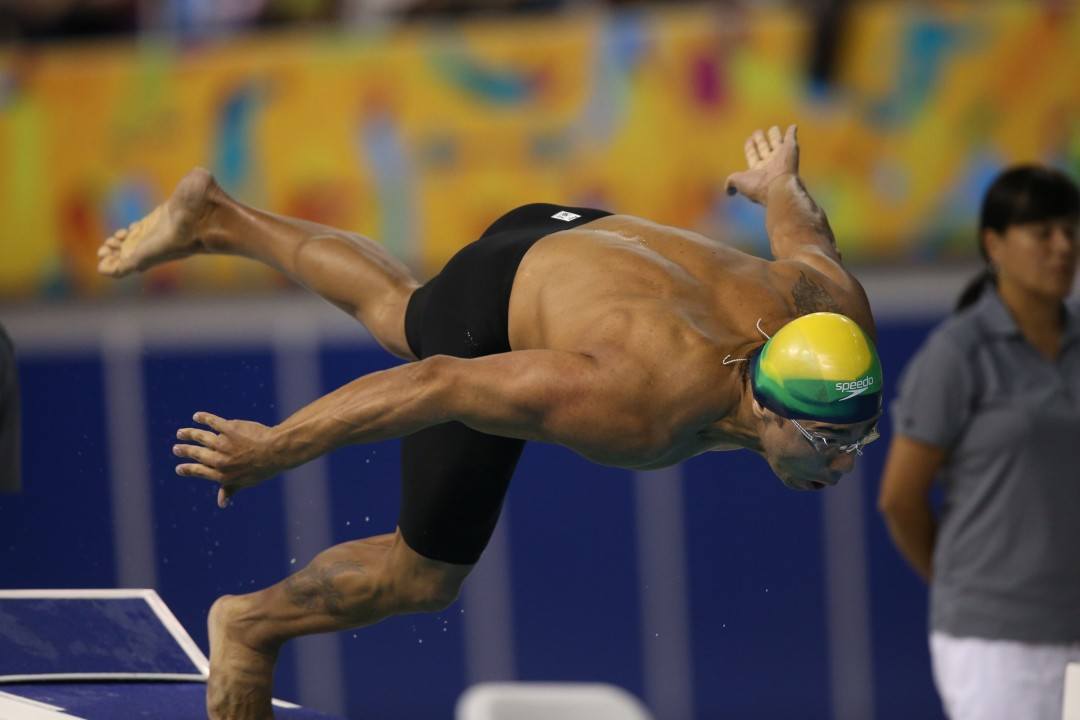 Top placings so far in final one

Bruna Veronez of Brazil led the first final of the women’s 800m freestyle in start-to-finish fashion, claiming the win in 8:40.75.

Behind here were the two Mexican ladies who absolutely brought the heat. Monserrat Ortuna beat one of the top Mexican swimmers, Natalie Jaspeado, in order to sit in second with one final remaining.

Ortuno was a 8:45.81 at the wall after closing out her race fairly strongly. Jaspeado was in third up until the 200 where she dropped into a battle for fourth and fifth. During the last 100, Jaspeado turned on the jets in order to grab a top three finish.

Caitlin Leverenz and Sydney Pickrem had quite the showdown in the women’s 200m IM this morning which might foreshadow what will happen tonight during finals.

Leverenz went out to an early lead, touching first after the fly in 28.45. The backstroke has long been her weakness, and that’s where Pickrem managed to make up plenty of room.

Touching second at the 100 to Pickrem, Leverenz chased her down in order to regain the lead with only 50-meters of freestyle remaining. Pickrem and Leverenz were locked in a battle to the wall, however it was Leverenz who touched first in 2:11.04. Pickrem was second in 2:11.16.

Leverenz and Pickrem are now ranked fifth and sixth in the world this season.

Henrique Rodrigues was the only man this morning to dip under the two-minute barrier in the men’s 200m IM. Rodrigues swam a very tight race, rocking a 1:59.91 at the touch.

With him the whole way as American Ty Stewart out of lane five. Stewart was right with him at the end, putting up the second fastest time of the morning with a swift 2:00.25.

Nobody else was under 2:01, giving American Gunnar Bentz a crack at a medal position as he took the third seed overall in 2:01.26. There were multiple swimmers in that 2:01 range including Canadian Luke Reilly and Brazilian Thiago Pereira.

Pereira looked extremely smooth and relaxed this morning as though he was holding back a lot. He’ll get to race for gold tonight after winning heat three in a time of 2:01.68.

Top placings so far in final one

Rarely do you see any sort of a distance event ending so closely that it comes down to the touch, but that’s exactly what happened in the second final of the men’s 1500m freestyle.

Ricardo of Vargas was on an absolute mission, and ate up an eight second deficit in order to take down Alejandro Gomez of Venezuela.

Vargas swam a time of 15:27.23 to Gomez’s 15:27.30, just barely out-touching him for the second final win. Now, Vargas will be the top seed overall as finals approach.

Although his time doesn’t look to be in contention for a medal, if six swimmers tonight go slower than his time he will end up on the podium.

The United States looked unbeatable after their relay performance this morning. Natalie Coughlin led things off with a 59.20 100m backstroke, the fastest she’s been since the 2011 World Championships.

Katie Meili was a 1:06.50 to extend the Americans lead. Right after, Kelsi Worrell jumped in to put the red white and blue even further in front. Allison Schmitt dove in for the freestyle leg, dropping a 53.95 to absolutely destroy the previous games record.

After Schmitt and Coughlin’s performances, it’s likely that they will keep the same four for the relay tonight.

The Americans look to be an absolute lock for gold tonight, the only question is: how fast can they go?

Unlike the women’s relay, the men’s relay was extremely close and highlighted what could be a potential upset for tonight’s final.

Nick Thoman swam above 55-seconds on his leadoff and the Americans didn’t get the lead they anticipated. On the breaststroke leg, Brad Craig picked things up allowing Eugene Godsoe to build on his lead during the fly.

On the freestyle, Canadian Yuri Kisil chased down Michael Weiss and almost caught him, losing by just one tenth of a second.

Depending on who will be subbed in where tonight, there’s potential for a much closer final than previously anticipated as was evident by this mornings performance.

I doubt it will happen, but it would be great to see Coughlin lead off the medley relay in prelims to see if she could get under 1:00.

Yeah thx Bobo I had just found out the good news elsewhere– She is actually leading off this morning. It’s Coughlin, Meili, Worrell, Schmitt. I’m excited to see what she can do!!

I don’t understand why they already put the A team in prelims.
Coughlin
Meili
Worrell
Schmitt
I’m not sure they will change someone in final.

They might want to do what you always say is the right thing.. Dont save up, Go fast in the morning and leave with a time that beats the USA relay at worlds hahah

bobo – as it turns out, you can only switch 2 relay legs at Pan Ams (to limit the number of medals awarded when prelims heats are merely a formality).

I could have sworn other countries subbed more than two swimmers in previous relays this week??? They just start enforcing this rule today? Weird.

Based on the results, I do not think they will switch anyone.

My guess is they’re doing it to see what Coughlin can do, to decide whether she should do back or free, and compare Schmitty’s free with hers too. As for the other two, they want the middle lanes for finals, but the 2nd breaststroker and flier are both way behind Meili and Worrell.