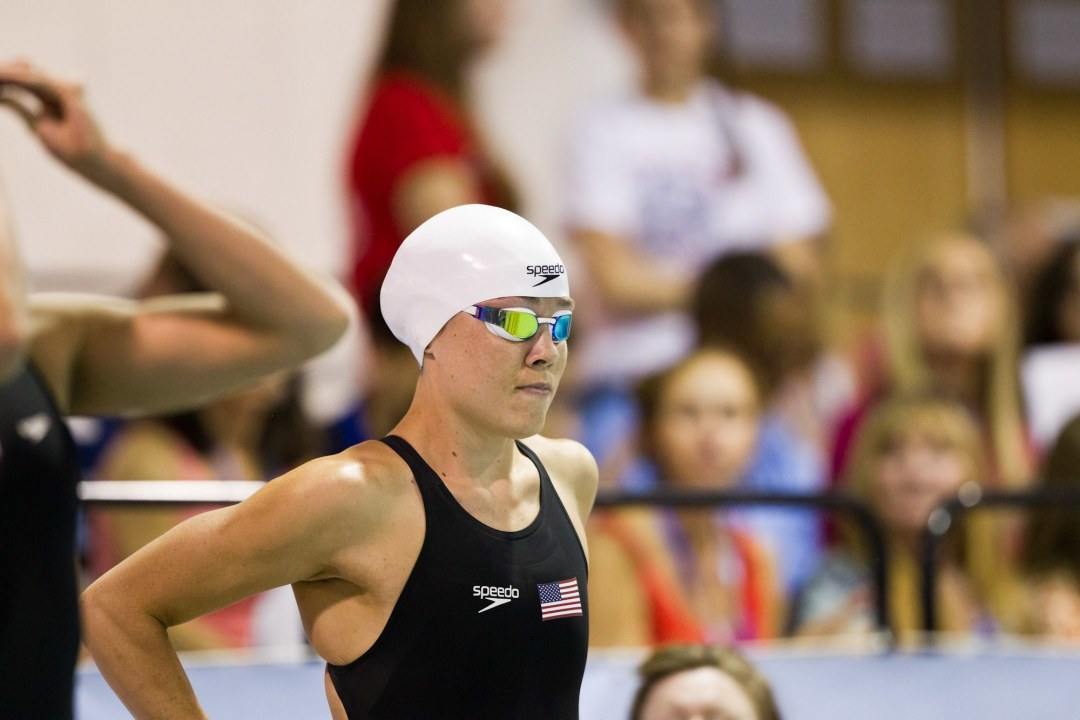 Natalie Coughlin almost earned a lifetime best in the 100 back this morning. Archive photo via Tim Binning/TheSwimPictures.com

Natalie Coughlin lost a tough race in the 100 free, where she was the favorite to take home gold. That was back on the first night of these Pan Am Games, and she didn’t race again until the 50 free prelims yesterday. Without a middle lane in finals, she surprised the field for a bronze medal in 24.66, a lifetime best for the 32-year-old. And now, she’s put together perhaps her most impressive swim of the meet with a fantastic preliminary round 400 medley relay lead-off of 59.20 for the Americans.

Coughlin came up way ahead of the rest of the field and stormed to the turn at 28.49, which ties her 4th best time ever in the 50 back. That time that she tied with was swum at the 2001 World Championships, 14 years ago. Coughlin had a ridiculous 50 back at the Arena Pro Swim Series at Santa Clara (27.51) to upend the American record that surprised even Coughlin herself, and at the turn, it was to be expected that Coughlin would be out first.

What wasn’t quite as predictable was Coughlin’s back half, where she came back in 30.74 for the fastest 2nd 50 in the field, even faster than Dominique Bouchard, who’s known for having great back halves to her backstroke races. Bouchard was just 31.40. Coughlin hit the wall at 59.20, the only swimmer under 1:01 (and 1:00 for that matter) to give the Americans a gargantuan lead just 100 meters into the race.

This swim for Coughlin destroyed Etiene Medeiros‘ new Pan Am Games record from just last night, when the Brazilian smoked the 100 back final with a time of 59.61 to break national and continental records. The time of 59.20 also moves Coughlin up to the #4 time in the world this year.

Many of our readers have speculated that Coughlin should compete more in the 100 back at the international level, rather than sticking to just the sprint freestyle. This is her fastest 100 back since the 2011 World Championships, and it’s only tenths off of her lifetime best of 58.94 from the 2008 Olympics. The U.S. coaches weren’t necessarily expected to put forth Coughlin on the back leg, but with her incredible performance this morning along with a very solid 53.95 anchor from Allison Schmitt, Coughlin’s chances of getting another swim on the backstroke leg of this relay in finals look pretty good.

Agreed. People keep thinking its a given that she will qualify, but she will need a solid performance

Also, every time I think the US is doomed internationally for worlds and the next Olympics, someone like Couglin does this or someone like Katie Meily emerges. I keep forgetting that some swimmers like Ledecky came out of nowhere to save us lol. Those faces might have started emerging a little earlier this time around

Please,Natalie, pretty please race the 100 back at Trials.