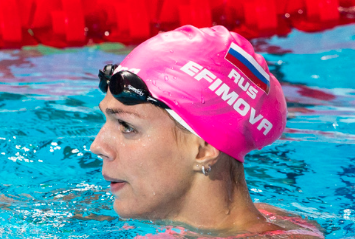 Russian Yuliya Efimova was simply unstoppable across the Mare Nostrum Tour, keeping herself undefeated across all 3 breaststroke distances on all 3 stops. Archive photo via Tim Binning/TheSwimPictures.com

The 2019 Mare Nostrum Tour – Barcelona wrapped up yesterday in Spain and we were treated to some truly special in-season performances by international stars to the tune of Katinka Hosszu, Pernille Blume and Ben Proud.

Narrowing down the races to just our top 5 was a difficult task, but here are the performances that made the grade, in no particular order.

In another ‘first’ stemming from this entire Mare Nostrum Tour, Spaniard Lidon Munoz broke through the 25-second barrier in the women’s 50m freestyle on her way to bronze. She previously held the fastest time ever for Spain in her 25.06 performed last June in Tarragona, but she managed to slice more than a tenth off that outing to a registering a new mark of 24.91.

#2 – Delfina Pignatiello Does it Again

Following up on her already monumental performances throughout this Mare Nostrum, that included a new South American Continental Reocrd in the 800m free, 19-year-old freestyle ace scored big in the 1500m in Barcelona. Clocking a monster 15:51.68, the Airpod-wearing record breaker overtook the previous SA mark held by Chile’s Kristel Kobrich of 15:54.30 since 2013.

Pignatiello’s new time crushed her previous Argentine National Record of 15:59.61 from the 2017 World Junior Championships and now places her 3rd in the world behind America’s Katie Ledeky and China’s Wang Jianjiahe.

The British swimming icon that is Adam Peaty cranked out another impressive 100m breast performance to dominate in Barcelona. Earning a gold medal in 58.15, Peaty annihilated the previous Mare Nostrum Record of 58.78 that he tied in Canet. That time was held by Japan’s national record holder Yasuhiro Koseki.

This is the fastest Peaty has ever been outside of a major international or British National competition. His previous in-season best was 58.61 from last summer’s Sette Colli Trophy.

Russia’s Yuliya Efimova denied all others the gold across every single breaststroke event across the Mare Nostrum. She took the 50m/100m/200m titles at Monaco, Canet and now Barcelona, with her latest feats here including a 2:21.60 200m breast, just .01 off of her own season-best.

At 29 years of age, personal bests are fewer and farther between for Hungarian swimming legend Katinka Hosszu, but the Iron Lady made it happen in the 100m fly in Barcelona. Entering the meet, Hosszu’s career-best rested at the 58.68 from the Hungarian Championships just this past March, but the multi-Olympic champion crushed that to 57.890 en route to topping the podium here.

This was after Hosszu already completed her 400m IM sweep of the Mare Nostrum Tour, producing a season-best 4:32.52 on this final stop to win by over 8 seconds.

I wrote it just for correction.
Otherwise Hungarian NR is Liliana Szilagyi’s 57.54 from 2016.

Yeah, but Yozhik’s been creating the narrative of her steep decline. How could he be wrong?