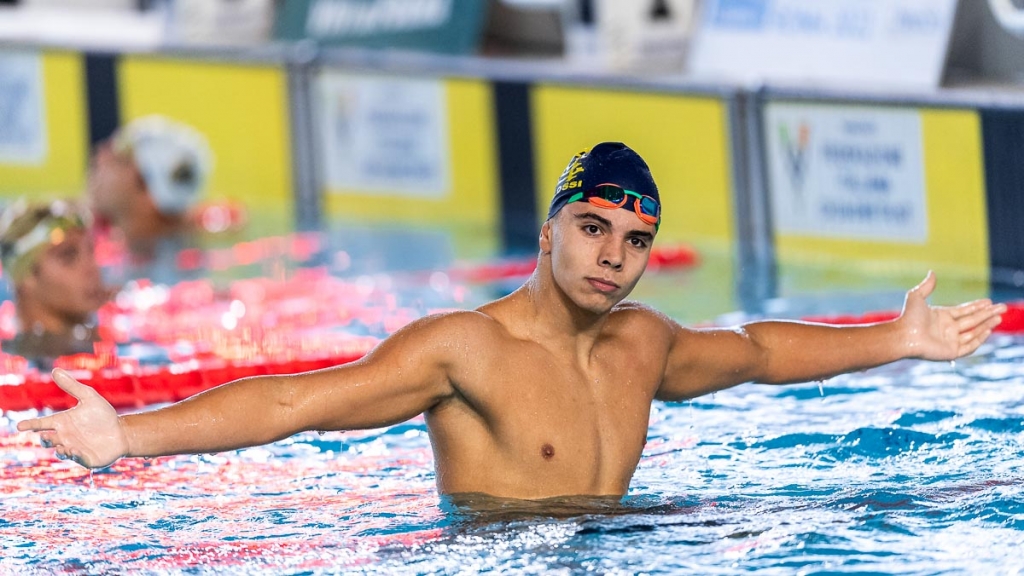 Italy's 16-year-old Lorenzo Galossi is the youngest of our top five men to watch at the 2022 European Junior Championships. Archive photo via Giorgio Scala Deepbluemedia

With the 2022 European Junior Championships kicking off tomorrow, let’s not waste any time taking a look at some of the key boys, 5 to be exact, about to take to the Otopeni Olympic Swimming Complex.

The 17-year-old phenom from the host nation of Romania barely needs an introduction, as David Popovici is coming off an enormously successful senior World Championships.

Popovici took the world titles in the men’s 100m and 200m freestyle, posting final times of 47.58 and 1:43.21, respectively. The latter mark represents the new World Junior Record, while the talented teen’s semi-final time of 47.13 in the 100m established a new WJR in that event.

Although Popovici is also the top seed in the 50m free here in a time of 22.22, his significant advantage lies in the longer sprints, where he sits nearly one second ahead of the next-fastest 100m freestyle seed and just about 5 seconds faster than the 2nd seed in the 200m freestyle.

Time will tell if Popovici maintained his taper from Budapest to perhaps throw down performances even more eye-popping from what we saw the Romanian produce when not in front of his home crowd.

Although sitting a distant second seed behind Popovici in the sprint freestyle events, Great Britain’s Jacob Whittle has been making some noise of his own at just 17 years of age himself.

The former Derventio Excel swimmer was his nation’s youngest swimmer on the roster at last year’s Olympic Games and also raced at the senior World Championships both individually and on relays.

Lorenzo Galossi of Italy is the youngest among the top 5, with the freestyle ace having just turned 16 as of May 25th. But he’s already built a strong resume in mid-distance freestyle of which he’ll be taking on the 200m, 400m and 800m events here in Bucharest.

Before even arriving here, however, Galossi made national history in the short course pool, putting up head-turning times as a 15-year-old.

This past April, for instance, the freestyle ace clocked a big-time 3:45.93 in the 400m free at this spring’s Italian Long Course Championships. His time established a new European Junior Record and also got Galossi to the wall ahead of Italian big guns Gabriele Detti and Marco De Tullio who were also in that race.

Galossi is the top-seeded swimmer by a significant margin in the 400m and 800m free for these Euro Juniors, while he sits only behind the aforementioned Popovici and Whittle in the 200m with a seeded time of 1:48.26.

The nation of Poland carries a rich backstroke history thanks to the likes of multiple World Championships medalists Radoslaw Kawecki. Now it’s Ksawery Masiuk who continues the tradition, taking the 100m and 200m Euro Juniors titles last year before making his mark this year in Budapest as just a 17-year-old.

Masiuk was SwimSwam’s honorable mention for Junior Male of the World Championships, an award given to Popovici. For Masiuk’s part, however, he was the only other junior male to get on an individual podium in Budapest.

The teen raced the 50m back on the final day of competition, firing off a time of 24.49 to snag World Championships bronze. That was after he established a new national record in the earlier round with a time there of 24.48.

Masiuk was also a medal candidate in the 100m back in Budapest where in the semi-finals he came within .05 of Russian Olympic medalist Kliment Kolesnikov’s 52.53 World Junior Record in the event. The Pole ultimately finished 6th with a time of 52.75 to put the world on notice he is an emerging talent in the backstroke discipline.

For these Euros, look for Masiuk in the 50m, 100m and 200m back where he is the dominant top seed in all but the latter.

The second Polish swimmer to make our list is Krysztof Chmielewski, the eldest of the bunch at 18 years of age. Chmielewski is also the swimmer who is taking on the most individual events, entering in the 200m fly, in which he’ll try to defend his 2021 Euro Jrs title, the 400m free, 800m free and 1500m free.

Chmielewski’s strongest event is indeed the 200m fly, where his entry time of 1:55.01 checks him in about a second and a half faster than the next swimmer. The 2nd seed happens to be Chmielewski’s twin brother, Michal, who owns a seed time of 1:56.66 and was the silver medalist at this meet last year.

As for Krysztof Chmielewski, he fell just .10 shy of making the 2fly final at this year’s World Championships. As a consolation, he became the #3 Polish performer in history in the event and within striking distance of the supersuited Polish national record.

Does anyone know why the live stream doesn’t work? 🤔

Laughing at imagining a 15 year old going 3:45 at US trials

Ian Thorpe did that in 1998 wearing briefs

Did the Polish kid have to give his medal back or was it Ceccon that won the original bronze?

It was ceccon that won bronze before the dq was overturned

Goodness these Jr swimmers are fast

Popovici swimming in clear water, without beefy guys like Grousset and Liendo making waves by his side could lead him to an even faster 100 free than what he swam in semis