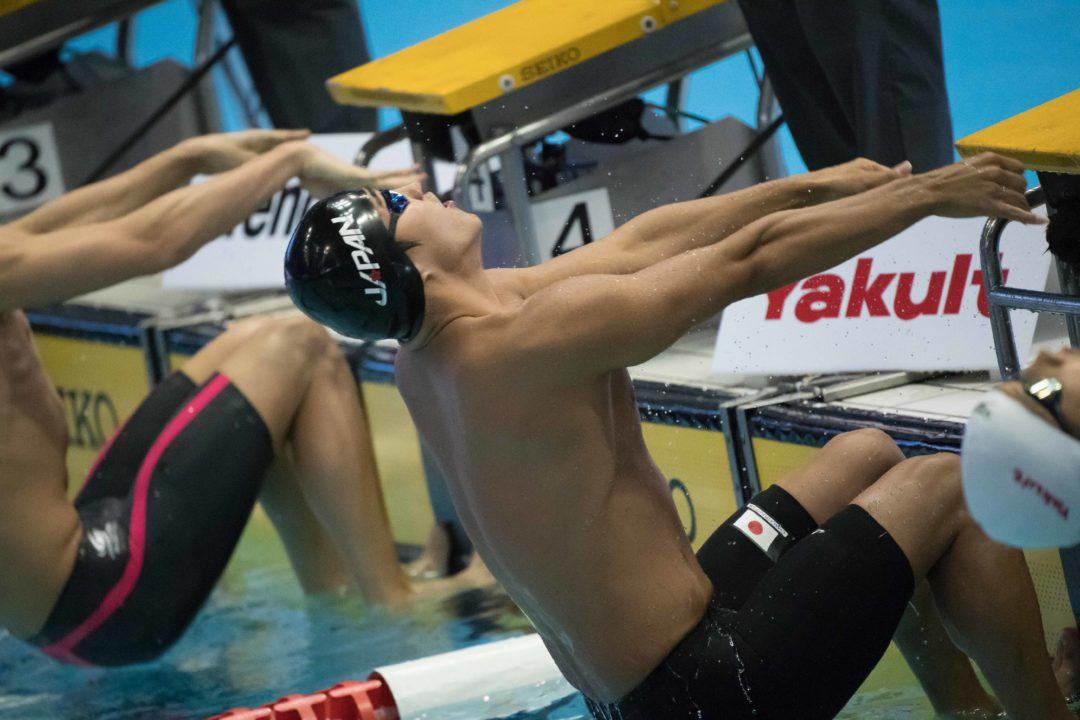 A highlight of the inaugural Tokyo Special Swimming Tournament was the return of multi-national record holder and 2018 Asian Games MVP Rikako Ikee.

20-year-old Ikee dove in for the first time in 594 days after having battled leukemia, which put her in the hospital for nearly the entirety of 2019.

Ikee’s 26.32 50m freestyle tonight was a milestone in the stellar swimmer’s career, one which includes making an Olympic final in Rio, as well as winning 100m fly Pan Pacs gold in 2018. You can read more about Ikee’s racing return tonight here.

As for the remainder of the meet, the Japanese contingency brought the heat, with both men and women taking advantage of their first racing opportunity in several months.

20-year-old Rio Shirai made her presence known here on day 1, taking the women’s 200m free in a tight battle with mainstay racer Chihiro Igarashi. Shirai wound up getting to the wall first in a time of 1:58.35, while Igarashi settled for silver in 1:58.57.

Shirai already ranks as the #2 performer all-time in this women’s 200m free event in Japan, owning a lifetime best of 1:56.82 from last year’s FINA World Aquatic Championships. That was good enough from the semi-final to slot Shirai into the top 8, where the on-the-rise athlete finished 7th with a final time of 1:57.14.

The reigning Olympic champion in the men’s 400m IM, Kosuke Hagino, topped the men’s edition off the 200m free tonight, albeit by a fingernail. The rejuvenated 26-year-old Hagino touched in 1:48.95 to hold merely a .02 advantage over the runner-up Fuyu Yoshida.

Winning the women’s 400m IM by over 12 seconds was Miki House swimmer Sakiko Shimizu. Shimizu touched in a time of 4:41.24 to easily clear the field. Although that result is well-off her personal best of 4:34.66 from Rio, it was enough to handily take the victory here.

Making his return to racing after nearly a 2 1/2 year absence was Junya Koga, trying his 50m back specialty even on for size this evening. This represents Koga’s first official dive back into the water after having served a suspension for a doping violation, one that would have rendered him out of the Tokyo Olympic Games had they proceeded as planned for this year.

Koga clocked a 50m back time here of 25.04, good enough for gold, while he said post-race that he felt rocky.

“Not bad, but not good,” is how Koga described his effort. “There are many problems, such as uncertain head position, my tempo and my inability to swim straight.

“But, there is joy in being able to come back to racing.”

The women’s 100m fly here at Tatsumi International Swim Centre saw 3 competitors dip under the 1:00 barrier, led by 2019 World Championships semi-finalist Suzuka Hasegawa. The 20-year-old punched a massive lifetime best of 57.49 to get under 58 for the first time in her career and become Japan’s 2nd fastest performer all-time.

You can read more about Hasegawa’s impressive swim here.

Runa Imai was within striking distance of her own lifetime best en route to winning 50m free gold tonight. Stopping the clock in 25.22, Imai fell just .22 of her own PB of 25.00 produced last year.

Rika Omoto and Mayuka Yamamoto rounded out the top 3, with the former clinching silver in 25.58 and the latter bronze in 25.89.

The men’s 50m free saw Masahiro Kawane get on top with a time of 22.31, while national record holder Shinri Shioura was next with 22.39 for silver.

The following events are slated to be contested on day of this meet: