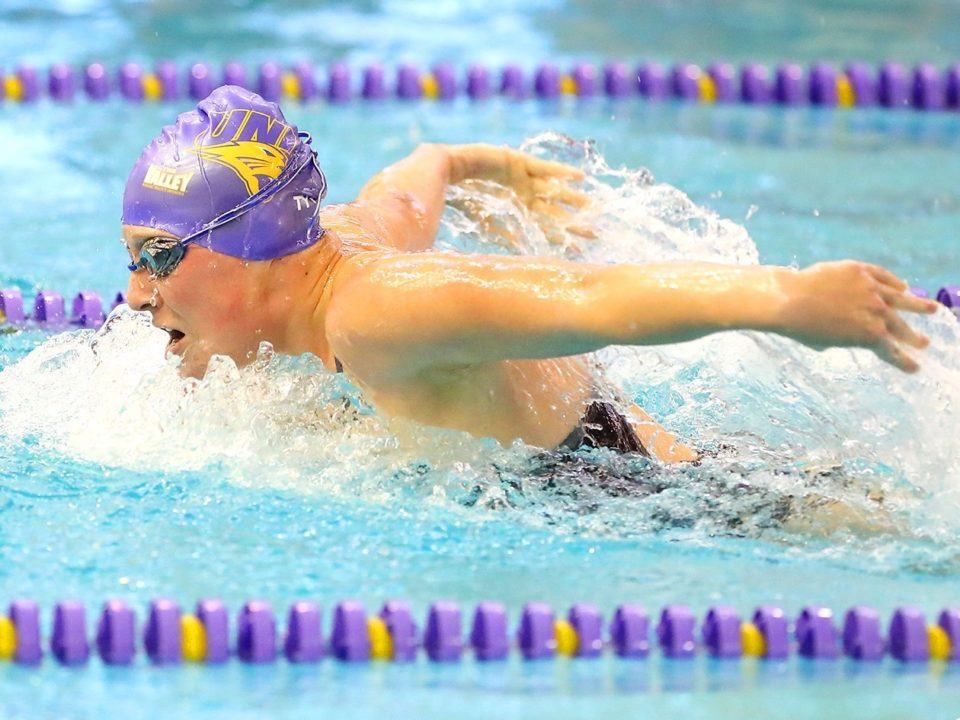 Swimming is most exciting during a close race with something on the line. It’s is a sport about racing. Beating... Current photo via Northern Iowa Athletics

Rhode Island won the last 2 events to turn an 11 point deficit after the 1 meter into a 3 point win. There was a lot of great racing down the stretch in this meet. Rhode Island sophomore Kelly Blake won the 100 fly by .04 and on the 3rd leg of the decisive 200 free relay she dove in .35 behind and finished with a .33 lead. In the 200 IM Rhode Island’s Nicole Petta steamrolled La Salle’s Collin Kessinger on the final 50, turning Kessinger’s .68 lead after the breast into a .71 victory with a 30.12 final split.

The first day of consecutive duals between these teams ended in a tie. The race that best epitomizes this meet was the 200 fly which also ended in a tie between Grand Canyon’s Daniil Antipov and Air Force’s Peter Lochmaier (1:52.36). The largest lead Air Force held was 9 points. Grand Canyon’s largest lead was 16. GCU swept the relays and Air Force won 7 of 11 individual events. Air Force got 2 wins from Adam Grimm (1000, 500) and Lochmaier (200 fly, 200 free). Grand Canyon got 2 from Mark Nikolaev (200 back, 200 IM).

The night before the Oakland men lost their first ever Horizon League dual meet, they nearly lost a Horizon League dual meet to Illinois Chicago. Oakland led by 15 heading into the final relay, making the UIC’s win there window dressing, but one more event win would have done it for Chicago. Oakland swimmer Paul Huch‘s .07 win in the 50 was perhaps the key to the meet win. UIC’s upset bid was led by Luke Hutchinson’s event wins in the 1000 free and 200 fly.

Northeastern led for much of this meet including by 20 after the 50 free and by 13 after the 500 free with only 3 events to go. Columbia took 1-2 in the next two events to take a narrow lead into the final relay. 400 IM winner Jessica Antiles said after the meet “My coaches came up to Mary (Pruden), Madison (Leblanc) and I and told us that we needed to go 1-2 in order to win the meet.” With a 12 point final margin, that wasn’t ultimately necessary, but the Lions pulled it off anyway.  “I said to Mary beforehand, ‘We’ve been training so hard. We can do it. I have a tremendous amount of confidence.’ So, I just gave it absolutely everything I had and we came out with the win.”

Perhaps the Columbia coaches were concerned about their ability to win the final relay, which they ultimately won by only .18, after seeing Northeastern’s Megan Clark come from a half a second behind in the final 50 of the medley relay to win the relay by .95.

Iona had to work hard to hold off Providence’s 18-0 advantage in diving. Providence were ahead 123.5-120.5 after the 3 meter with only the 200 IM and 200 free relay to go. A narrow .2 win by Jackson Madonia in the 200 IM and a dominating win in the relay sealed it for Iona. Providence’s only other lead came after Justin Viotto’s win in the 500 free. Viotto also won the 1000 and 200 fly. Iona were led by Matthew Bosse‘s sweep of the backstroke events.

This meet was part of a double dual with Michigan contested over two days. More on that here. Denver trailed Iowa by 10 after the first day and trailed by 8 with 2 events to go. They scored a 1-3-4 finish against Iowa in the 400 IM to take a narrow 1 point lead into the final relay. There, a .3 margin over Iowa secured their victory over the Big 10 team.

Entering the last event with a 7 point lead, UCLA needed either a win or a 2-3 finish to secure the meet. They took the easy route, winning the relay by 3 seconds. UCLA led through most of the meet, but a 1-3-4 finish for Arizona in the 400 IM made things interesting at the end. UCLA out scored Arizona 29-9 in the backstrokes.

This one was decided before the final relay which was won by UNLV to provide the tight final margin. BYU enjoyed a 32-6 advantage in diving points. That was enough to overcome UNLV’s wins in 8 of the 14 swimming events. BYU were led by a backstroke sweep by Brynn Sproul and a breast sweep by Mariah Lindsay.

NAU led after all but 2 events in this meet, but that paints a false picture of how close this was. The lead was greater than 10 points after only 4 events and entering the final event, NAU led by only 3. Idaho won 4 of the final 5 individual events to make it that close, but NAU won the final relay by .66 to close it out. This was part of a double dual with Seattle, but these were the best two teams (no swimmer from Seattle was in the top 5 in any event).

Northern Arizona’s win over Idaho came as part of a 2 day swing through the Palouse. The day before they fell by a close margin to Washington State. Washington St needed their dominating 2 second win in the final relay to secure the meet, but the more exciting relay was the meet opening 200 medley relay. That event saw Chloe Larson split a 23.94 to over come a .3 deficit and win the relay by .03. Washington St. got 3 crucial event wins from Taylor McCoy (100 back, 200 back, 200 IM)

After tying Cleveland State last weekend, Xavier was a inch away from tying Bowling Green this weekend. Trailing by 13 entering the final relay, Xavier needed a 1-2 finish to tie Bowling Green. They slid star sprinter Emily Conners, winner of the 50 and 100 free at this meet, onto the B relay in an attempt to do just that. Their A relay took 1st, but the B relay was 2nd by .09 after Ashleigh Franks of Bowling Green split a 23.99 to make up a half second deficit on the final 50.

Arkansas’s sweep of the all 4 relays and both boards keyed their narrow win. We did a full recap of this meet. View it here.

We did a full recap of this meet, a double dual with Tennessee. One thing I’ll add: the margin could have been only a couple of points if Wisconsin hadn’t DQ’d their medley relay. Purdue’s 15 point margin also was nearly much larger as Wisconsin’s 400 free relay was listed as a DQ on the initial results before it was changed in the final results. Beata Nelson is still listed with a reaction time of -.09. Wisconsin coach Yuri Suguiyama said after the meet “Today was a great learning experience for our program. We walked away with a lot to improve upon.”

This was part of a double dual with Pitt. We recapped the whole meet here.

We did a full recap of this meet.

The UCLA meet was against Arizona State!