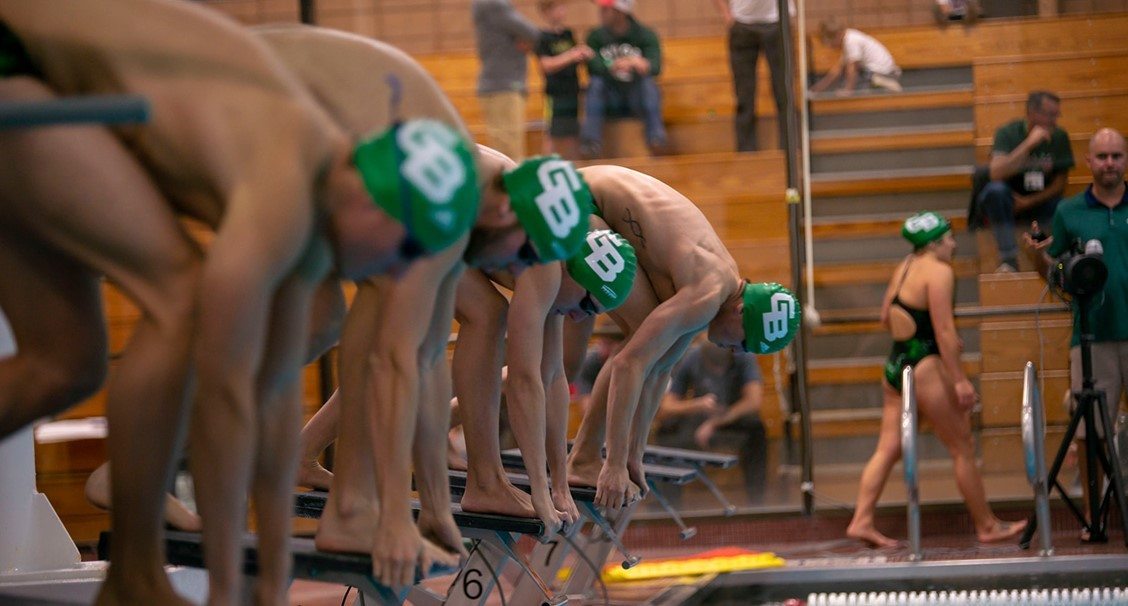 The Green Bay men toppled Oakland 164.5 to 135.5, marking the first time the Oakland men's team has been beat in a Horizon League dual meet since joining the conference in 2013. Current photo via Green Bay Athletics

GREEN BAY, Wis. – The Green Bay swimming and diving teams hosted the Oakland Grizzlies this afternoon in the first of three Horizon League dual meets of the 2018-19 season. The men took home the victory, toppling the Grizzlies by 29 points, 164.5 to 135.5. This marks the first time that the Oakland men’s team has been beat in a Horizon League dual meet since joining the conference in 2013.

The highlight of the meet may have been the final event: The Green Bay men’s 400 free relay broke the pool record by twelve hundredths of a second, posting a quick 3:04.87 to beat the Grizzlies by over three seconds. The new owners of the Green Bay pool record are now sophomore Reagan Ragsdale, sophomore Ari Kissel, junior Garrett Spencer, and sophomore Ben Redman.

Sophomore Anna Liu also earned herself a pool record after winning the 100 freestyle in 51.39, breaking the previous record of 51.52. In the process, she also reclaimed the top spot in the Horizon League in the event so far this season.

“It was an exciting meet,” said head coach Reed Robelot. “Hats off to our men for getting the win, and our women did an excellent job of keeping their focus on one event at a time.”

He also commended the visiting Grizzlies. “We have to give Oakland a lot of credit for the way they performed, especially coming off of a meet yesterday. Make no mistake, Coach Pete will have that squad ready when we see them at the Horizon League Championships. Until then, our coaching staff is extremely happy with the mental game that our team is bringing to the fall season.”

Robelot finally offered some key points of improvement that the Phoenix will still need to focus on. “With that being said, some of our younger players need to work on their opening speed for their 200s and 400s. Staying strong in the middle of a race takes experience. We’ll need to solve that if we want to be at our best in a few weeks.”

Not only did the meet close with a major triumph for the men in the 400 free relay, but the women’s team also saw a satisfying win in their last event. The squad of sophomore Anna Liu, senior Alicia Hanson, freshman Gabrielle Marlatt, and senior Rosalyn Stoa teamed up to stop the clock at 3:30.58, over a second faster than the top Oakland relay.

The dual opened with tight races, setting the tone for the rest of the afternoon. The 400 medley relay was won by the Phoenix men by just three one-hundredths, with the squad of Ragsdale, freshman Conner Funke, junior Riley Darling, and Redman turning in a final time of 3:24.41. On the women’s side, the Lady ‘Nix were just a second off the winning Grizzlies, with the A relay of freshman Helena Heuberger, junior Clare Martell, Liu, and Marlatt opening up the meet with a time of 3:53.59.

The men’s 1000 freestyle was as exciting as the long event could get this afternoon, with freshman Xabier Carneiro leading the way for most of the event until the last 100. The younger brother of junior Ricky Davis, Oakland swimmer Ben Davis, barely out-touched the Spaniard by just .03. Still, it was a best time for Carneiro, and the time of 9:35.18 moved him up two spots in Green Bay’s Top-Ten Times list (PDF) to stand sixth overall. Behind the freshman, the Phoenix also took places 3, 4, and 5, with classmate Daniel Frederick, senior Manny Hernandez, and junior Jack VanZee each swimming well under the 10-minute mark to post season-best times. The women’s distance race saw sophomore Logan Johnsen, fairly new to the event, place third with a new best time of 10:54.11 to lead the Phoenix.

The men won their first individual event with the 200 freestyle, as Kissel came from behind in the last 50 to overtake an opponent and finish first in 1:42.11. The women nearly saw their first gold of the meet as Stoa employed a similar strategy, but the senior could have used a bit more pool length, finishing at 1:55.53, three tenths behind the winner.

The visiting Grizzlies fought back in the 100 backstroke. Senior Charlie Warren led the men with a time of 52.24 to place third, and Heuberger was the top female finisher with a second-place finishing swim of 57.49. The Grizzlies turned the tide again later in the 200 backstroke, taking the top two spots on both sides. Again, Warren took third for the men with a time of 1:53.41, while Heuberger also received bronze in 2:11.51.

However, the men’s 100 breaststroke was redeeming for Green Bay as they swept Oakland. Sophomore Max Boehnlein touched the wall first in 57.23, followed by Funke in 58.05 and Spencer in 58.79, all season-best times. The women’s breaststrokers were led by Martell, posting a time of 1:08.32 to sneak into second place by one one-hundredth of a second.

Darling continued to shine in his signature event, the men’s 200 butterfly, grabbing a season-best 1:51.67. Senior Annika Engstrom also posted a season-best time to lead the Lady ‘Nix, placing second in 2:11.22.

Redman continue to keep Oakland from stealing a top spot in an event in the men’s 50 freestyle, out-swimming the entire heat in 21.03. Later, he returned in the 100 freestyle to collect a sweep of the sprint free events, taking the victory in 45.86. On the women’s side, the sprinters came through for the Phoenix, with Hanson and Marlatt going 1-2 and junior Claire Stuart placing fourth to collect some crucial team points as well. Hanson paved the way in 24.25 while Marlatt’s debut individual swim was 24.46.

The 200 breaststroke gave Green Bay yet another boost of energy on both sides of the roster. Funke cruised to victory in 2:05.96 for the men, followed by Boehnlein in 2:08.20. For the women, Martell earned gold with a gutsy 2:26.32 finish, approximately six tenths ahead of a second-place Oakland opponent.

Green Bay continued to fight in the 500s, taking first place on both sides. Stoa crushed the competition with a season-best time of 5:11.14. Fellow senior Hernandez swam a smart race on the men’s side, touching the wall at 4:40.18.

Liu was back again for the women to take first place in the 100 butterfly with a lifetime best time of 56.58, snatching the top spot in the Horizon League in this event as well. Hanson nabbed the second-place spot with a solid 57.65. While the Oakland men took the top spot for the men’s race, the Phoenix went 2-3-4: Kissel in 51.15, Darling in 51.42, and senior Eli Broman in 51.68.

The IMs were the last individual swimming events of the meet. The women raced a 200 while the men competed in a 400. Stoa took home a second victory with a final time of 2:10.48, while Boehnlein was the top finisher for the men with a time of 4:12.64, good for third.

The divers were up against steep competition today, but they stepped up to the challenge. Junior Maddy Corbin took third out of six on the 1-meter board with 225.97 points, her highest finish of the day. Junior Josh Yahr and freshman Miles Rohrbaugh each had strong performances on the lower board as well, with the elder of the two scoring 247.72 points for second place and the younger collecting 242.32 points for third, each grabbing critical team points. Junior Derrick Prenot was the top finisher for the male divers on the 3-meter board, placing third with 286.50 points.

The Phoenix swimming and diving teams will now have the next two weeks to prep for their annual mid-season invitational in Indianapolis: the IUPUI House of Champions Invite. The meet will take place from Friday, November 16 until Sunday, November 18.

The Golden Grizzlies earned a combined 16 first place finishes between the men and women, including the diving competition.

The Oakland women’s team returns to the pool Saturday, Nov. 10 at 1 p.m. for a home meet against Eastern Michigan.

Both the men and the women will travel to Akron, Ohio to compete at the Zippy Invite Nov. 30 through Dec. 2.

When the men’s side starts off with the first two being decided by three-hundredths of a second, you know it had to be a fun meet to be apart of.