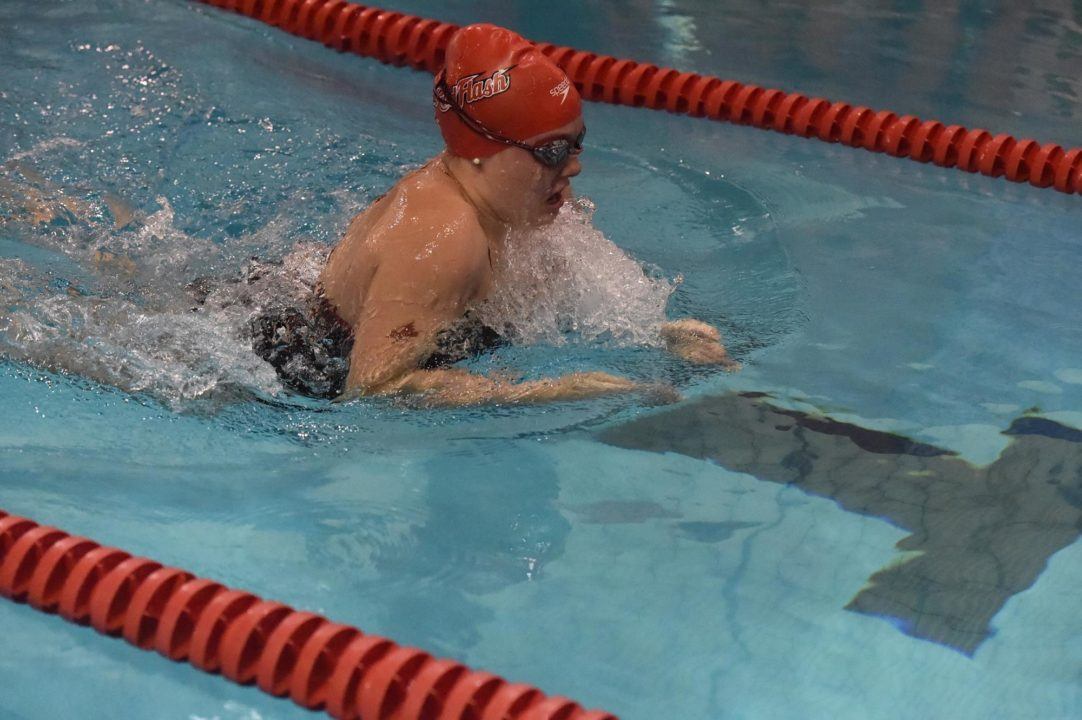 Led by Sabrina Bowman, the Saint Francis Red Flash swim team won a NEC meet against the Blackbirds of LIU Brooklyn by the score of 170-92. Current photo via Saint Francis Athletics

FIU was dominant as they defeated in-state rival FGCU on Saturday, winning all but 2 swimming events. FGCU celebrated senior day.

Loretto, Pa.- Led by Sabrina Bowman (Vandergrift, Pa./Saint Joseph’s), your Saint Francis Red Flash swim team won a NEC meet against the Blackbirds of LIU Brooklyn by the score of 170-92.

Almoney’s Angle
“When I look at the meet overall, this is what Saint Francis swimming is all about. High energy, cheering, family support, when we can do that, good things happen. We played against a competitive program and one of the best coaches. We showed lots of growth. We just went out there and raced. We are looking forward to California University.”

In the 200 Freestyle, Karilyn Quon (Tempe, Ariz./Corona del Sol) registered her fifth individual victory of the season with a time of 1:57.63.

Mackenzie Lawson (Charlottesville, Va./The Covenant School) added another victory in the Red Flash tiller by taking first in the 100 Breaststroke (1:08.12).

Birthday girl Sabrina Bowman (Vandergrift, Pa./Saint Joseph’s) put the icing on the cake by winning the 100 Freestyle with a time of 52.36.

Amelia Laudenbach (Kambah, Australia/Trinity Christian School) won her second collegiate event by touching the wall in 5:21.32 in the 500 Freestyle.

Bowman celebrated her birthday again in grand fashion by winning the 100 Butterfly in 57.03 seconds.

Karilyn Quon (Tempe, Ariz./Corona del Sol) won her third victory of the meet in the 200 IM by swiftly swimming to the time of 2:11.46.

The Red Flash closed the meet like how they opened it with a relay win. The foursome of Sabrina Bowman (Vandergrift, Pa./Saint Joseph’s), Katelyn O’Connor (Torrance, Calif./South High), Annabelle McCullough (Mercersburg, PA./James Buchanan High School) and Karilyn Quon (Tempe, Ariz./Corona del Sol) won the 200 Freestyle Relay in a time of 1:38.11.

Up Next
The Red Flash remain at Stokes for a state showdown with California University of Pennsylvania.

LORETTO, PA. —  The LIU Brooklyn women’s swimming team lost for the first time this season, 170-92 in a dual meet at Northeast Conference rival Saint Francis U. on Saturday in Loretto, Pa. The Blackbirds (7-1) won three events in the meet, which includes two by freshman standout Amanda San Juan.

A two-time Northeast Conference Rookie of the Week, LIU freshman Amanda San Juan broke her own school record in the 1000 freestyle (10:49.10) to win the long distance race by four seconds. Later in the meet, San Juan won the 200 butterfly for the first time this season in 2:13 flat, taking that event by 1.2 seconds. San Juan also had a third place showing in the 100 butterfly (1:00.61).

In relays, LIU was topped in the 400 medley relay and the 200 freestyle which bookend the meet. A new foursome of Meyers, Touchette-McGowan, Grabowski and Amon swam the medley in 4:03.95, while San Juan, Meyers, Amon and Vega went a season-best 1:38.56, just 0.45 behind the Red Flash in the event.

The Blackbirds will have back-to-back meets next weekend beginning with a trip up to Army West Point on Friday, Nov. 9 at 5 p.m. LIU will then return to the Steinberg Wellness Center for the last home meet of the calendar year, as Lafayette comes to the LIU Pool for a 2 p.m. contest on Saturday, November 10.