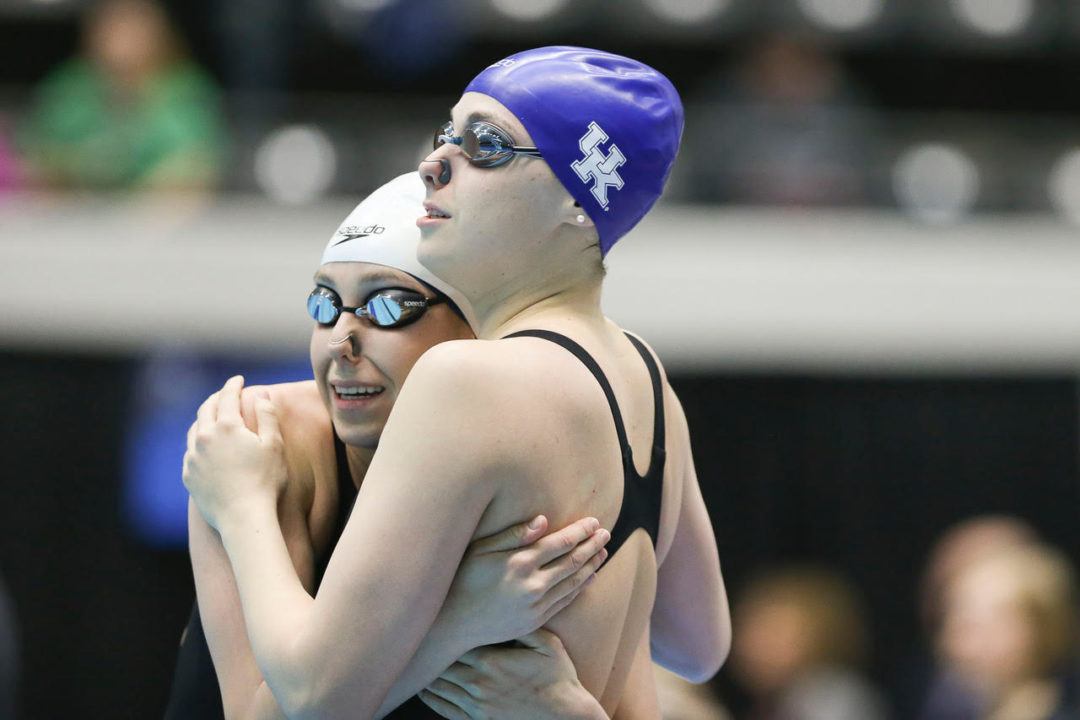 MIZZOU VS ARKANSAS VS KENTUCKY

On day 2 of the SEC tri-meet featuring Mizzou, Arkansas, and Kentucky, the Wildcats swept the women’s meet, and beat Mizzou in the men’s meet. Arkansas also topped Mizzou by 1 point in the women’s meet.

COLUMBIA, Mo. – Taking full advantage of its two-day meet on the road, the Kentucky swimming and diving program accounted for each win possible on the tri-meet ballot in Columbia, Missouri, leaving the men and women with three-meet winning streaks ahead of an all-important Ohio State Invitational.

The No. 18 Kentucky women recorded two satisfying wins over Missouri (210-143) and No. 23 Arkansas (206-147), while the men posted a last-race victory that sealed the deal over No. 22 Missouri (184-167). Both squads led after the first day, generating enough momentum to finish victoriously on Friday.

“It was a great day for the Wildcats,” said head coach Lars Jorgensen. “It was a really exciting men’s meet, coming down to the very last relay. It was a team effort across the board. Peter Wetzlar was awesome, also Jarod Kehl winning the 1,000 freestyle. We won the medley relay in the beginning too, which kept the momentum going throughout the day. Again, a lot of people came out today. The 400 IM swimmers were fantastic. Daniel Orcutt and Connor Blandford were 1-2 in that, and that made a difference giving us a little cushion on the last relay.

“On the women’s side, we were pretty solid today as well – about the same as yesterday. We swam against two really good Arkansas and Missouri teams, who had great meets as well. Asia had a great day today. Riley Gaines picked up a really nice victory in the 200 freestyle, which I thought was a really good contribution. Bailey Bonnett swam fantastic in the 400 IM and 100 breaststroke. So, they came to play. They raced really well.”

The two-day meet, 38-event format, was contested in the Mizzou Aquatic Center Nov. 1-2. It marked the third meet on the Kentucky schedule.

A host of gold finishes were had by Wildcats in the two-day stretch. The UK women and men saw 11 winning finishes each, of 19 events per squad.  The UK women posted 10 individual victories and one relay victory. The men saw nine individual wins, with two relay wins recorded in the 200-yard medley relay and the 400-yard freestyle relay, which finalized the meet.

Junior Asia Seidt put together the most individual wins in the tri meet, with four defeats – 200-yard backstroke, 200-yard individual medley, 200-yard butterfly, and 100-yard backstroke. The Kentucky native’s time in the 200-yard butterfly (1:58.99) will allow her to move into the ninth spot in the discipline, in Kentucky’s record book. She shed .29 milliseconds off her previously recorded time, which filed a No. 10 ranking.

“In two more weeks we have a much bigger meet in front of us at Ohio State,” Jorgensen said. “It was great to win three meets today, couldn’t be more excited.”

The Kentucky swimming and diving program will head north Nov. 15-17 for the annual Ohio State Invitational, an event Kentucky looks forward to each year for its competitive atmosphere and record-breaking results by Wildcats.

COLUMBIA, Mo.- The No. 23 Arkansas swimming and diving team split competition at the Missouri tri-meet, defeating Missouri 177-176 and falling to No. 18 Kentucky 206-147. Junior Anna Hopkin set her second record in as many days, her third record-breaking performance of the year.

Arkansas started the day off strong, once again winning the opening relay. Andrea Sansores, Sydney Angell, Kobie Melton, and Hopkin set a season-best time in the 200 yard medley relay (1:40.97) victory. The Razorbacks won the other relay event of the day, with Melton, Kiera Michailoff-Russell, Hopkin, and Marlena Pigliacampi setting a season-best time in the 400 yard freestyle relay (3:19.64).

Sophomore Brooke Schultz won the 1m springboard with a score of 306.15 to sweep both diving events.

“I am excited how this team fought back today,” head coach Neil Harper said. “We knew Kentucky and Missouri would provide a great challenge for our young team on the road and we came together for many key performances throughout the team. Brooke, Anna, Sydney, Peyton, and Marlena all provided great leadership and our freshmen are collectively becoming a huge factor in our success going forward.”

Arkansas will return to the pool after a week off, traveling to Austin, Texas for the Texas Diving Invite and back to Columbia, Mo. for the Missouri Invite.

COLUMBIA, Mo. – The Mizzou men’s and women’s swimming and diving teams completed competition in a two-day meet against Kentucky and Arkansas (women only) on Friday morning at the Mizzou Aquatic Center.

The outcome came down to the final races of the day, with the Arkansas women squeaking past the Mizzou women, 177-176. The Wildcat men defeated the Tiger men, 184-167, and the Kentucky women notched a 210-143 win over the Mizzou women.

A total of five Tigers took home wins during day two action on Friday. In the diving well, senior Kyle Goodwin (Aurora, Colo.). completed a sweep of the springboards as he took first on 3-meter with 346.35 points. The senior also won 1-meter during Thursday competition.

Senior Annie Ochitwa (Highlands Ranch, Colo.) took top honors in the women’s 100 fly, outtouching a Kentucky Wildcat to nab the win in 53.90. She also placed second in the 50 free in 22.97

Junior Micah Slaton (Austin, Texas) led a 1-2-3 finish for the Mizzou men in the 100 fly to help the team pick up valuable points in the race. Slaton dropped a 47.94, a time that ranks 16th nationally, to earn top honors in the event. Freshman Danny Kovac (Fort Collins, Colo.) was second in 48.09 and junior Daniel Hein (Sycamore, Ill.) placed third in 48.35. All three times were season-bests.

Mizzou Interim Head Coach Andrew Grevers
“The team poured their hearts and souls into the meet and really had a fun time while going against some of the better schools in the country. It’s so much fun to coach a team that truly has their eye on the prize. The staff was absolutely incredible both days. The team got more and more supportive of each other all meet long. .”

The Tigers are idle until the three-day Mizzou Invite, which runs Thursday, Nov. 15-Saturday, Nov. 17. Preliminary action begins at 10 a.m. each day, with finals at 6 p.m.

Arkansas is beyond lucky to have landed such an outstanding talent with Hopkin, she is changing the program!

She’ll win the 50 free this year, you heard it here first.