“The First Swim That Really Meant Something”: 20 Years Since Phelps’ First WR 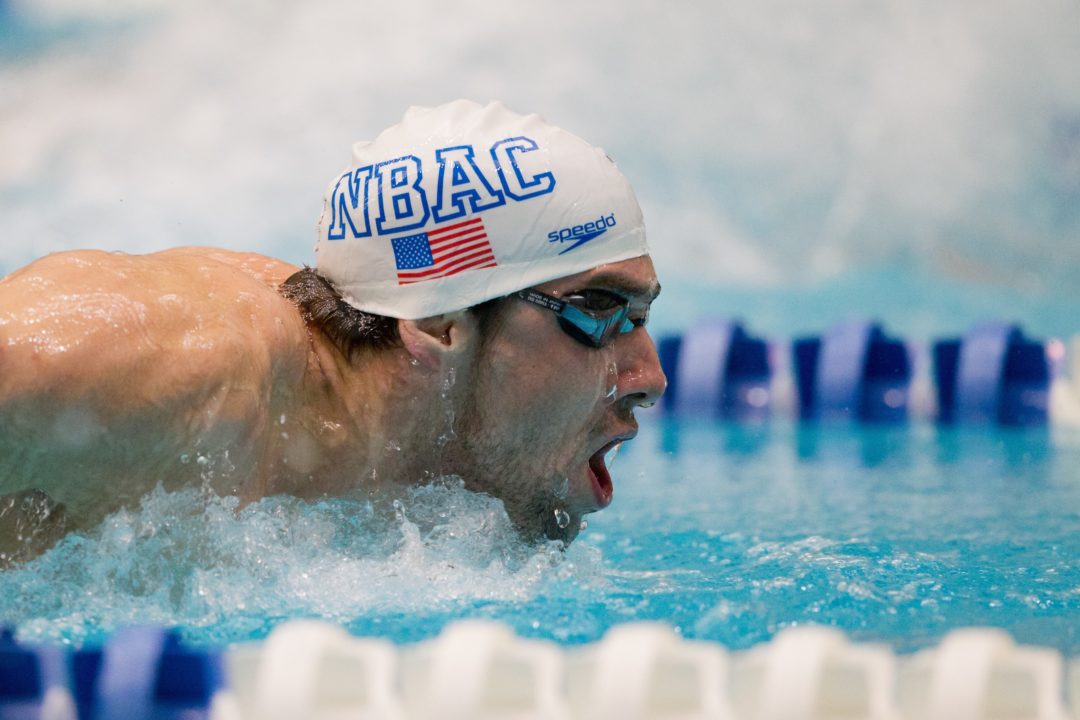 It’s been 20 years and one day — March 30, 2001 — since Michael Phelps, the most decorated Olympic athlete of all-time, first entered swimming’s history books.

At the U.S. National Championships in Austin, Phelps broke his first world record at just 15 years of age, clocking 1:54.92 in the 200 butterfly to erase the mark of 1:55.18 set by fellow American Tom Malchow at the 2000 Olympic Trials.

Coming off of the 2000 Sydney Olympics, where Phelps finished fifth in 1:56.50, he and coach Bob Bowman were intent on making a statement at those Nationals in Austin, which served as a qualifier for the 2001 World Championships.

This included Bowman writing “WR Austin” on almost every note he left Phelps following the 2000 Games, Phelps explained in his book, Beneath The Surface, with author Brian Cazeneuve.

“I hadn’t won a medal (in Sydney) and that drove me for the next six months,” Phelps writes in the book. “I was grabbing for a goal. I needed a goal the way a car needs fuel. I desperately wanted to break a world record to make a statement that I had arrived, to validate the work we’d put in.”

Before the race, Bowman told Phelps to stay with Malchow for the first 100 or 150, “then kill it coming home and you’ll have a great shot.”

Though Malchow got out very fast, that’s essentially how the race unfolded.

“I made a surge later than Bob had wanted, trailing Tom by almost a bodylength at the third wall, catching him with 25 meters left, then hitting the overdrive button and hoping for a time that would be faster than the 1:55.18 Tom had swum in Charlotte in 2000 to set the world record,” Phelps continues in Beneath The Surface.

“I looked up and saw 1:54.92 and didn’t quite believe it at first. For a split second I just floated, squinting through my goggles to make sure I saw the numbers right. Then I went spazo.”

Phelps’ swim made him the youngest swimmer ever to hold a world record, breaking the standard set by Ian Thorpe, who taken the 200 free mark in 1999 at 16 years, 10 months.

Update: while the entire swimming community believed Phelps to be the youngest WR holder, Australia’s Stephen Holland was actually even younger, lowering the men’s 1500 freestyle mark at 15 years, two months. When Phelps broke the record in Austin, he was 15 years, nine months to the day.

“It was the first swim that really meant something,” Phelps said.

That record didn’t hold up for long, as less than four months later at the World Championships in Fukuoka, Japan, Phelps swam a time of 1:54.58 in the 200 fly final to win his first of what would be 26 long course world titles.

Phelps went on to break the record seven more times, win three Olympic gold medals in the event (and one silver), and won it every time he contested it at the World Championships (four more times: 2003, 2007, 2009, 2011).

During his comeback in 2015, Phelps spoke about how the event hadn’t any gotten faster in recent years. That statement was true at the time — no one broke 1:54 from the 2012 Olympics until the 2015 World Championships — something Phelps did in 2003.

But after three years of 1:53 being enough to win, including Phelps’ 2016 Olympic triumph, Milak blew everything wide open in 2019. And he seems intent on continuing to carry the event to new heights this summer, having already been 1:51.40 early in the year.

It’s unfair to compare any swimmer to Phelps. But in this specific event, Milak looks to be taking it to the next level, just as Phelps did over his 15 years at the top.

And it all started in Austin.

If goggles did not fill up in 2008…always thought mp would the first one under 1.50.

Don’t think that was worth 2.04 seconds

Try swimming a 200 fly with your eyes closed. I don’t know if it’s 2.04 seconds either but I’m willing to give the GOAT the benefit of the doubt.

Yeah I think MP would have been “only” 1:51.00 if his goggles didn’t fill up. But you have to remember that he was training for the 400 IM, the 200 free, etc, and had a heavy schedule. That’s what made him the GOAT. He could have focused on 1 or 2 events and pushed them super far, but he trained for and competed in 5 different events, and excelled at all of them.

Swimswam did an article on Phelps’ goal times going into Beijing: https://swimswam.com/beyond-the-8-golds-michael-phelps-goal-times-for-the-2008-beijing-olympics/

But regardless, a 1:50 point was definitely in the realm of possiblities for Phelps. 1:49 maybe not so much.

I agree. I also think the training and shape he had to be in for the 400 IM/that big of a program made it pretty tough to have the speed to be 49 in the 100 fly.

Could’ve seen maybe a 50.2 if it was earlier in the meet, but his improvement in ’09 pretty much all came on the first 50.

That, and the fact that the rules were seriously bent for that 100fly race: the winner was the first guy to press with 3lb per pound, and not the first to touch the wall.

This came from the official Omega spokesperson statement (it helped too, that the Omega was GOAT’s sponsor at the time).

IMHO, they should have split the gold in that 100 fly.

Ikr Milak is such a noob. Not even two seconds quicker than the next fastest active competitor. Really not that impressive, don’t get the hype at all.

It was a terrible swim all things considered. He had a reaction time of 0.74, which was the slowest in the field. Since it was a 200 race, this means that he was doomed from the start. He didn’t go 1:49 but he broke 1:51.

Yeah but what side did he breath to? Did he hug the lanerope?

Was he like a nuclear sub breaking the surface?

Is he a back half swimmer?

How many seniors in that swim? 🥲

Depends on if Cseh and Lochte decide to swim it

Are his parents olympians?

yeah…. and 17.6 isn’t mind boggling at all either right? going where no man has gone Star Trek style. putting up times that any normal human gets put in a mental institution for just even dreaming of them.

Australia’s Stephen Holland is actually the youngest male to set a WR, when he went 15:37.80 to break the 1500 freestyle record in August 1973! He broke Mike Burton’s 1-year-old record by over 14 seconds.

I’d argue that swimming got much more competitive by 2001 when Michael set his first WR, so his age in this swim is arguably more impressive!

Wow, thank you SwimSwam staff for updating the article and verifying Holland as the youngest male WR-holder! I’ve left this comment about Holland several times before, but thank you for verifying and correcting the info!!

This is not correct either. Stephen Holland’s 1500 WR does not hold the distinction for the youngest world record swim (for a male). I am willing to eat my goggles over this.

Okay… then who does? I’m guessing this is a troll comment given your last sentence, but if not I’m genuinely quite interested.

That would be a lame troll. Give you a huge hint. The record was set about 7 minutes before the Holland finished that 1500.

And sorry I called you a troll, haha.

5th in the Olympics at 15 years old and angry that he didn’t win ?! Built different

How is there not video of this race?

Agreed, I’ve looked a thousand times. There is video from that summer’s 1:54.58 at least.

There was a change in staffing at USA swimming not long before the meet (like weeks or two months maybe), with Dean taking over the national event coordination. Not sure if it was Dean or someone like Mike Unger who would have handled that. The television contract didn’t happen at the last minute. Negotiations somehow went south, so the meet wasn’t on tv. And there was no camera phones back then, and the internet as we know it today with everything streaming didn’t exist. Daktronics was the timing and scoreboard operator for the meet, and they had a camera crew to broadcast to the scoreboard. Video boards for swimming was a new thing then. So the broadcast was only in… Read more »