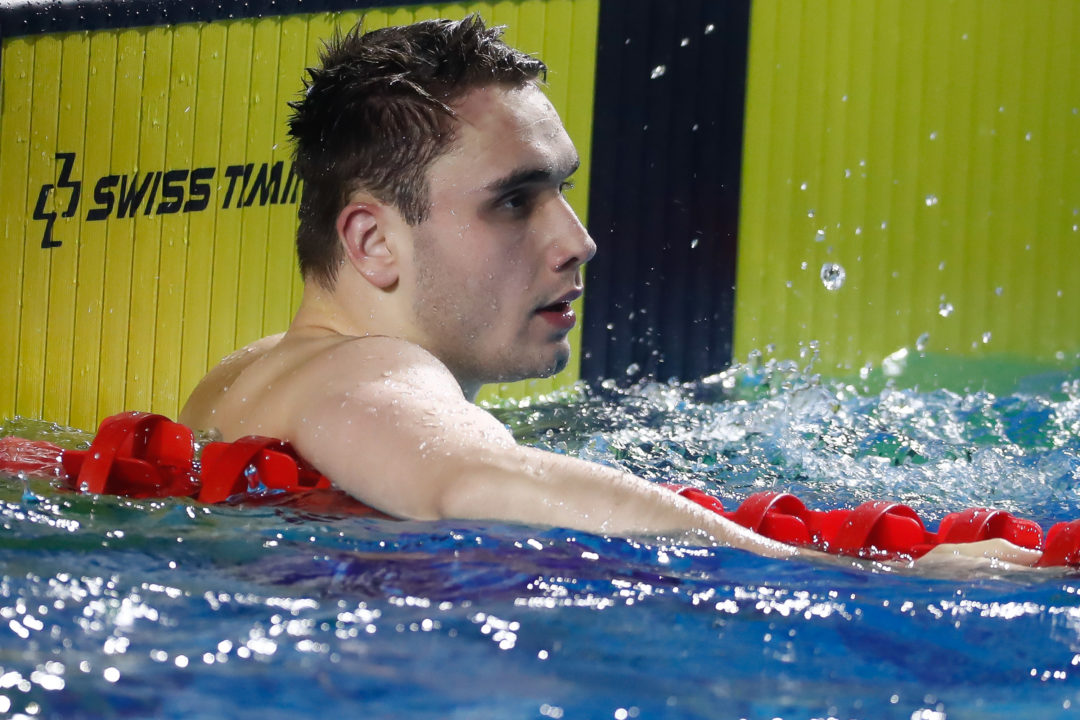 Approaching his own world record in the men's 200 fly, Kristof Milak roared to the wall in 1:51.40 toinght at Hungarian Spring Nationals. Archive photo via Istvan Derencsenyi

Yesterday world record holder Kristof Milak put up a monster performance in the heats of the men’s 200m fly, rocking an effort of 1:52.50. That alone was already one of the fastest in history, with just himself and American Olympic icon Michael Phelps having been faster. You can read more about Milak’s phenomenal heats swim here.

However, it turns out that result was merely the tip of the iceberg as the 21-year-old world champion turned in a finals time of 1:51.40 here in Budapest. That’s right – 1:51.40, a mark which represents the 2nd fastest performance of all-time. His outing here this morning beat out the previous World Record of Phelps’ which was the 1:51.51 Milak took over at the last edition of the World Championships. As such, this outing this morning represents just the 3rd time in history that’s been under 1:52.

Milak crushed an opening 100m of 52.73, before clinching the victory in a backhalf of 58.67. That easily topped the podium here at Hungarian Spring Nationals, with the next-best swimmer represented by Olympic medalist Tamas Kenderesi who touched in 1:56.02. David Verraszto rounded out the top 3 in 1:57.22.

Milak owns the world record in the 1:50.73 historic result he posted at the 2019 FINA World Championships en route to grabbing gold there in Gwangju. In that race, the man who was hit with coronavirus and missed the entire ISL season last year, split 52.88/57.85.

After the race this morning, Milak stated. “The last fifty did pretty badly.” He also stated that his ‘serious preparation’ for the Olympic Games begins now, which makes us a little nervous about what’s in store for Tokyo based on this ‘untrained’ nearly record-breaking performance.

As a bonus, Milak also took the men’s 50m free event this morning, crushing a time of 22.19. That’s a big-time personal best for the man whose previous career-quickest was represented by 22.66 from just this past February. Milak now becomes Hungary’s 4th fastest 50m freestyler ever.

Video here of most of the race. https://www.stateofswimming.com/kristof-milak-blasts-21-84-in-dash-as-warm-up-for-151-40-fastest-morning-200-fly-in-history-inside-the-best-of-michael-phelps-for-a-second-time/

Correct time is 22,19, they forgot to update the link

I understood that he could easily go below 1 minute 50 seconds.
It’s only a matter of time before he’s less than 50 seconds at 100m.

He was ahead of WR pace at the 150, just by his own admission fell off the last 50. But yes, if he is in shape at Tokyo, the 1:50 barrier could go. What an amazing feat that will (notice not using “would”?) be. Akin in some way to the amazing sub-49 100 fly Maggie MacNeil did just last week.

Ok. Maggie’s sub-49 was good/great, but pretty sure peak Sarah (54.6 SCM) could’ve easily done that years ago. This guy is going places Phelps, LeClos, and the rest of the fly greats could only dream of. He’s body-lengths (plural) ahead of anyone in the world. Only Peaty on the men’s side has that degree of dominance in a single event. Dressel is close in the 100 fly.

Welcome to the club! I tried to make a joke in a recent post in which I used the *F* word. And by *f* word I mean the Sunshine state!

“The last 50 wasn’t so good – a clear sign of under-training. Serious preparation starts after this.”

My shoulders started hurting when he said that.

quote of the year.

Still closes faster than Michael Andrew in the 200 IM 😀

If this was him casual a 1:49 seems inevitable with “serious prep”

Finals are not broadcasted on YouTube, just the prelims (on the channel of Magyar Úszó Szövetség hivatalos csatornája form 5PM CET, there will be relay time trials as well, they may start somewhat earlier). You can watch the finals live on the page of M4 Sport (https://m4sport.hu/) from 9:30 AM CET. There is some chance that it will be available soon for rewatch.

he’s the reigning world champ and world record holder… no one’s within seconds of him. I think this is almost as easy to predict as peaty… unless I’m missing something?