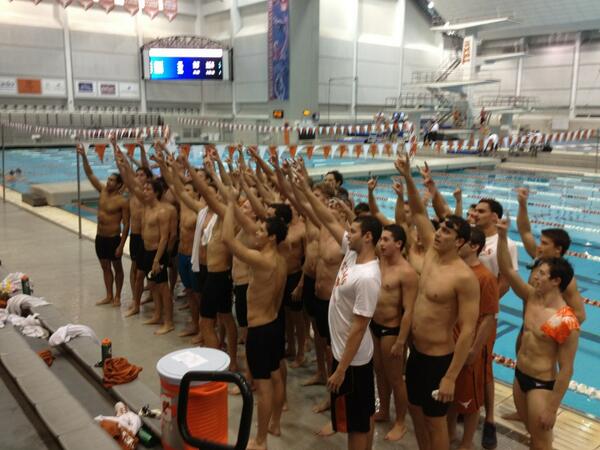 The University of North Carolina swimming and diving teams stopped in Austin to take on the Longhorns, en route to the SMU Classic that begins tomorrow. UT ended up victorious, winning the men’s meet 171.5-126.5 and women’s meet 171-129.

University of Texas started the meet off with a win in both the medley relays. On the women’s side Lily Moldenhauer, Madisyn Cox, Skylas Smith and Gretchen Jaques bested UNC’s A relay by over two seconds. The men’s relay was a bit closer, with UT’s team of Aaron Gustafson, Imri Ganiel, Jack Conger and Caleb Weir getting to the wall first. Conger split a 20.84 in his butterfly leg, only .7 off their freestyle split.

Stephanie Peacock seems in top form after having to withdrawal from the 2013 championship season due to illness. She finished in 9:42.95 in the 1000 freestyle. Kaitlin Pawlowicz was second for the Longhorns, 9:51.24.

Danielle Siverling led wire-to-wire in the 200 freestyle, besting Sam Tucker and Moldenhauer. Siverling finished at 1:48.10, Tucker at 1:48.67, and Moldenhauer at 1:48.81. Teammate Peacock returned back to the block after the 1000 to finished fourth.

The first NCAA standard of the meet came from Conger in the men’s 200 freestyle. He registered a B standard with his swim of 1:37.40. He dominated the field of three Tar Heels, who settled for second through fourth, by nearly two seconds.

Sarah Koucheki registered UNC’s first B standard of the meet with her swim in the 200 butterfly. She finished in 1:58.57, and lead her teammates Meredith Hoover and Cari Blalock to a Tar Heel sweep in the event. Dominant in the event on both teams, UNC’s Dominick Glavich won the men’s race in an impressive 1:45.41. That bettered the field by over three seconds and clocked in under the B standard.

Texas has speed, and went first and second in both the women and men’s 50 freestyle. Jaques and Caleb Weir finished in 23.33 and 20.34 for the Longhorn win.

Karosas and Annie Harrison traded off the lead throughout the 200 backstroke. Karosas had a strong final 50 to take the event, 1:57.64 to Harrison’s 1:57.86 – both NCAA B standards. That was Karosas second individual win of the meet. Will Glass won the men’s race in 1:47.70.

Cox returned in the breaststroke event to take her second individual win of the meet in the 200. She finished just under the B cut in 2:15.54. Katie Rechsteiner from UNC was second at 2:17.29. Licon moved up and finished first in the longer race of the meet at 2:01.15. UNC would go second through fourth in the event with Speese, Alex Gianino and Brian Bollerman.

Jaques, Koucheki, and Moldenhauer battled in the women’s 100 butterfly. All turned relatively together at the 50, but Jaques, who had the slight lead at the 50, had the strong second 50 to take the event in 54.68. Koucheki was next in 54.82 and Moldenhauer in third at 54.83. Conger would dominate his individual 100 butterfly, with another B cut, finishing at 47.51.

Texas was dominant on the diving boards. They took three out of the four events, where they would also finish first and second at least. UNC’s Jack Nyquist took the men’s 3 meter for the sole Tar Heels win on the boards.

The 400 freestyle finished off the meet, with UNC’s A team of Ally Hardesty, Siverling, Lauren Earp and Koucheki finishing in 3:22.15 – all split 50-point. The men would also win their race with Brad Dillon, Logan Heck, Nic Graesser and Stilley finish at 3:01.20. Notably Stilley anchored in 44.92, and Conger on the UT’s A relay split 44.41.

Love watching John Martens swimming. He is 5’10” but swims so easy all 4 strokes. Dropped 3 seconds tonight and killed my favorite, Will Licon. Will died on 400 IM – he swam 30.3 last 50 freestyle.I hope he is just very tired, and this is not a sign he cannot swim 400 IM. His legs do not look he can do 400 IM though. He did dominate 200 breast. Little bit disappointed with Imri Ganiel’s technique. New breaststroke addition, Radu Prunoiu, transfer from Incarnate Word, is terrible.

Jack Conger can do it all – well except breaststroke. So much fun to watch him.
The freshman, Melody Cox, was swimming really good.

Only one remark about NC: Stephanie Peacock… Read more »

That’s the kind of comment I’d hope you’d get banned for. Totally crossed the line by calling a student-athlete out.

This is by no means a personal attack on Radu – actually I think he is of Romanian origin and a fellow Orthodox Christian and neighbor. However, if I cannot discuss here his technique and criticize it, what is this forum for – to be swimming groupies? Not interested in that. He is an athlete and chose to be part of highly visible program – he should be able to handle comments from people who do not know what they are talking about like myself.

I’m sorry, I think I missed the discussion of technique here.

Well it sure came off as somewhat personal. As a Longhorn alumni and ex-collegiate swimmer, it just comes across poorly when you say something like that. Saying ‘man, he didn’t look impressive in his debut as a Longhorn’ or ‘jeez, his stroke looked awful’ are completely different than saying ‘That new breaststroker is really bad.’

In addition, he chose to be a collegiate athlete, not a professional athlete. Yes, he’s at a highly visible and esteemed program, but that shouldn’t mean he’s a free target for pot-shots from ‘a guy who doesn’t know what he’s talking about’.

You could probably call me a bit of a groupie, but anyone on this website has a bit of groupie in them for sure!
Doesn’t matter where he is from or his religion. The bottom line is this: we all like to see exciting swimming that is fast. That young man is somebody’s son, not just someone at whom you can take anonymous cheap shots just because “he’s put himself out there”. If you don’t think you know what you are talking about, then you should be more careful about what you write. If you don’t like how he swam, you don’t say, “he is terrible”. Talk about sweeping judgements. My son will be swimming in his first college… Read more »

>I hurt for the young man that made a mistake. I didn’t want to criticize him…the look on his face said it all.

That is different – that was a mistake. There is no excuse for swimming 2:13.86 on 200 breast at this level – that is terrible no matter how you slice it.

>…I would be heart-broken if someone did this

Why, who cares what I think? If he does, he will try to get better and prove us/me wrong. It is about him not you – listen to me, I am Swim/Psycho Doctor.

First amendment man. Any idiot can say anything stupid. No need for calling for pyschdads ban.

You are definitely living up to your name with that comment. Instead of calling him terrible maybe point out thing he could improve upon.

Also it was a poor attempt on your part to try and back peddle and say you were merely saying his technique was terrible when it is obvious to all that you meant no such thing.

Psycho…rude comment about Radu. Experienced swim parents and fans know that you don’t judge based on one meet. ANYONE can have a difficult meet. I don’t know Radu, but give him a chance for Heaven’s sake. Ease up…it’s a little early in the season for snap judgements.

Wahoo strong, I couldn’t agree more with your comment. Its important to recognize first that these young men and women are ALL world-class athletes. Its safe to say that the “slowest” women could not only smoke psychodad in the pool, but also quickly dispatch him in a fist fight. Secondly, my guess is most of these kids did this meet on top of a killer week of practices.

Let’s pump the breaks on calling all NCAA athletes world class because that’s just not true.

I was not commenting on his performance (result) which I expect to be slow at this point of season (Licon was terrible on 400 IM, for example), but Radu’s technique is very very poor.

At this point, I think we all know what we can expect from PsychoDad – especially about breaststroke.

Clark Smith is very very tall. Also needs some muscles really fast. Dax Hill did a “time trial” with 2 other swimmers during the break and swam 100 breast 57.31. Nothing to write home about.

Unacceptable at this level, at any point in the season.

Why do you only care about breaststroke?

I don’t. I tweet a ton about backstroke, for example. I give presentations to high schools in the area about backstroke (and breaststroke and freestyle and fly). Our son was top 3 in breast and top 4 in backstroke in Texas in last SCY State champs.

Exactly! 2:13 in college level? That’s just crap. It dosent matter if its October you need to be able to swim a minimum sub 2:10 200 breast if you are swimming at a top division 1 school.