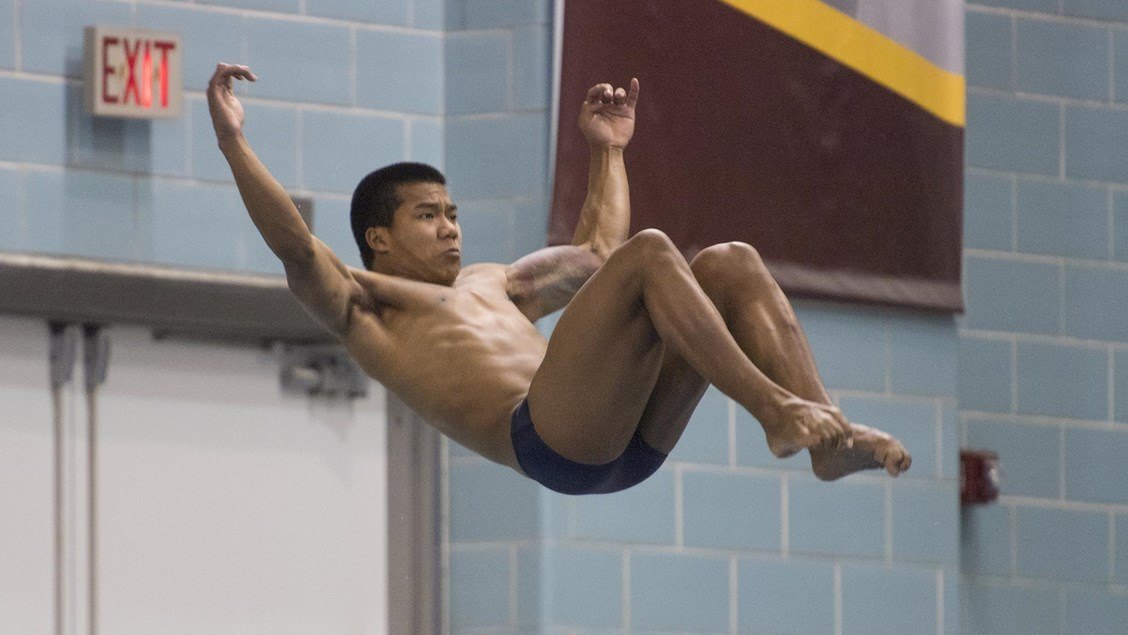 The Texas Longhorn men qualified all three of their returning NCAA diving scorers to the 2019 NCAA meet this morning through the Zone D Championships in Austin. Archive photo via Texas Athletics

The Texas Longhorn men qualified all three of their returning NCAA diving scorers to the 2019 NCAA meet this morning through the Zone D Championships in Austin.

The first day of Zones features the 1-meter springboard for men. At NCAAs last year, Texas last year scored Jordan Windle in fifth place, Grayson Campbell in eighth and Jacob Cornish in tenth. All three have qualified for NCAAs again this year. Campbell was third, Windle fourth and Cornish eighth at the Zone D meet. In addition, Reed Merritt finished 11th for Texas. That doesn’t qualify him for NCAAs, but since he finished in the top 12, he’s eligible to dive this event at NCAAs if he qualifies in one of the other two events the next two days.

LSU’s Juan Hernandez won the men’s 1-meter at Zone Ds this year. Hernandez was seventh at NCAAs a year ago.

On the women’s side, Texas qualified three to NCAAs. Samantha Bromberg was second overall on 3-meter, with Alison Gibson third. Meghan O’Brien wound up 8th. Zone D is the top zone this year, holding the most qualification spots, and all 12 of the NCAA-eligible finishers on 3-meter will earn official invites.

Bromberg was an A finalist on 3-meter at NCAAs last year, finishing sixth. Gibson was a B finalist and scorer. O’Brien was also an NCAA qualifier last year. Bringing all three of those divers back is a big boost for the Texas women, who are in line to contend for a top 4 (or higher) finish at NCAAs.

Kansas senior Vicky Xu – a new addition to the roster this year – won the event by 11 over Bromberg. Xu should be a top contender for the NCAA title this year. The defending NCAA champ is Arkansas sophomore Brooke Schultz, who finished fourth in Zone competition. Bromberg and Minnesota’s Sarah Bacon (sixth today) are the other returning A finalists.

I’m so proud of Texas Longhorns swimming and diving team… whose swim team is so strong that they qualified more swimmers Than any team in the NCAA. Fact. I’m so proud of the divers who continue to bring it. Watching them perform is amazing!
Way to go texas divers!!!! Hook’em Horns!!!

Diving is lame. It belongs with gymnastics. I’ll gladly take the heat for everyone else afraid to say it.

Its as different as water polo. Isn’t diving counted separately at the international level?

Is there a chance Texas will have to leave someone who qualified for ncaa at home?

They’ll have to. They have 17 that will be invited.

Fairly likely. 3 divers count for 2 roster spots (divers count as half a roster spot). NCAA roster limit is 18. Texas could have 18 or so swimmers get in, though quite a few of their guys are on the bubble after some last chance meets. If they qualify more than 16 swimmers, they’ll have to choose between swimmers and divers – and they’ll probably choose to take the divers, all of whom are likely scorers.

Isn’t the enter deadline today? So they had to decide before or can they scratch swimmers afterwards?

They can scratch swimmers afterwards – then the NCAA will pull from the alternate list to fill the spots.

Swammer – no, they can always scratch swimmers later.

Great for TEXAS! Diving is a phenomenal part of our NCAA Sport of Swimming and Diving. So glad this University engages fully in our sport. I root for the “swim” teams heavy laden with great divers which add considerably to their NCAA Chances like Texas, Indiana and Tennessee.

Lmao this is an ultra Cal subtweet.