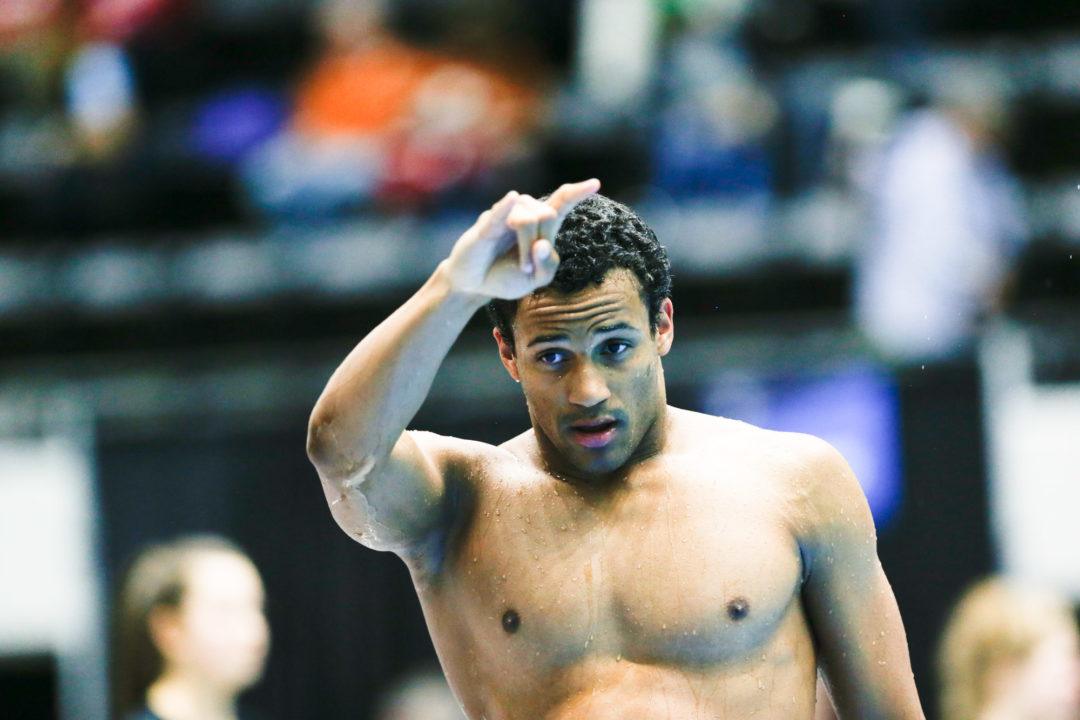 Brett Ringgold and Jonathan Roberts each rallied for a winning double in the Horns' victory of the season on the men's side.

Ringgold swept his signature sprint races, starting with a 19.93 to beat teammate Joseph Schooling (20.13) to the wall in the 50 free. He followed that up with a 44.46 in the 100 free, using his front half speed to take the edge over teammate Townley Haas (44.89). Reigning NCAA champion Haas won his signature 200 free earlier in the session with a 1:37.38. Olympic champion Schooling continued his 100 fly winning streak for the Horns, rolling to a 47.18 for the win. Schooling came up big on Texas’ 200 medley relay as well, putting up a 20.39 fly split to bring them from behind as they took down UNC.

After winning both breaststrokes against NC State, Olivia Anderson swept the breaststrokes races in back-to-back meets with her wins against UNC. She led the 100 breast from start to finish with a 1:02.09. In the 200 breast, she came from behind, outpacing UNC’s Caroline Hauder on the back half to out-touch Hauder 2:15.06 to 2:15.15 at the finish. Teammate Claire Adams also swept her stroke specialty, winning the backstrokes with a 53.48 in the 100 back ahead of Hauder (54.90) and a 1:57.39 to out-touch teammate Kaitlin Harty (1:57.51) in the 200 back.

UNC’s Caroline Baldwin, a U.S. National Teamer, was the top performer for the Tarheels as she swept the women’s sprints. Baldwin ripped a 22.13 to dominate the 50 free ahead of Texas sprint standout Rebecca Millard (22.89). She was even more dominant in the 100 free, posting a 48.24 to touch nearly 2 seconds ahead of Millard (49.92).

The Longhorns opened the meet with a win in the 200-yard medley relay, where junior John Shebat, sophomore Ryan Harty and seniors Joseph Schooling and Brett Ringgold were victorious in 1 minute, 27.65 seconds.

Texas stretched its lead behind a one-two finish from senior Jonathan Roberts and freshman Chris Yeager in the 1,000 freestyle. Roberts took the win in 9:17.84 while Yeager followed in 9:25.98. Junior Townley Haas, the silver medalist in the 200m freestyle at the 2017 FINA World Championships, claimed the same event Saturday in 1:37.38.

Freshman Sam Pomajevich registered his first win as a Longhorn, as he claimed the 200 butterfly in 1:48.52. Ringgold notched the first of his two individual wins in the 50 freestyle, where he topped out at 19.93. Schooling followed in second at 20.13. Ringgold completed the sprint sweep with his winning mark of 44.46 in the 100 freestyle.

The Longhorns put the finishing touches on their dual-meet win with a  victory in the 200 freestyle relay, where Ringgold, Shebat, junior Tate Jackson and Schooling finished in 1:20.46. Texas collected two more points from its third-place relay, which finished in 1:22.01.

Freshman Jordan Windle led the UT diving contingent with his second-place finishes on one-meter (384.90) and three-meter (412.13).

The Texas divers host the UT Diving Invitational next week (Nov. 16-18) at the Lee and Joe Jamail Texas Swimming Center. The swimmers host the Texas Invitational from Nov. 29 through Dec. 2.

North Carolina won the meet’s first event, the 200-yard medley relay, before the Longhorns took control of the meet. Freshman Evie Pfeifer registered the first of two individual wins on the day in the 1,000 freestyle, where she was victorious in 9:55.54. Junior Joanna Evans helped solidify a one-two Texas finish in the 200 freestyle with her winning time of 1:47.03. Her classmate Quinn Carrozza followed in 1:49.49.

Sophomore Claire Adams gave Texas its third straight win behind her 53.48 in the 100 backstroke. Junior Olivia Anderson swept the breaststroke events and took home the win at 100 yards in 1:02.09.

Junior Remedy Rule helped deliver the Longhorns a sweep of the butterfly events. She claimed the 200 butterfly in 1:58.74, while sophomore Lauren Case followed in second at 1:59.50. Sophomore Alison Gibson, the 2017 NCAA one-meter diving champion, was victorious in the same event Saturday with 334.28 points.

Adams completed a sweep of the backstroke events with her 1:57.39 at 200 yards. Sophomore Kaitlin Harty followed closely behind in second at 1:57.51 while Pfeifer added three more points for Texas with her third-place mark of 1:59.56.

Anderson stormed home in the final 50 yards of the 200 breaststroke and rallied past UNC’s Caroline Hauder at the touch in 2:15.06.

The Tar Heels claimed the three-meter diving event, but UT’s Meghan O’Brien and Gibson helped to limit UNC’s point gain with their second- and third-place finishes.  With the team victory well in hand, Texas elected to exhibition the 200 IM, but Pfeifer came away with the top time nonetheless in 2:00.49.

The Longhorns finished off the dual-meet win by edging the Tar Heels in the 400 freestyle relay. Adams, senior Rebecca Millard, Evans and Rule teamed up to finish in 3:19.08, less than two-tenths of a second ahead of the Tar Heels.

The Texas divers host the UT Diving Invitational next week (Nov. 16-18) at the Lee and Joe Jamail Texas Swimming Center. The swimmers host the Texas Invitational from Nov. 29 through Dec. 2.

“They [Texas] did a great job,” said UNC head coach Rich DeSelm. “I felt like we gave away a few things. Last week we got the lead and when we got ahead it felt really good. This week we never really got the lead and I think we let that affect how we conducted ourselves and we have got to learn from that.”

Caroline Baldwin continued her strong senior season with two individual wins. Baldwin placed first in both the 50-yard and 100-yard freestyle in times of 22.13 seconds and 48.24 seconds, respectively. Both times were her season bests this year.

“We were able to see Caroline Baldwin in one or two different events. She swam a 50 freestyle in that was lightning fast,” exclaimed DeSelm. “She actually broke the pool record in 100-free which is pretty remarkable because there has been some pretty awesome competitions in this pool.”

The Tar Heel men’s breaststroke swimmers looked strong today taking first, second and third in both the 100-yard and 200-yard events. Valdas Abaliksta placed first in the 100-yard with a time of 55.42 seconds followed by Michael McBryan at 55.67 seconds and Austin Sellers at 56.89. In the 200-yard breaststroke, McBryan placed first, Abaliksta second and Sellers third with times of 2:00.56, 2:01.73 and 2:03.05 respectively.

On the diving side, the Tar Heels placed first in three of the four events. Diving coach Abel Sanchez was thrilled with his team’s performance today.

“I’m really proud of our men and women,” claimed Sanchez. “They’ve done a fabulous job. I’m a little speechless which is unusual.”

Greg Duncan and Sean Burston had outstanding performances on the boards today. Duncan placed first in the one-meter, scoring 384.90 points.  Burston scored 413.85 points to finish at the top of the leaderboard in the three-meter.

“That was huge for me,” said Burston. “I was speechless when I saw the scores go up. That just shows me personally how much I’ve come along since freshman year and how much more I can improve.”

“Trying to beat myself this week is usually what I focus on,” claimed Dawson.

Count us out. We love it.

Drop us in the power rankings.
Beat us in our home pool in the last session of NCs. We think about it every day.
(Real talk, Chuck Katis is a marvelous, kind person, and he came through so clutch for the bears that year)

Tell us we’re slower than last year.
Comment that our guys won’t put up the times.

Give us more fuel.

I don’t think anyone is counting the three-time defending NCAA champions out. Most people are smart enough know there is a difference between a dual meet and a taper meet. They were also unanimously voted #1 in the most recent power rankings on this site. Best of luck to the guys looking for a 4peat this season!

The power rankings that will come out next week I would assume will have Texas much lower than #1.

Hmmm… I suppose they could drop some since it may not be ENTIRELY based on NCAAs only. I’m a little unclear on what their power rankings are based on. Still I doubt they’ll totally write texas off. They haven’t done that. We have to wait and see how they vote but it’s pretty clear the Horns aren’t being counted out at all this season by the writers. They do things differently than, say, the CSCAA rankings which might overlook how tired Texas is.

Other good teams like Cal haven’t had some of their big scorers doing too hot either. Just doesn’t grab as much attention cause they have an easier schedule and haven’t had any attention grabbing losses yet. It’s… Read more »

Plot twist, I know it sounds crazy but

The Texas women win all their dual meets and lose NCAAs

The men should be worried about making their A times at this point. They’re slower than last year at this time, almost across the board. Eddie said they weren’t rested enough for the first day at NCAAs last year. He better start resting them soon.

Eddie ALWAYS says his swimmers aren’t rested enough. ALWAYS. And always says the pool isn’t fast. This isn’t a knock….just have to take it with a grain of salt.

I hope you’re not suggesting that people like Haas, Shebat, Roberts, and Schooling will struggle to get A times..

That’s exactly what he’s suggesting. It just makes no sense.

he trolls every Texas article but keeps getting fed…

They did show their potential to swim fast this season (Case in point: Orange-White meet) It may not have been an official meet & they might have suited-up, but the Texas guys still posted crazy fast times, particularly Schooling’s 50 free and 200fly, as well as his best time in the 100back. Tate Jackson had a pretty impressive 100fly as well!

Will was a very good person and asset for the team, and they will lose points at NCAA’s because of his absence, but it probably won’t be enough to lose. Hey, but if Cal gives me a fight and wins that would be super cool too. I’m a happy camper either way.