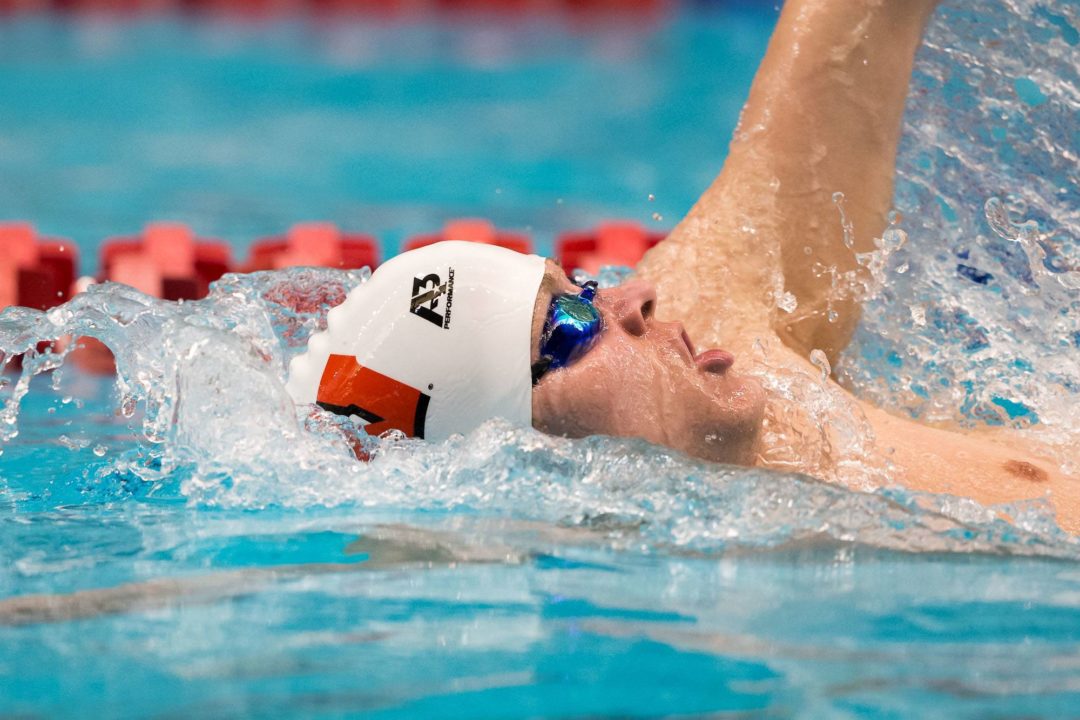 The Michigan Wolverines' 200 medley surprised with an NCAA Record on day 2 of this meet. They'll hope to start off hot again on day 3 to lock up the NCAA Championship. (Photo: Tim Binning/TheSwimPictures.com)

A team championship is on the line on Saturday, and it appears as though the title will be going to either Michigan for the first time in almost 20 years, or Cal for the third time in three years. Both Michigan and Cal on the final day have races that will see both teams have very strong events, and both teams have very weak events.

We should also see a lot of Florida Gators on the podiums on Saturdays, as this is a big day for Gregg Troy’s crew. In terms of record watches, the biggest is Kevin Cordes’ in the 200 breaststroke (though, yesterday Michigan’s 200 medley relay came out of nowhere, so don’t count out any race for a record breaking swim). Also remember that Cal’s Tom Shields was faster than the NCAA Record mid-season in the 200 fly, but it didn’t count officially as the race wasn’t done while representing Cal.

All the links you need to follow the action, including live stream and live results, are available here.

As we alluded to after his 100 backstroke, Wisconsin’s Drew Teduits was set up for a big 200 backstroke, and that’s exactly what he did with a 1:39.19 – a new personal best and Wisconsin school record and the fastest time in the country so far, and he looked through the middle 100 yards of this race like he still had more to give.

He and Cal freshman Jacob Pebley (1:39.82) swam next to each other, and looked like they pushed each other to those top two seeds. Their relative strengths were clear: Teduits was big underwater, but above it Pebley had a faster turnover and made up a lot of ground.

Tonight, they’ll be bound by Indiana’s Eric Ress, another great swimmer on top of the water, who was 1:40.26; and Stanford’s David Nolan in 1:40.82. Nolan has a lot of individual momentum, and has shown throughout this meet the ability to drop between prelims in finals. Then again, Ress and Teduits both had significant drops in finals as well.

Those four will be the focus tonight, but will be joined by Stanford’s Matthew Swanston, who was 4th at last year’s meet, and Texas’ Austin Surhoff in 1:41.16. Texas got two into the A-Final, with Kip Darmody placing 8th in 1:41.45.

Cal got Pebley into the A-Final, but his teammate Marcin Tarczynski just missed what would have been a big B-Final by finishing 17th. Michigan’s top finisher Ryutaro Kamiya swam a lifetime best of 1:42.47, but ended up only 19th. Stanford senior Matt Thompson, who was 3rd in this race last year, was only 13th in prelims.

More evidence of how fast this meet has become: Tarczynski would’ve been in the top 8 at last year’s meet, but couldn’t make top 16 this year. That will be a big factor in why we saw some guys surprisingly fall out of their expected finals.

USC’s Vlad Morozov didn’t really turn it on until the last 25 here, but that was all he needed to cruise to the top seed in 41.88. That’s about three-tenths faster than he was in taking the top seed in last year’s prelims.

Stanford’s Aaron Wayne will be next to him tonight in lane 5 in 42.26, and Auburn’s Marcelo Chierighini is 3rd in 42.42. Chierighini will expect to be under 42 tonight; though Morozov has looked a little more tired as this meet has gone on, he’s still the favorite.

Louisville’s Joao de Lucca, winner of the 200 free on Friday, is the 4th seed in 42.61. He once again was casual through prelims, though perhaps not as casual as he was in the 200. He could very well be under 42 in finals as well.

Cal got a big lift in this race when sophomore Seth Stubblefield lept up from the 37th seed coming in to 5th at the finish in 42.68. Alabama’s BJ Hornikel was 6th this morning in 42.69 for the Crimson Tide’s first A-finalist of the meet; the A-final was rounded out by Texas’ Dax Hill and Michigan’s Bruno Ortiz (the younger brother). Ortiz’s move wasn’t as big as Stubblefields, but he did move from a B-Final seed to an A-Final seed. That at least gives Mike Bottom the option of having him coast through the individual to be rested for the relay.

Minnesota’s Derek Toomery is atop the B-Final in 42.75, followed by USC’s Dimitri Colupaev and Utah’s Nick Soedel (his second final of the meet). Michigan got a second finalist with Zack Turk placing 14th in 42.91.

Arizona’s Kevin Cordes didn’t mess around in prelims. Looking extremely relaxed, Cordes took about 32 strokes on 8 lengths en route to becoming the first swimmer in history (college, post-grad, or anywhere else) to go under 1:50 in the 200 yard breaststroke with his 1:49.79. That broke his own record of 1:50.73 by nearly a full second. (Read more about the record here).

If anyone can challenge him, it would by Indiana junior Cody Miller, who was 7th in prelims in 1:54.16. He is the second-fastest swimmer in history in the event behind Cordes, but we’ll have to see how gunshy Miller is after being DQ’ed for his dolphin kicks in the 100 on Friday.

The 2nd seed will be Arizona’s Carl Mickelson, blowing away his season-best, with a 1:53.10 this morning. He didn’t take the same chances in prelims of this race as he did in prelims of the 100 (where he ended up in the B-Final), as Arizona will now try for their second one-two breaststroke finish.

Dartmouth’s Nejc Zupan wasn’t as good in his 200 IM as he was at Ivies, and DQ’ed in the 100 for a butterfly kick as well. With only two swims thus far, though, he was well-rested for this 200 breaststroke, and took the 3rd-seed in the morning in 1:53.29. That rebreaks his Ivy League Record in a race where the Ivies have had quite a few impressive swimmers in their history.

Just as Cal’s breaststrokers lifted them up, the Golden Bears took their first really big hit of the session in the 200 fly prelims. Tom Shields made it safely into the A-Final in 1:41.74 as the 3rd seed. His teammate Will Hamilton, the defending champion, added a second from his previous season best to place 9th and in the B-Final. Wisconsin’s Daniel Lester, swimming in a much earlier heat, was .04 seconds better for that 8th spot.

Michigan, meanwhile, got two into the A-Final. Freshman Dylan Bosch is the top seed in 1:41.33, out-racing his South African countrymate Sebastien Rousseau (1:41.52) in heat 5 for that honor, and Kyle Whitaker ended up 7th in 1:43.51. Getting both of those guys up and secured in a top 8 finish is huge for Michigan, regardless of where they go in the final.

For Florida, locked in a tight battle for 3rd place with Texas, Stanford, and Arizona, getting those three swimmers (as seeded) into the A-Final should help their chances tonight.

Michigan got even more good news when Peter Brumm managed to make the B-Final in 16th with a 1:44.22. If the freshman can contribute that way tonight, it will give Michigan big momentum headed into the final relay where they can seal their title.

This might have been the nail in the Cal coffin; even though it’s just prelims, Michigan took the top overall seed in the 400 free relay with a 2:50.42, including all four splits better than 42.7.

Michigan won’t necessarily win; USC was 2nd in 2:50.71 (including a 40.88 split from Vlad Morozov), and the rest of the Trojans were 43 lows. Expect at least Quintero and Colupaev to get under 53 to challenge in this final.

Even if the Wolverines don’t win, with how consistently-well they’re swimming, it’s hard to see them falling much below 4th. Even if Cal were to win the B-Final, that would still be a 12 point advantage for Michigan to close the meet – when they’re already expected to have a lead.

What just happened to Owens in the 2 back? And Tarcynski not making it back is really hurting Cal’s chances

I think some of Auburn guys are a bit out of taper.They are alternating some good/bad swims… Chieriguini is so-so(for a guy was told capable to beat Cielo 50record).Owens made 45.7 in 100 back and 46.2 but 20.9 in medley relay!And now 1.45…. maybe a touch of flu?
Despite his 17.86, i was expecting more from Morozov.He must be only semi-rested because RUS trials in April.

At Sec12 Auburn used Mendes on the relay instead of Leon right?

Rafael – they sure did. It seems like Mendes didn’t have enough time to carry his taper over to this meet, whereas Leon has been swimming pretty well. We’ll see if they change it tonight.

Wow… Another good swim from early heats for Cal… Ortiz sneaks in… Interesting. If Stubblefield beats Ortiz and Turk doesn’t bring it, Cal would win this event in points.