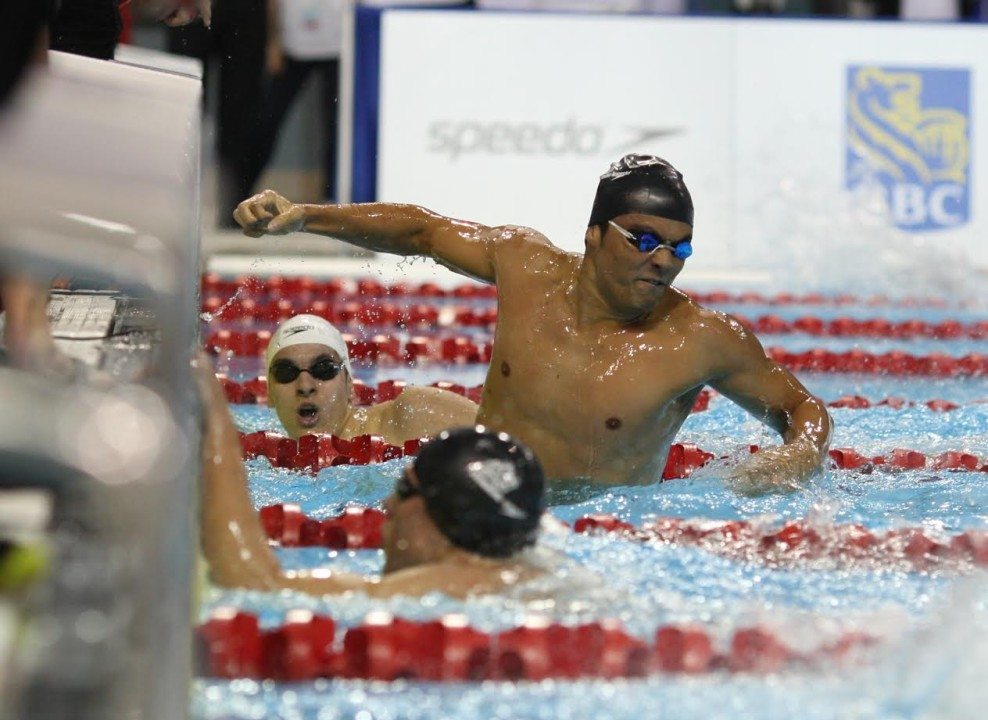 The six swimmers above are guaranteed a spot on the team considering that they're the only ones who have fully met the priority 1 selection criteria. The others are fairly safe to go to Pan Am Games, but a spot on the World Championships roster isn't certain. Current photo via Chris Tanouye

Due to Canada’s complex Canadian Trials standards, there’s a certain confusion about who’s on the team and who isn’t based on previous results. We on Swimswam thought we’d clear up some of the confusion, and put up a potential roster.

Note: Top ’16’ standards do not include non-Olympic events

The six swimmers above are guaranteed a spot on the team considering that they’re the only ones who have fully met the priority 1 selection criteria. The others are fairly safe to go to Pan Am Games, but a spot on the World Championships roster isn’t certain.

This morning, three more swimmers met the FINA ‘A’ swimmer. Michelle Williams and Chantal Van Landeghem are the top two seeds going into the finals of the 100 freestyle, and were both under the mark. Yuri Kisil also did it in the 10 free. Russell Wood managed to better the standard in the 50 back to round out the four who were able to do it this morning.

Mitch Bowmile and Swimswam staff: Thank you for providing this explanation of the Canadian selection procedures for the Pan Am Games and World Champ Team; as a fan watching the excellent video coverage, it was very confusing to understand what was going on without this info. What I still don’t understand is why Canada decided they needed the “Top16” standard on top of the FINA A standard. As an outsider (I’m in the US) it seems like Swimming Canada doesn’t want to invest the resources to send an athlete to Worlds if they don’t have a reason to believe they’ll make the semi-finals. I don’t want to insult Canadian readers, but this doesn’t seem like a great way to help… Read more »

We’re led to believe it will make for stronger swimmers at some point in the future. But the rules look a little too subjective for some swim fans here. It’s a bit of an elitist approach. Most people get the priority one. If you’re fast, you’re fast. It’s when we get to choices “at the discretion of” so-and-so, that some people start feeling uncomfortable. Sport is best when it’s entirely objective.

What this post failed to mention is the amount of subjectivity involved in the selection process.