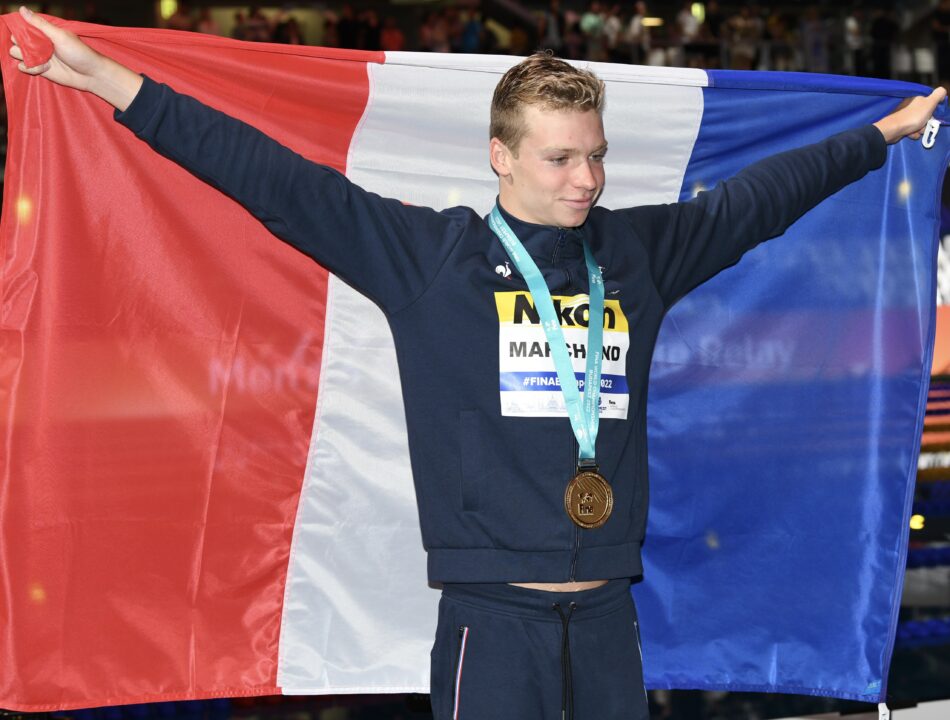 With longevity and competitiveness across a number of events, fans believe Ryan Lochte was the Michael Phelps’ best rival during his career.

Our most recent poll asked SwimSwam readers which performance was the early highlight of the 2022 World Championships:

Question: Which male swim was the highlight of the first half of Worlds?

This poll took a look at three breakthrough swims that took place in the early stages of last week’s World Championships.

Each swim on its own stands up as one of immense significance.

Marchand swam a time more than five seconds faster than what it took to win Olympic gold last year. Ceccon absolutely obliterated the world record, having never broken 52 seconds previously and then coming in at 51.60. And the 17-year-old Popovici became the second-fastest swimmer in a textile suit, the fourth-fastest all-time, and was over a second quicker than the Olympic-winning time in the 200 free.

The poll results show us just how unexpected and incredible Marchand’s 400 IM was, as he garnered nearly two-thirds of the votes despite going up against two other swims that were two of the best we’ve seen in the past decade.

Marchand came into the competition with a personal best (and French Record) of 4:09.65, and at the Tokyo Olympics, 4:09.42 was the time required to win gold.

The European men really stepped up in Budapest, with some of the meet’s other top performances coming from Hungarian Kristof Milak in the 200 fly (1:50.34, new world record), Italian Gregorio Paltrinieri in the 1500 free (14:32.80, second-fastest swim in history) and the Italian men in the 400 medley relay (3:27.51, tying European Record and upsetting the U.S. for gold).

Below, vote in our new A3 Performance Poll, which asks: Who would you crown “Swimmer of the Meet” if you could only select one from the 2022 World Championships:

The 200 fly was the greatest performance of the meet.

Thing is before Leon swam the 4 IM in 4:04.2 I thought that maybe there was some improvement to be made likely in breastroke but never gave too much thought to it even Marchand at first. Boy was I wrong. Seems like there is a lot of improvement with the 4 IM world record. Also little fact if Marchand had the fly, back, and free splits Phelps had with his 4:03 and also had the 1:07 split to go along, Marchand would be 4:00.56 I now believe that it’s a possibility for him to challenge the sub 4 minute barrier. And honestly with Bowman I think there is definitely a chance for him to do that.

Phelps claimed there was room to lower this record. Marchand will never break 4:00 though.

some have already started the rumour that dropping 5 seconds in a year is suspicious. Thank God he didn’t break the world record, imagine the gossip then!?

Interesting how people only suspected Ye Shiwen and not any others, including Marchand. I wonder why that may be? 🤔

He did switch to Bowman, who’s the one who trained Michael to a 4:03

Also remember how young he is. Seems a plausible time drop, given the duration of the swim.

People on here love to talk smack about anyone they can.

Someone repeatedly commented after Tokyo ‘Emma McKeon has never had any success in any of the 3 individual events she medaled in at Tokyo, that’s really suspicious’. She had literally won international medals in all 3.

The most amazing thing as posted in an article here had he swam his backstroke split from the heats he would’ve broken the record.

Marchand’s 4:04 swim had the surprise factor because it was just a massive time drop and then it was close to the Phelps WR, the last one Phelps still holds.

Marchand and that red WR line have a date with destiny.

I hate to say it, seeing how fast the swims at Worlds are, it sure looks like the Covid lockdown effected the times at the Olympics. Considering some of the best at the Olympics either didn’t compete (Emma) or left early (Dressel) from Worlds, it looks like as a whole, the sport has gotten faster since the Olympics. Remarkable

I think what affected times the most at the Olympics were the morning finals. See how slow that 400 IM final was.

I’m pretty sure the 400 IM world record time was also swum in the morning.

In a super suit

And this past year was far less interrupted from training and restrictions.
The fans also help a lot to swim fast

On the women’s side, there were only four events where the world’s winner was faster than Tokyo: Ledecky 800/1500, Walsh 200 IM and McIntosh 400 IM

Indeed- I think the men were faster and the women slower at the WCs….generally speaking.

Its tough cause theyre all absolutely phenomenal, incredible swims. Any of those performances removed from the others could have been the swim of the meet at tokyo or other recent major champs over the last decade.

So, not to take anything away from all the crazy good swims of the meet, I do think that 4:04 takes it by a hair cause it has so much going for it. Really unexpected rattle of a pretty much never grazed record.

IMO they all have grounds to argue why theyd take the crown. Hard to say, if they can be ranked its marginal