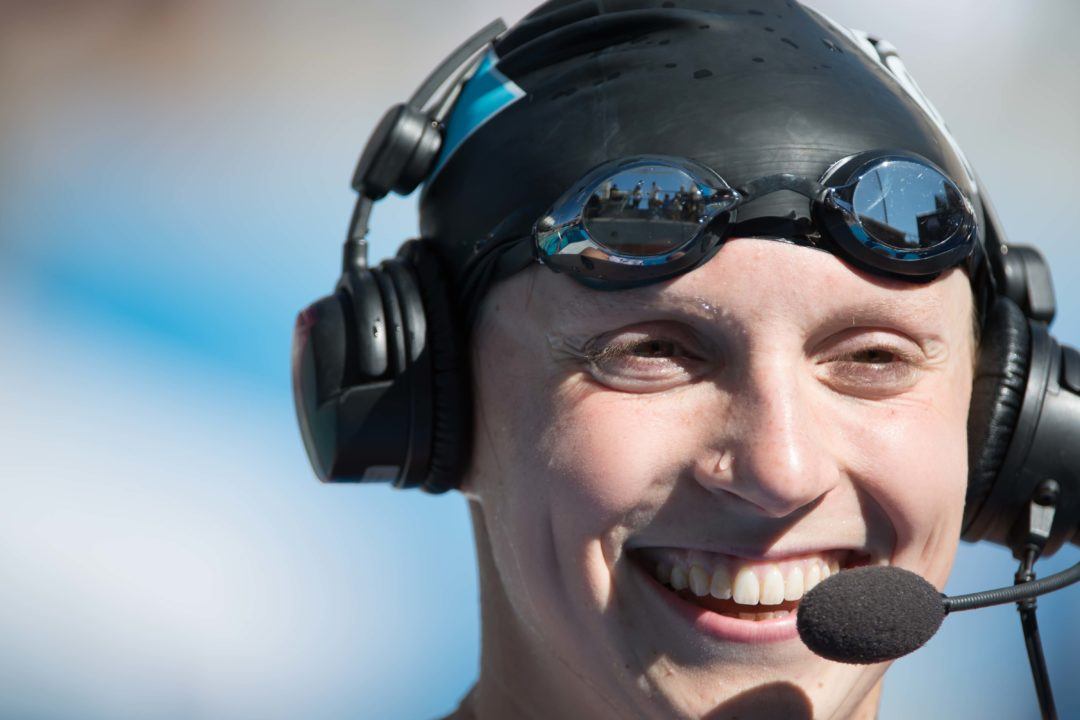 6 out of 10 voters in our most recent poll agree with Katie Ledecky's timing to turn pro after two collegiate seasons. Archive photo via Mike Lewis/Ola Vista Photography

Our most recent poll asked SwimSwam readers to weigh in on Katie Ledecky‘s decision to turn pro after two collegiate seasons:

Question: What do you think about Katie Ledecky‘s decision to turn pro after two NCAA seasons?

6 out of 10 voters in our most recent poll agree with Katie Ledecky‘s timing to turn pro after two collegiate seasons.

High-level swimmers competing both collegiately and in high school usually spur some of the most impassioned debates among SwimSwam readers, but it can be hard to quantify the voices on either side of the debate. While SwimSwam readership in general seems to be a very pro-NCAA crowd, just 12% of voters said Ledecky should have finished out her final two years, turning pro after the 2020 Olympics.

Ledecky now has two years leading up to the next Olympics in which to sign endorsements and train and compete as a pro. About a quarter of voters said she should have gone pro earlier – perhaps after a year of college swimming or perhaps turning pro before ever competing in the NCAA.

The money question is always a tricky one. While Ledecky is still young (21 as of last month) and should presumably have plenty of time left in her career to make money, the same was said of Missy Franklin, who was in a similar situation after two seasons at Cal. Franklin’s career has hit snags much earlier than anticipated, a sobering reminder that young phenoms don’t always stay dominant, particularly on the women’s side.

Below, vote in our new A3 Performance Poll, which asks voters for the most fun event to watch from a spectator’s perspective:

You are either committed to professional swimming or not. If you are, then do it immediately while you still have everything in your favor. Hit pro ASAP when you have the endorsement and popularity already at your back. You are only one injury or freak accident away from losing it all. Competing in college is for those not quite there yet and still improving on the international stage, or for those not interested in professional swimming. But if you want to make swimming truly your profession, then do it right and strike while you have your health and enthusiasm. Every year you wait, you risk burn out, etc.

I have to agree. Make your money while the going is hot, then you have college and the rest of your life ahead of you. Definitely an over simplification, but it could very will be a once in a lifetime opportunity.

And the other 40% must be independently wealthy.

I thought she would, as opposed to should, stay for one more year and then go pro. Such an option should have been included in the poll.

Katie Ledecky can do whatever she darn well wants to. I think she enjoyed college swimming, attending Stanford, made new friends with lots of fellow students that are not swimmers and all the other positives you get by going to college.

By going pro now, she got the best of both worlds. Best of luck to her, she’ll do just fine.

If only 10 people voted, I’m not sure you have a large enough sample.

Reinforcing the last paragaph, i think she should have only done one NCAA season,because it´s a hell of a great experience.
But since it´s clearly becoming very difficult to evolve and consequently stay motivated (she already achieved super women level), she has to take the most out of her status to make some money and have other experiences – pro athlete experiences

It would be great if college athletes could still get the money they’ve won and still maintain their amateur status. Maybe they couldn’t have access to it until they graduate, but it is there written on a check the day they graduate (like Arena PSS winnings).

Unfortunately, the NCAA rules were specifically for Football and Basketball, which pretty much ruined it for all the low profile sports that don’t have to worry about seedy agents or unscrupulous boosters.

Seems like 87.5% agree with her decision to turn pro before finishing college. 60% agree with the timing. Nitpicking the title of the article…

I agree on that. Basically no question of “should she have turned pro at some point before the end of her NCAA career” – just a matter of did she hang around too long?

Possibly. She should have turned pro immediately after Rio, while her reputation was red hot and the Games were still on everyone’s mind.

I like that she is training with Stanford and with other elite swimmers her age. I voted that she should’ve gone pro immediately because I think it worked well for Phelps and she is the most Phelps-esque in this generation. Although, if she went pro and didn’t change her training group, I’m not sure how she would have done. I’m not sure..just some thoughts.