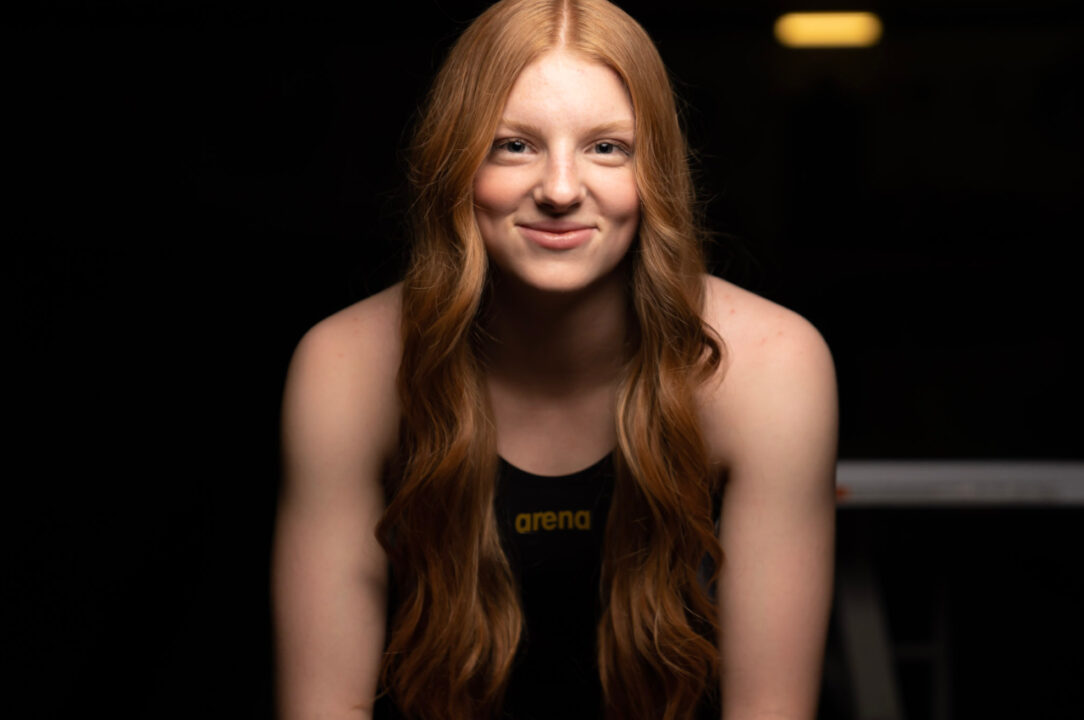 We cover Mid-season invites, the Finals picture for the ISL playoffs, and what Lydia Jacoby signing with Arena means for the high school swimming community Current photo via Mike Lewis/Ola Vista Photography

This week on the SwimSwam Breakdown, we cover the highlights from the first week of the NCAA Mid-season invites, the Finals picture after week 2 of the ISL playoffs, and what Lydia Jacoby signing with Arena means for the high school swimming community at large. See below for full list of topics:

College invites deserve there own article with some in depth analysis

Braden said that they were waiting til all Invites are done to do a comparison.

You got the ISL playoff stuff wrong re Toronto. You said Toronto’s best shot is winning their final match and London coming third to LA and Energy. That would still result in London beating them. They need to win their match, and have LA come third, not London. London currently has a 1st and a 2nd, while LA has a 1st and a 3rd. Both LA and London beat Toronto in a tiebreak.

Realistically, LA third and Toronto first is their only shot. But I absolutely do not see Toronto beating Cali unless Cali rests all their good swimmers, or even deliberately lets them win. Which is honestly a possibility but would be a crazy strategy call. Cali actually… Read more »

if anyone wants to see jacoby sing and make music, i got u

A question that really needs to be discussed: what will this ISL final actually look like? A lot of the times from playoffs are 2 or 3 or 5 seconds slower than the winning times for events at the last season final. Are we expecting there to be a big number of records broken like the last few seasons? Or should we expect that maybe this will be a much slower final than usual?

At this stage, Haughey and Dahlia basically look like the only two major players who are swimming faster than this time last year. And there are a huge contingent that are swimming markedly slower.

EDIT: Should probably add Shymanovich to that too. Sjostrom has been hit… Read more »

*His name is Dolphinovich and he‘s swimming fly not breast.

Please tell me you mention the fact that McKeon outsplit Dressel on the Mixed Medley Relay, 50.73 to 50.76 (obviously with McKeon swimming free and Dressel swimming fly).

I’m assuming you don’t, because if you did this comment section would be full of angry Dressel fans 😂😂.

While, as a Roar fan, it would be great if Dressel stayed at this level, I suspect he will still win a few events at the final. But seems doubtful he will be anywhere near his WR form from the first two finals.

I don’t think it’s it’s about McKeon out splitting Dressel it’s more like 50.76 is kind of very slow

This is idiotic. It’s like saying,”Peaty got outsplit by this woman and that woman and that woman….” Yes, you acknowledged that different strokes were involved, but precisely because different strokes were involved, respectable authors wouldn’t bring it up — and they didn’t. The guy was at no meets for 2 months, got a tattoo and arrived on Friday. Give the greatest swimmer in the world and holder of 9 WRs a break; he’ll dazzle again soon.

Tony is triggered and no one is surprised.

A male flyer should never get outsplit by a female freestyler. Ever. There’s a full 2.5 seconds between the male fly record and women’s free record.

Comparing it to breast, where the men’s record is slower than every other women’s stroke, is a terrible comparison. A great men’s breast split would literally always be beaten by women in the same race. But even average men’s fly split should never be beaten by a woman.

I was making the point that Emma’s split was fantastic (8th fastest of all time) and Caeleb’s split was terrible. I predicted Dressel fans would have a cry about it and you seem to have proven me right.

Have you ever seen Kamminga and Scozolli in the free relay ?

They’re on the B relay to fill a space lol. They’re not swimming their best stroke that hold a world record in.

My 2 cents for what it is worth;
Margo-Impressive weekend for Alabama for sure and kudos to her, her staff and the team. One meet or one season doesn’t make a good coach. But better than a really bad meet!

ASU-has SwimSwam ever asked what the objective or advantages of sitting out last year? I see none. The men had a great meet for sure and should be a player in March. The women were better before Bowman got there! I agree with Coleman that Nordin was swimming well enough last season to make the Olympic team but flopped.

UVA vs Stanford-Stanford was better than dual meets for sure. I just can’t doubt what Todd has done or… Read more »

Every girl in Tokyo won a medal? What do you mean? Phoebe Bacon, Ryan White, Katie Grimes may have something to say about that. Nonetheless, every woman on the US team but those three won at least one medal.

I think Ghost is referring to “every UVA woman,” but I could be wrong.

I think he means every woman from
Stanford won a medal, not every single American woman in Tokyo. Bacon, White and Grimes aren’t at Stanford.

Stanford LTBs?!?! Therefore you should know I didn’t mean them.

White won a medal for the 400 medley relay prelims.

It’s possible to make the case that Walsh could have swum better if she had taken a gap year.

Todd is a great coach and deserves a lot of credit for doing a nice job painting, but the house was built somewhere else.

I thought that it was an oversight that you talked about Alabama and UVA, but didn’t mention the depth and dominance of the Lady Vols. As a Vols fan I’m fine with them flying under the radar, but will love it when you are suprised at their success this season!