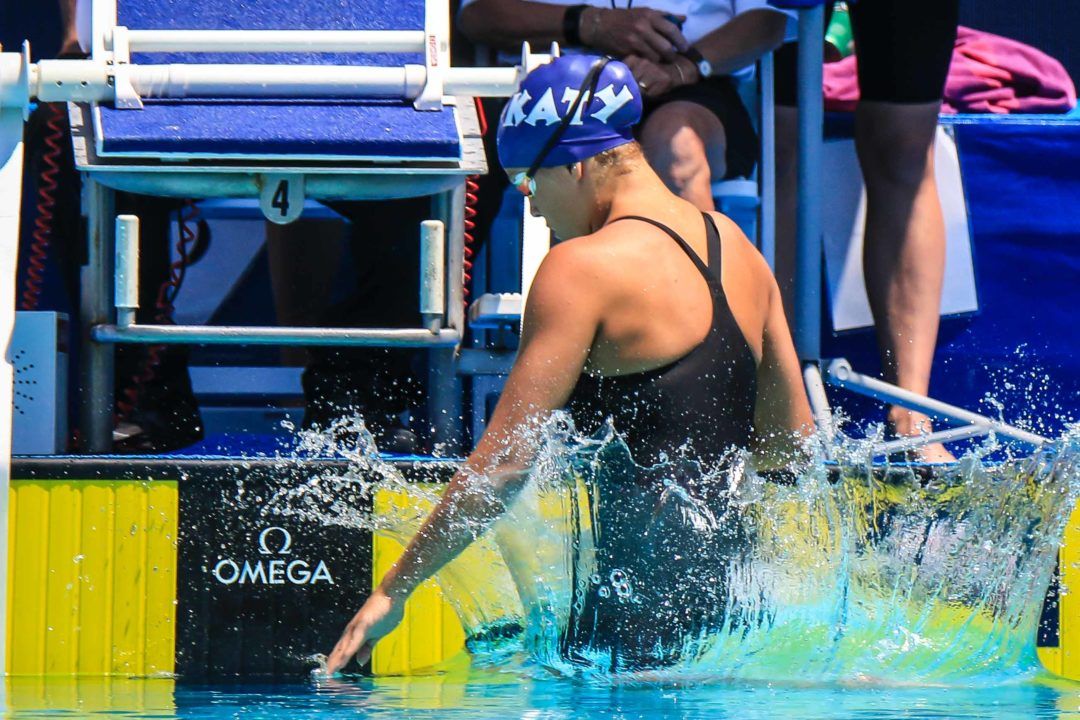 Emma Sticklen and Lillie Nordmann will go head-to-head in class 6A with the state title and state records on the line in the 100 fly. Archive photo via Jack Spitser/Spitser Photography

Texas runs its high school state championships this week in Austin at the University of Texas. We’ll briefly preview the teams & swimmers to watch in both divisions.

The top two finishers at each of Texas’s 8 regional meets qualify for state ‘automatically.’ They’re listed in the “automatic qualifiers” document below. The next 8 swimmers or relays in each event make the state meet as “call ups,” listed in those documents below.

A sophomore last year, Herceg finished second behind standout Kaitlynn Sims in the 500 free, but actually upset Sims for the 200 free title in a 5A state record 1:46.39. This year, Herceg comes in as the top seed in both distance freestyles, and has a chance to take over Sims’ mantle – and perhaps chase her 500 free record.

Junior Owens could put herself in the mix with Longi and Daspit in the 50 free, but her big event is going to be the 100 back, where she’s the top seed by 2.4 seconds. Her career-best of 53.72 would beat the current 5A state record of 54.13 set in 2015. With a drop, she could eventually challenge Lucie Nordmann’s overall state record of 52.48.

Georgetown dominated last year, winning the meet by 82 points and sweeping the free relays. But Furrer is the only returner who was on both of those relays last year. He had two thrillers individually: then a sophomore, Furrer won the 500 free by 0.15 seconds and was second in the 200 free by 0.01 seconds. He has a shot to sweep both this season, but the field looks equally tough. Furrer had an excellent Winter Juniors, though, and his new career-bests (1:37.85/4:26.42) could challenge 5A state records (1:37.19/4:25.71).

Last year’s 200 IM champ (1:49.89), Jones comes in seeded just third, but that isn’t to be taken too seriously – he cut about two seconds at state last year. Maybe more intriguing is Jones’ shot at a double. He was 3rd in the 500 free last year in 4:34.36, and returns as one of the chief threats to Furrer in that event, provided he has another big state meet drop.

Last year’s state runner-up in the 100 breast in 56.77, Hardt went 55.70 back in December at Winter Juniors. That time would challenge the 5A state record of 55.67 set in 2017. That record is under assault from all angles, though, as returning A finalists Mark Eberhard (56.18 this year) and Alex Lynch (56.24 this year) have both been fast this high school season.

A two-event champ last year as a junior, Sticklen has a shot at two state records in her senior campaign. Sticklen was 51.88 in the 100 fly last year to break the 6A and overall state records, besting Lillie Nordmann by two tenths. Both return for another showdown this week. Sticklen was also 53.01 to win the 100 back by a second and a half last year, coming within six tenths of a Lucie Nordmann state 6A and overall record.

The younger Nordmann, who is a senior, is the returning champ in the 200 free, where she’s chasing a state record that has stood since the super-suit era of 2009. Samantha Tucker was 1:44.64 that year; Nordmann was 1:45.55 at this meet a year ago. She comes in as the top seed by two seconds. Nordmann should also battle Sticklen for the 100 fly title and record – Nordmann was 52.08 for runner-up honors last year.

Last year, the junior Zenick swam the 50 free and 100 fly, but this year, she’ll avoid the Sticklen-Nordmann logjam in the fly by taking on the 100 free. Zenick has a shot at a sprint sweep as well as state records. She was 22.81 last year for second in the 50 free, behind 6A record-setter Emma Stephenson. Zenick went 22.40 in December, so watch for her to challenge both that record and the Texas overall record of 22.32 from Julia Cook. Zenick is also the top seed in the 100 free, and her lifetime-best 48.81 would rattle the state 6A (48.53) and overall (48.44) records.

Lowe won the 100 fly last year (48.18), but he’s got his sights on much bigger targets this year. First, he has a real shot to break the 6A and overall state records in that event – they’re set at 47.07, but Lowe went 47.09 at Winter Juniors in December. Lowe could also add a second title. He’s the fastest returner in the 50 free after going 20.20 last year.

Lowe’s biggest challenger in the 50 is probably Reno, the Clear Falls junior who doesn’t appear on last year’s state results. Reno went lifetime-bests of 20.38 and 45.07 in the sprints this high school season, making big drops in both, including from 47.7 in the 100 as of last fall. Though Jimmy Feigen’s state records (19.4/43.0) are a tough sell in those events, Reno could be looking at an out-of-nowhere sprint sweep.

Round Rock senior Ribeiro is the defending champ in the 200 IM after going 1:47.98 last year. He was 1:47.01 at Winter Juniors. Meanwhile Ribeiro was the runner-up in the 100 breast last year (55.76) behind a graduated senior, and his new career-best 55.66 should put him in the hunt there. Keep an eye out, though, for Mitchell Mason (54.78 at Winter Juniors), Jaden Luo (55.40 this high school season) and Alex Sanchez (54.83 at Winter Juniors), all returning A finalists who have been quicker this year.

These personal bests and potential outcomes look good on paper, but in reality there is another component that comes into play. It’s an Olympic year. So with Sectionals only 2 weeks away with having LCM finals, a lot of these swimmers will taper for that to make trial cuts instead of tapering for HS state. Others will be tapering for State, and others will say they’re not and then do so any way 🙂
So possible outcomes and results are anyone’s guess at this stage, exciting none the less!

I think juniors and sophomores looking to get SCY times for college coaches will approach this meet differently. I know what our kids are focused on, and it’s SCY times right now. If they don’t expect to final at trials, it’s not 100% worth it to focus on that meet and LCM times.

I don’t think the original comment was the difference between focusing on Trials vs. State. I think the comment was on people who are trying to get TRIALS CUTS in 2 weeks, versus state.

Every kid is different, but if you asked them all “would you rather jump from 14th to 9th at state, or qualify for the Olympic Trials,” I’d have to guess that at least half of the kids in that position would say Olympic Trials. Most of the swimmers who are vying for individual state titles probably already have Trials cuts. This could, however, impact the team battle.

Go Vincent! Go Dragons! This State feels like Round Rock Invitational. A lot of swimmers from Round Rock ISD.

PsychoSwimSon is listed. Not a favorite, just trying to help his 200 MR finish in top 3 with a sub 21 split, go under 57 in 100 breast and potentially A final and become Scholastic All-American with a Winter cut.

They would need to drop 2 seconds to win it, IMO. Hmm… I don’t know.

Either way, there should be at least 2 future Aggies fighting out for that 100 breast final. Add to that all the Aggies ladies in the breaststroke field, Aggie breaststroke looking good for the future.

Eric Stelmar is a huge one coming in, as well as Alex Sanchez. The 100 breast this year may be the fastest it has ever been, and the potential of multiple 54s in the event is extremely exciting. 6A state is unfortunately missing the top 2 2020 class members this year, as Coby Carrozza swims in SPC and David Johnston does not swim high school.

4
-2
Reply
Wethorn
Reply to  Will McKinney

What is SPC and why isn’t Coby swimming?

SPC is a different conference of high school swimming in the state of Texas, where with 2 exceptions (that had to sue for the right to compete in the UIL), private schools aren’t allowed at the public school state championships.

There are two separate private school leagues: one is TAPPS, which is easily the bigger of the two and includes most of the state’s private schools. The other is the SPC, which includes a group of 15 schools in Texas and 1 in Oklahoma (used to be 2 in Oklahoma) that fancy themselves as uber-elite and needing of a separate conference.