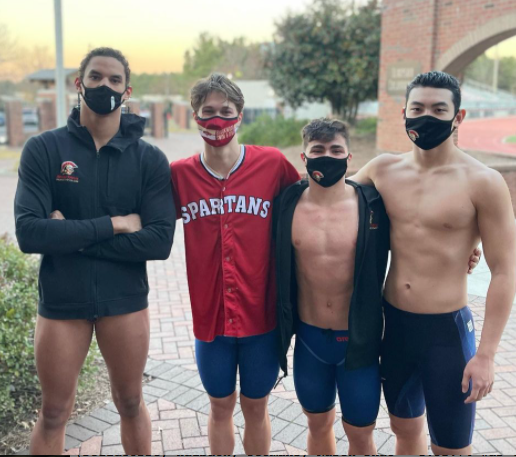 Nathaniel Stoffle, Preston Lin, Kamal Muhammad and Peter Sacca combined to break the 2015 NAG that was held by an NCAP team with some very familiar names. Stock photo via Karl Krug/Spartan Aquatics

Madisyn Cox and Melanie Margalis have both opted out of the 400 free B-final and will focus on the 100 breast A-final, where they are seeded 4th and 5th.

Peach State 18 and Under Championships

The Spartans Aquatic Club boys kicked off the Peach State 18 and Under Championships with a bang on Thursday evening, breaking the five-year-old National Age Group Record in both the 15-18 and 17-18 200 medley relay.

The quartet of Nathaniel Stoffle, Preston Lin, Kamal Muhammad and Peter Sacca combined for a time of 1:26.43, edging out the NAG of 1:26.47 set by Nation’s Capital Swim Club back in 2015. That all-star team consisted of John Shebat, Carsten Vissering, Andrew Seliskar and James Jones.

Stoffle is 18, while the other three Spartans swimmers are currently 17 years old. The NCAP team had a pair of 18-year-olds in Shebat and Seliskar, with Vissering and Jones both 17 when they set the record.

Note: USA Swimming’s 15-18 NAG relays document indicates that record belongs to the NCAP team made up of Jones, Seliskar, Grant Goddard and Shebat, which was actually the order of the NAG record-breaking 200 free relay. The results from that 2015 NCSA Spring Championship meet confirm the medley team was Shebat, Vissering, Seliskar and Jones.

The two teams were incredibly close on all four legs, with Stoffle out-splitting Shebat on the lead-off by .16 being the biggest difference-maker. Stoffle’s time of 21.71 was also a new lifetime best, taking down his 21.93 from the 2019 Winter Junior Nats – East (set one year ago tomorrow).

Spartans Aquatic Club was one of the first teams to hold a meet after the COVID-19 pandemic hit the United States, and have had some standout performers, highlighted by Sacca who registered 10 personal best times between two intrasquad meets in the summer.

Sacca followed that up by committing to Georgia, while Stoffle is committed to Auburn and Muhammad has verballed to Virginia.

Yessir! More good times to come from that meet!