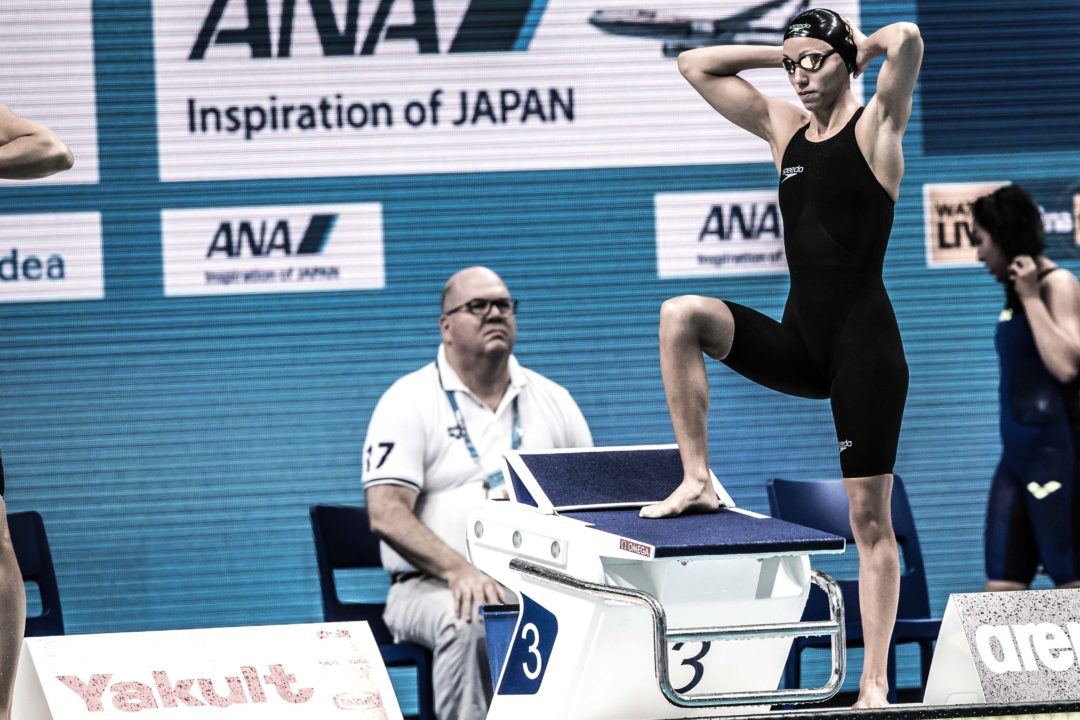 The European champion and World bronze has opened up about confinement, the good and hard times of her career and her plans for the future. Archive photo via Mike Lewis/Ola Vista Photography

Vall, 31, reached the international elite level in 2014 when she won the bronze medal in the 200-meter breaststroke at the long course European Championships in Berlin. The following year, during the 2015 World Championships, Vall claimed the bronze in the same event in a historic final tying for bronze with Rikke Moller Pedersen (DEN) and Shi Jinglin (CHN). In 2016, she would become a two-time semifinalist while racing at her first Olympic Games.

In 2017, she was won European gold during that year’s short-course edition, while in 2018 she wound up claiming silver at the Glasgow European Championship. After a tough 2019, Vall earned an Olympic berth for Tokyo 2020, which would be her second Games.

However, the postponement of the Olympics to 2021 due to the COVID-19 pandemic has left Spanish athletes in limbo. In this comprehensive interview, the breaststroker talks about confinement, the good and difficult times during her career and her plans for the future.

You didn’t take a break, you’ve been quite active on social media…

“Since we were confined, the intention was to replicate an average week’s training pace as much as possible… so as to not lose the habit.”

“There is a lot of yardage we cannot make up for, but we are now doing more complex exercises and I am already mastering the techniques, and although it is not the same, we will find something positive.”

Are you rediscovering yourself during confinement?

“On a personal scale, I am a very experienced swimmer, I know myself well, I know my body, and I have found aspects where I lacked in preparation, and which confinement has made me realize how important they are. When we return to normalcy, I will try to fit them into the plan.”

How are you coping with the fact that the Games will not take place this year?

“We were at the High-Performance Center in Sierra Nevada (Granada) rounding up the preparation for the cycle that would have ended in the Spanish Open Championship, where we had to ratify our Olympic qualification. We lived a little regardless of what was happening in the outside world – I was surprised by the news that came to me. The Open was canceled… and at the beginning, we were going to confine at the High-Performance Center in Sant Cugat, in Barcelona, but then they told us that we couldn’t, and instead of taking a plane back, so as not to catch the virus we got into vans and spent the whole night driving back. It all happened very fast – the first few days at home were very shocking. We were concerned about the Games because they were right around the corner, we couldn’t train, we had this anguish for the responsibility of having to train and not being able to do so. When the Games were postponed, the stress level dropped.”

Did the postponement alleviate in a way?

“Yes, on the one hand, yes because we lived in anguish, but I had planned in a way, and everything has gone to hell, but hey, after about 2 or 3 days to assimilate the situation, it was enough to face us again and want to go back to the top although not in a hurry.”

How are you planning for these next few years? Until when will we be able to see Jessica in action?

“My goal was not to retire after Tokyo 2020, but wait for one more year as I wanted to be a mom and did not know how I was going to face the competitive retirement process. It is a complicated situation, because in sports when you want to be a mom, there is a lot of difference between men and women. They [moms] are inactive for 9 months, and if you want to make a comeback, it must take certain months to do so in good shape. It was something that I was planning for 2021 and at the moment will move onto 2022.”

We’ve got Jessica at the top of her game, more so since you broke barriers at the Kazan 2015 World Championships…

“FINA recently aired the 200-meter breaststroke final from Kazan, it’s been a long time since I had seen that race. Now that I’ve seen it, I was far off the race, but I trusted myself. I did not believe it, the first thing I looked at was if the little light illuminated on my block, and I saw a 3. Then I saw that lane 4 also got third place. I saw many 3’s, and when they reordered the scoreboard I saw it was a triple tie for bronze. It was exciting, it was historic for swimming.”

Your career, unlike other swimmers, has almost been inverted. You prioritized your education, how did you manage studying and training, and how did you decide to do your career this way?

“It came as it did. Different situations make lead you to make certain decisions, and I think I was right because I have been happy during these years. One situation led to another. I gave priority to studies but did not stand out much in swimming. It made me happy, and I had high-performance swimming, I trained for many hours but I did not attend training camps. I had a tutor who helped me with the exams, and my classmates from the university took my notes and helped me a lot. I have been lucky to meet people who have made it a little easier for me.

My family was very supportive of me, when I finished my studies my family and husband told to me: ‘why don’t you try swimming for a year?’ And it was in 2013 when I got hooked on the national team. My first training camp was in Tenerife. It was very exciting and I had a great time. In 2013 there were many national teamers and it was a vicious cycle that led you to continue training. It wasn’t just the results and the medals. Everything fills you up to train and motivate you every day. Being comfortable and happy with people is the best.”

Every career has its downs. What have those been like and how have you overcome them?

“One of them was in 2016. I was not prepared for the medal in Kazan, and suddenly I found myself with an international medal under my belt. I was not prepared to carry that weight during an Olympic year. The Olympic year was an excess of responsibility, trying to give it my all, an excess of perfectionism, it never seemed good to me because I always believed that I could do better. In 2016 I reached two Olympic semifinals during my first Games. Now that I look back, in my first Games being 10th is not bad. But if I didn’t cry 48 hours, I didn’t cry at all.

The other aspect was in 2019. It was a very tough year on a personal level, due to very tough personal situations that I lived through. This affected everything including performance, so the Gwangju World Championships were very hard. I wanted to be there but I was not ready. But when you overcome it you get stronger. This season I had accepted and mentally managed certain situations, and was prepared to go all out, and still am.”

You’re part of a very strong training group, which also obliges you to not let your guard down…

“We are a 25-strong squad at Sant Andreu, and [Coach] Jordi Jou tells us that any of our goals is just as important, which relativizes the pressure and responsibility that may go along with doing something so that it is simply working with a goal. At the same time, having a part of my team that partakes at national team training camps, Joanllu Pons, Albert Escrits, Raúl Santiago, Africa Zamorano, Lidón Muñoz means that when we go to training camp, it is very similar to what we have at home, and that is important to us.”

You’re part of a very powerful breaststroke generation, which adds more value to your results. Who are your toughest rivals?

“There were two or three swimmers who stood out more. Yuliya Efimova and Lilly King were above the others. Then was the rest of us. We gave ourselves up for that third place or for having a lane to swim in the final. I think one rival I always see myself racing in the final is Britain’s Molly Renshaw. I’ve been with her since 2014, she’s always around. The Italians, who you always end up meeting with, are also there. Now Martina Carraro has taken a step forward and is a little bit above, but I think we can be at her level. I aim for all the rivals that are ahead of me.”

When did you find that you were made for breaststroke?

“At first, I was a freestyler, 200 butterflier and a 400 IMer. I was a little late in my physical development and felt comfortable racing these events. I was always fourth. In my junior days, a coach told me that I good at the IM events, but I particularly swam breaststroke well. At the junior stage I had a hard time improving in long distance. You have to be patient when your body is changing. At that time I changed my stroke, I was improving in breaststroke and I was making finals, and I was not improving in the rest.”

What would you like to dedicate more time to should you have that extra cushion?

“To family and friends. The day I stop swimming will most likely be for that reason. All the people around me, my family, parents, friends, my husband. In the end, everything revolves around you, and I would like to give this support back in return.”

Do you see yourself doing something related to sport?

“Yes, I have considered it, especially in my final stage since I do not want to stop swimming all of a sudden. I want to take a year to accompany children and teach them everything that swimming has taught me, so I will feel at peace with myself. I want to, but I still don’t know when.”

The full interview can be accessed via the video below: