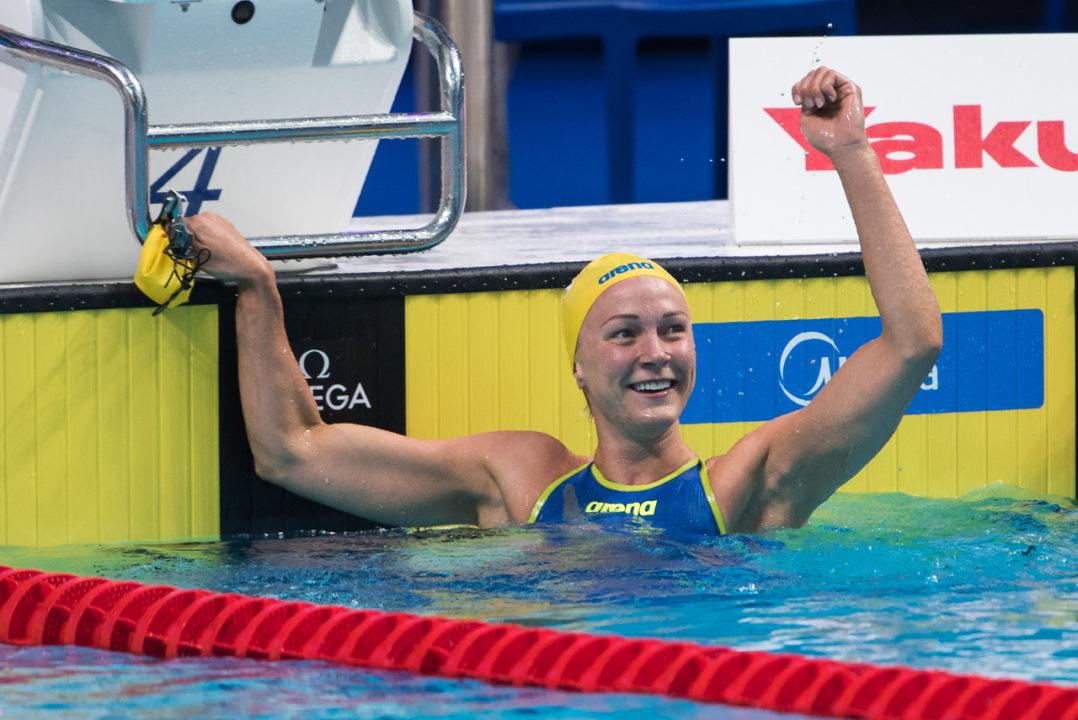 The race for the women's point lead at the 2017 World Cup in Hong Kong is getting interesting, with leader Sarah Sjostrom and defending champ Katinka Hosszu each winning three events on day 1. Archive photo via Peter Sukenik/www.petersukenik.com

The race for the women’s point lead at the 2017 World Cup in Hong Kong is getting interesting, with leader Sarah Sjostrom and defending champ Katinka Hosszu each winning three events on day 1.

So far, Sjostrom and Hosszu are perfect 3-for-3s. If that trend keeps up tomorrow, it’ll come down to performance bonuses (who has the highest FINA point-scoring swim) to decide the early lead on the tour, unless someone breaks a world record.

Sjostrom, who’s sworn off the 200 free in long course, swam 1:51.77 to cruise to a second-and-a-half win on Saturday over Femke Heemskerk. The result, primarily built into the last 50, was more than a second slower than her World Record done in Eindhoven in August. Sjostrom won again, with even less of a challenge, in the 100 fly (55.32). She came back later to take the 50 free in 23.42. World Record holder, Ranomi Kromowidjojo, took 2nd in 24.12.

Sjostrom currently holds a 90-point lead over Hosszu, but both rolled up 36 points already today, and performance bonuses could count for up to 24.

On the men’s side, Chad le Clos leads the points over Vladimir Morozov and Kirill Prigoda.

The Russian Morozov won the 100 free in 45.91, beating out le Clos’ 46.10. After swimming a lifetime best earlier this season in Berlin (45.23 – World Cup record), Morozov now joins Le Clos as the only swimmer under 46 twice so far this fall.

Le Clos also got beat in the 200 fly. That first win for the Americans went to Tom Shields in 1:49.62. The South African le Clos, who tends to have more stamina over 200 meters than does Shields, made up almost half-a-second on the final 50, but Shields had built a huge margin by that point and had plenty left to win the race.

Sjostrom tried to rest during the 100IM to be able to swim big in the 50fly, but that still wasn’t enough for the best performance.

As for Hosszu and Sjostrom: Both can’t get to 6 out of 6 as the two will meet in the 100IM finals tomorrow. If Hosszu wins that she can shrink Sarah’s lead somewhat.

Sarah has by far the best FINA score after day 1 though so she would still extend her World Cup lead.

Katinka narrowly got over 900 FINA points on day 1 so it’s a bit of a question how good her form is. Maybe she will be stronger in the 100s, she was on good pace in the 200 back about halfways. As a matter of fact Heemskerk and Atkinson are both ahead after day 1 so she needs a better time tomorrow to even get any extra points. Sarah on the other hand got a respectable 977 for her 50 free, and was over 970 on her 200 free aswell. But of course, we saw many scores over 1000(aka… Read more »

Never understood this point system. What is a better performance than winning 50 back, 200 IM and 200 back within an hour? Can hardly imagine anyone else to do that or a similar feat.

It’s a great achievement, but how can you measure it? The point system based on times is exact and easily measured, so imho good. With today’s program Katinka should be able to swim some better perf finals. She has far more time between the events. She is a favourite in all her events but will be pushed by Seebohm and Sjostrom in the 100s, so perhaps we will see some great times. I don’t think that she is in the form that is needed to retake the 400IM WR though. I expect that Sarah holds onto the first spot in the perf list but Katinka takes the 2nd.

No this is not exact. Depands on the previous WRs. But there were some that was undreameble, unthinkable, and unimaginable. E.g. I’m a girl who is swimming 200 back, or I’m a guy who is swimming 200 free. Or there was Ye Shiwen’s WR. Think about it.

My point is that this is the best system what they can use. What would you do? Who would tell which WR is better and by what margin? Instead of bashing of the system propose a better one please.

Everybody can tell wich WR is better (we have been talking about that for years), there’s less possibility to swim it in the near future. The margin is not so easy. You could use a multiplier for harder ones (in point system 1000 for the “easier” ones and 1… for the harder ones).
But IMO the most important would be that at the end of the special race FINA immediately or in very short time ratificates the new WR’s and corrects the points. E.g. Kristóf Milák swam “new” junior records in Indianapolis, but he swam better times in Netanya at the end of June.

Attila, never mind. There are 3 girls on the Globe, one is the best on 400-1500 free, the second is 50-100 fly and free, the third is all the IM’s and some backs.
What will be happen in this year’s SC Eurpeans? Sarah and Katinka together can win 12 golds, but at least will win 10 ( and two minor medals) for sure. Only the breasts for the others. That’s the case.

Could not agree more. Hard to argue that not these three ladies are the best swimmers on the planet.

Well, what about FINA scores now?
Hosszu just swam 984 in the 100 medley.
Sjostrom swam 971 in the 50 fly.
Katinka’s 984 is the best score so far and it’s likely will remain the best unless Hosszu herself beats it in the 400IM.

Katinka will edge closer to Sarah for sure.

With 9 points. But it doesn’t mean anything in the question that the present point system isn’t exact and correct.

I know! I’m so happy for Shields.

Wow he actually won something for once.