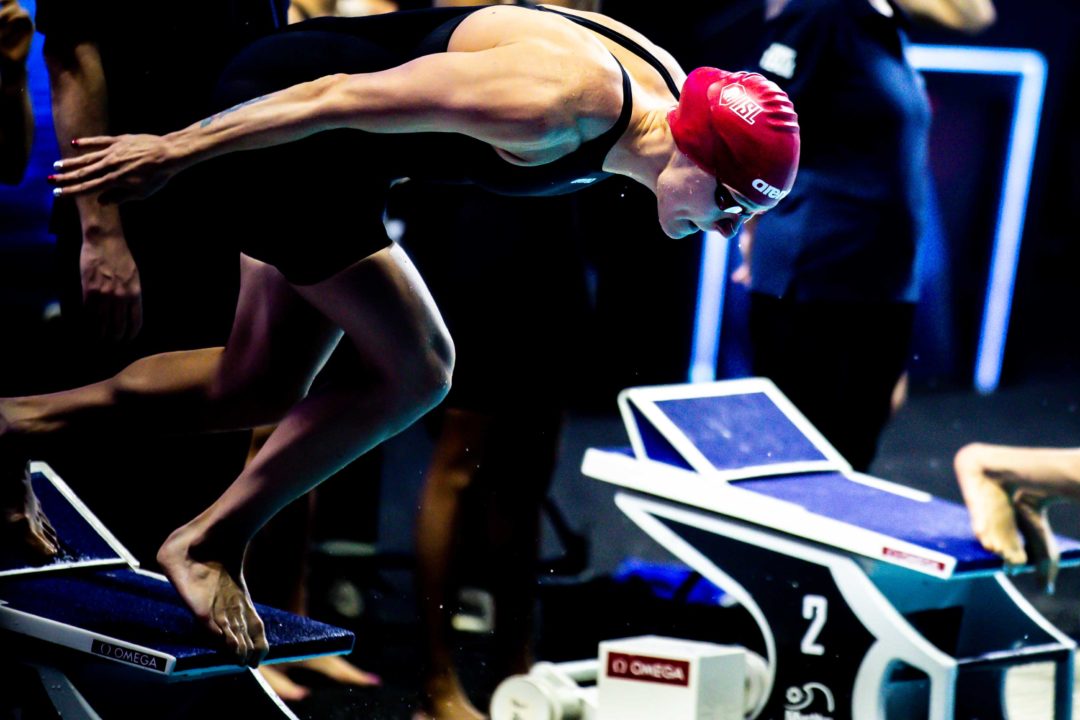 The Czech swimmer notched a morning swim of 4:17.71 to sit 5th headed into tonight’s final, but the teen proved she wanted the gold, surging up 4 spots to land atop the podium.

Behind her was Italy’s young Giorgia Romei, the 800m freestyle silver medalist from earlier in the meet, while Belgian Lotte Goris rounded out the top 3 in 4:13.58.

Seemanova finished 13th in this event in Gwangju, wrangling up a prelim time of 4:09.73 at the 2019 World Championships. For Romei, the youngster placed 2nd at her nation’s Championships in April of 2029, clocking a lifetime best there of 4:08.30.

Of note, French freestyle ace Charlotte Bonnet led the women’s heats with a morning swim of 4:15.80 but scratched the final.

Following identical podiums in the men’s 800m and 1500m freestyle events here in Luxembourg, which saw Ukrainian Mykhailo Romanchuk, British swimmer Daniel Jervis and Czech star Jan Micka finish 1-2-3 in each, this 400m free final was shaken up by a Frenchman.

Entering the mix to bump Micka off the bronze medal step was Logan Fontaine, with the 20-year-old notching a 3rd place time of 3:51.03 in this 400m free to collect his first piece of hardware here. His time is within striking distance of his PB of 3:50.00, a time he punched at the 2018 French Championships.

Earning his 3rd gold here, however, was indeed Romanchuk, with the Energy Standard athlete logging a time of 3:50.24 to finish just over half a second ahead of his silver medal partner Jervis who touched in 3:50.76.

In this race tonight, Micka was out of the medal contenders, settling for 4th in 3:52.72 after his 2 previous bronze medal performances.

Serbian Olympian Velimir Stjepanovic was in the race, although it appeared he was gunning for a 200m freestyle split. He stopped the clock at 1:46.99 at the 200m mark, proving he can get under the 1:47.02 FINA ‘A’ cut needed for this summer’s Olympic Games.

Getting her hand on the wall at the same time as Danish swimmer Matilde Schroder was British age group standout Kayla Van Der Merwe. Both women touched in a winning effort of 1:08.59 to edge out the next-closest swimmer, Anna Elendt of Germany, who touched just .14 later in 1:08.73.

17-year-old Van Der Merwe had already reaped 200m breast silver here in Luxembourg after taking the B-Final gold in the 50m breast. The Winchester Penguin has been making major strides in all breaststroke events, taking bronze in the 200m at last year’s European Junior Championships and gold in this event there in Kazan.

It was an Italian sweep of the podium in this men’s 100m breaststroke, with speedy Nicolo Martinenghi doubling up on his 50m breast win from last night with a victory here.

Registering the only sub-1:00 time of the night, 20-year-old Martinenghi got the job done in 59.96, holding off teammates Federico Poggio and Fabio Scozzoli, who finished with the respective silver and bronze medal slots with times of 1:00.62 and 1:00.82.

Martinenghi’s sub-minute effort ranks just outside the top 10 performers’ list for races since September 2019. Arno Kamminga of the Netherlands leads the world with his 58.61 notched at the FINA Champions Series in Shenzhen on January 14th.

Although she finished off the podium in 4th place in the 50m back after having taken the 100m back gold here in Luxembourg, Ukrainian Daryna Zevina bounced back with another win to cap off her meet.

She established herself as the top-seeded swimmer in this 200m back with a morning heats swim of 2:11.60 to snag the pole position by well over 3 seconds.

This evening, the 25-year-old nabbed gold in 2:09.85, again winning by a sizeable margin over runner-up Honey Osrin of Great Britain. Zevina’s outing overtook her own previous meet record mark of 2:09.95 she put on the books 4 years ago.

Osrin claimed 200m back silver at the 2019 European Junior Championships, punching a personal-best mark of 2:10.30. Tonight, she hit the wall in 2:13.50, just .02 ahead of a pair of swimmers who tied for bronze. Those swimmers were Eszter Szabo-Feltothy of Hungary and Jenny Mensing of Germany.

Yohan N’Doye Brouard already took 50m back gold and 100m back silver here in Luxembourg and the Frenchman wasn’t done with his hardware-seeking campaign.

Brouard snagged up the gold in this 200m back, hitting the wall in 1:58.04 to score a new meet record. His time surpassed the previous meet standard of 1:59.63 from Italy’s Christopher Ciccarese back in 2017.

Ciccarese took silver tonight in 1:59.42 to also up his speed from that previous meet mark, while Great Britain’s Brodie Williams also landed on the podium in 1:59.58 for bronze.

Hungarian Olympic champion Katinka Hosszu scratched all of her events today, save this 200m IM, which meant she dropped the 100m breast, 400m free, 200m back and 100m free.

Whether the Iron Lady was building up for something special in her signature 200m IM event, she wanted to simply back off her packed schedule, or she is ill, Hosszu made just one final appearance this evening.

The usual sub-2:10 200m IMer punched a time of just 2:11.32 tonight. Hosszu might have just put down the minimum effort, however, as the 30-year-old Hungarian still beat the field by well over 2 seconds en route to taking the top prize.

Czech swimmer Kristyna Horska earned the silver in 2:13.88, while Germany’s teen Zoe Vogelmann was next with a time of 2:14.31 for bronze. Vogelmann is the reigning European Junior Champion in this event, topping the Kazan podium last year in a time of 2:13.78.

The fastest time of the day in this men’s 200m IM came from Swiss standout Jeremy Desplanches in the morning heats. The 25-year-old World Championships silver medalist in this event notched a top morning swim of 1:57.59 to represent the only athlete to clock a time under 2:01.

Desplanches’ time earned a new meet record, overtaking the previous mark of Laszlo Cseh that sat at 1:59.01 for the past 4 years.

Flash forward to tonight and Desplanches opted out of the final, having cleared the 1:59.67 FINA ‘A’ cut by a mile.

Taking the top spot for gold instead was Germany’s Philip Heintz, the man who took the 100m fly gold last night. Heintz ripped a time of 1:58.92, well off his mark of 1:56.86 that rendered him 4th in Gwangju, but enough to notch the only time under 2:02 in this final.

World rankings-wise, Desplanches moves up one spot to now tie American Carson Foster as the 5th fastest performer in the world since September 2019. The Swiss man’s time tonight shaved .07 off of his previous season-best of 1:57.66 cleared at the FINA Champions Series in Beijing last week.

Virtually every time Swedish Olympian Sarah Sjostrom dives into the water she produces something special and tonight was no different. Taking on this women’s 100m freestyle in style, the 26-year-old sprint ace busted out a time of 53.02 to beat the field by over 2 seconds.

Splitting 25.15/27.87, Sjostrom clocked her fastest time of the season, as well as the 2nd quickest mark in the world since September 2019. This was after Sjostrom took on the 50m back/100m fly/50m free triple last night, which rendered silver in the former and gold in the latter events.

Bonnet put up a prelims swim of 54.45 before scratching this final as well.

Doubling up on his 200m free victory here in Luxembourg, 26-year-old veteran Velimir Stjepanovic of Serbia got it done for gold in the 100m free as well.

Clocking a time of 48.59, Stjepanovic came within .09 of his own meet record of 48.50 logged at the 2016 edition of this meet. In fact, Stjepanovic’s effort tonight ties the 2nd fastest of his prolific career and represents his quickest since 2016.

Runner-up went to Italy’s young gun Thomas Ceccon, with the versatile 18-year-old posting the 2nd fastest time of his career of 48.98. Ceccon’s time tonight represents just his 2nd venture into the sub-49-second territory, owning a personal best of 48.87 from the Italian Championships in April of 2019.

Manaudou is now the 8th fastest swimmer in the world since September, while Stjepanovic now ranks ahead of him in slot #7.

Collectively hitting a time of 3:49.74, splits included the following:

Nice article, thanks. Believe it was Women’s 100 free though, not 200 in that section

Time of Sjostrom in the list of 5 top swimmers has to be corrected as well.

Sjostrom and Manaudou looking sharp after their training camp.

Yes definitely. Sounds like Sjostrom had very much a two-year plan going into last year. She was alright at the Worlds but apart from that it was a kind of a disappointing year. She might reap the rewards this year instead for the work she’s put in.

Shocked by Manaudou’s time. Never expected he would even try again a 100-meter race in the big pool.

Good weekend for Brouard. The guy is programmed for Paris 2024 to be a gold medal contender in the 100 back but I wouldn’t be surprised if he goes 52 this year and makes the final in Tokyo.

French 4×100 would have been a big medal factor if they had Mehdy… Mignon, Manaudou, Metella, Grousset, Stravius would be capable of going fast… No Metella might just kill their chances?

To be fair looking at the squad above then they still have 4 guys who could pull together a medal winning performance.

Not sure, all four will have to swim lights out in heats then back up. Doesn’t make it any easier.

Without Metella it’s game over for a medal.
And to make the final we’ll have to put our 4 best guys in prelims.