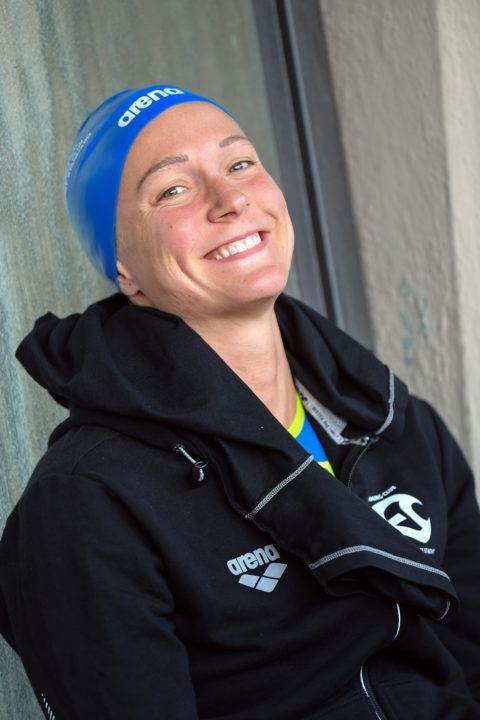 On the penultimate night the the 2019 Swim Open Stockholm, Sweden's own Olympic champion Sarah Sjostrom thrilled spectators with a big-time winning 50m freestyle time of 23.91. Archive photo via Arena

Margo Geer and Ting Wen Quah were quicker on the mixed free than they were on the women’s free relay as the DC Trident defeated the Cali Condors in 3:17.60.

On the penultimate night the the 2019 Swim Open Stockholm, Sweden’s own Olympic champion Sarah Sjostrom thrilled spectators with a big-time winning 50m freestyle time of 23.91.

Sjostrom paved the way to her big swim with a morning mark of 24.25, just off the 24.11 she threw down last weekend at the Bergen Swim Festival.

Tonight, however, the 25-year-old World Record holder dipped under 24 seconds with her 23.91 to further separate herself from the rest of the world in this event heading into this summer’s World Championships. As fast as she was tonight, Sjostrom’s meet record of 23.83 from last year remains.

We’ll see how rival Cate Campbell responds at the Australian World Trials, which take place in June. So far C1 has produced a time of 24.30 at the Aussie Nationals in South Australia.

Sjostrom’s time tonight inserts itself as the 18th fastest performance in history.

Finishing behind Sjostrom was teammate Michelle Coleman who hit 24.79, a World Championships-worthy time in itself, dipping under the 25.02 FINA A standard. Her performance is the first outing ever under 25-seconds for the-25-year-old, who is now ranked 14th in the world.