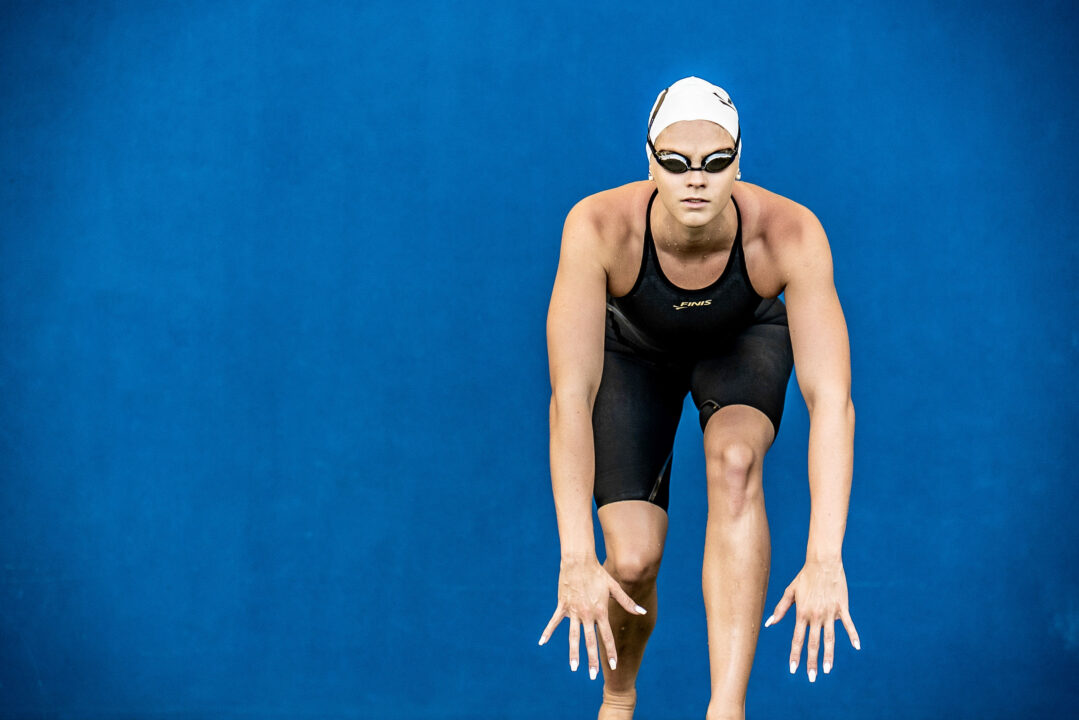 Back to racing after her doping suspension, Aussie Shayna Jack is wasting no time putting her name back on the sprint freestyle map. Archive photo via FINIS

Big-time talent was in the water on day one of the 2022 New South Wales State Open Championships, with Olympic gold medalists Ariarne Titmus, Kaylee McKeown and Elijah Winnington among them.

For multi-faceted talent McKeown, the 21-year-old already got off to a flying start this calendar year, busting out a monster 2:04.64 in the 200m backstroke at last month’s Victorian Open.

The Griffith swimmer took on the same event here in Sydney, producing another stellar time of 2:05.85. Beautifully splitting 1:02.62/1:03.23, McKeown beat the field by over 5 seconds, with the next closest competitor,17-year-old Mollie O’Callaghan, posting a time of 2:10.91 as the runner-up.

For McKeown, her 2:05.85 tonight checks in as the Tokyo gold medalists’ 11th fastest performance of her young career.

As for Titmus, the reigning 400m freestyle gold medalist raced the much shorter 100m free to kick off her campaign here. The Dean Boxall-trained star fell short of the podium, however, placing 4th with a mark of 54.53.

Reaping gold was Shayna Jack, also of St. Peters Western and training under Boxall. Jack ripped a winning effort of 53.13 to defeat the aforementioned runner-up tonight O’Callaghan, as well as two-time Olympian Madi Wilson. O’Callaghan clocked 53.67 while Wilson was only .01 behind in 53.68.

Jack’s outing here represents a new lifetime best, shaving .05 off her previous PB of 53.18 she registered back in 2019 before she tested positive for Ligandrol and was forced out of that year’s World Championships. She has just returned to racing last December and has been racking up the meters, including at the Queensland Championships where she neared her career-quickest in the sprint freestyle events.

Splits for Jack’s performance tonight included 25.69/27.44 to top the podium and put her hat in the ring for someone to beat for 2022 Budapest World Championships roster spots in this event, as well as relays. Jack remains as Australia’s 8th fastest woman all-time in this 100m free.

Bit harsh on the Mens 100m free, both boys are around where Caeleb is at the moment.

I wonder why he would do that to himself ? He’s a 47 second swimmer at his best

Great swims all round in what for most is a training meet, Kaylee strolled to a 2.05 as well

Absolutely. Jack went a PB and Mollie was half a second off her Tokyo time. Kaylee and Ariarne both would have medaled in Tokyo with their times too. Chelsea was only 0.4 of Jacoby’s time on the same day.

If none of the swimmers were tapered then things are looking good so far.

Ok, Titmus redeemed herself with an 8:18

Redeemed herself? What do you mean?

Agreed. Mollie only half a second off her PB (which is better than Jack’s PB and Mollie a lot younger).

Aussie women just swam the 3 fastest times of the year in the one race. Although we will be missing 3/4 of our world record relay at worlds, I think we’re still in with a chance for gold.

I agree great depth. But watch out for the Americans, some strong quick young-uns coming thru, in Walsh, Curan & Huske.

Indeed, and after a long break