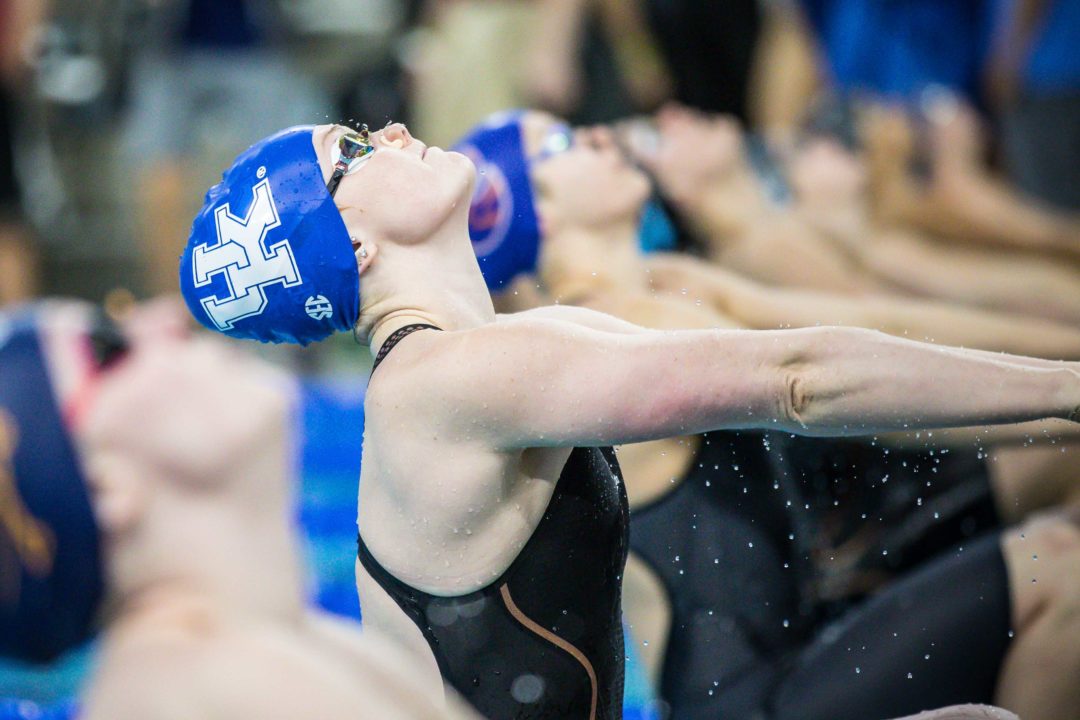 After day 4 prelims, Kentucky devoured Florida's 8 point lead and built their own 135 point lead over the Gators. Let's see how the finals may play out. Archive photo via Jack Spitser/Spitser Photography

Going into the finals session of Day 4, let’s look back on where the teams stood going into this morning’s prelims session. Florida actually outscored Kentucky through Day 3 by 8 points. The gap between 2nd and 3rd place had widened, leaving Georgia and Alabama to a tight race points-wise.

Kentucky earned a total of 17 scoring spots in finals tonight, including 9 in the ‘A’ final. Florida, currently 2nd in team standings, has 9 finalists tonight with 3 swimmers in ‘A’ finals.

Florida’s 8 point lead was devoured by a 2-3 Kentucky finish in the 200 back by Sophie Sorenson and Caitlin Brooks, among other swims this morning.

Florida and Kentucky have one swimmer each in the 100 free ‘A’ final. In the 200 breast, the Wildcats have 3 swimmers in the ‘A’ final including 3rd seed Gillian Davey.

Kentucky scored another top 3 spot in finals tonight in the 200 fly with 2nd seed Izzy Gati who is half-a-second behind Georgia’s Dakota Luther. Florida’s Amanda Ray and Kentucky’s Riley Gaines are also in the mix to score major ‘A’ final points.

Looking solely at day 4’s prelims session, Kentucky outscored Georgia handily. Their biggest victory was in the 200 back with a total of 7 swimmers qualifying for finals. That is nearly half of the total amount of Wildcats who made finals tonight. Close behind is the 200 breast.

Georgia and Alabama, while in 3rd  and 4th place in team standings, are set up to score significant points tonight as well with 13 and 12 swimmers in the finals, respectively.

Kentucky has built a substantial and potentially insurmountable lead thus far, totaling 135 points over Florida. If they hold their lead tonight this will be their first-ever SEC Championship title. Florida and Georgia, separated by 28 points, may have a battle for 2nd place tonight.

Florida’s only chance at catching up is in the mile. There, Kentucky’s Beth McNeese is the #3 seed, but their next-highest seed is freshman Kaylee Williams at 20th.

The Wildcats have 4 entries in the mile, while Florida has a whopping 8 swimmers scheduled to swim the race tonight. 5 of those are seeded in the top 16, while the other 3 are seeded with “no times.” The Gators would really have to go wild in that mile to make this a competitive meet – namely something akin to putting all 8 swimmers in the top 16 – but that’s their one plausible path back into this meet.

We should know, by the end of that mile, whether Kentucky is in a runaway, or whether it’s going to be a battle to the end.

UGA doesn’t have any scoring divers?

Orthodontist in Kentucky will be working overtime if the Kats win

What on earth has happened to auburn since last year

AU shore aint what it used ta be – welcome to the SEC Coach Taylor.

Three girls that would have been big scorers transferred/quit in the last year, on top of them not really replacing their crucial senior sprinters.

Thank you Andre for running the numbers and providing clarity. Looks like a historic day for UK and the SEC swimming and diving record book.

I never thought this would happen in my lifetime. This group of Wildcats can do what was thought of as the unthinkable… congratulations!

So what’s Florida’s diving like today? Would it be enough to overcome UK? Seems diving has been good for them so far but they might need today to be otherworldly.

Women’s diving is already done. Live results show them out of order, but platform was yesterday.

So why no include them in this up/down? Or were the points already in totals?

The points are already in the totals.

If Florida are going to win this meet, which is unlikely at this point, the way the come back is the mile. They have 8 swimmers entered there with 5 seeded to score, and 3 no times. That’s a large enough volume of swimmers that if they all go completely nuts, Florida isn’t mathematically eliminated. But realistically barring DQs, Kentucky has this wrapped up.

Let’s make the following assumptions about the 1650. 1. McNeese, Kentucky’s swimmer in the final gets 8th, moving down 5 places. 2. Florida’s 2 in the final sweep.3. Taylor Ault (who has the top time right now) ends up 3rd. This is essentially a best case scenario for Florida

That would be Florida 128, Kentucky 35. A difference of 83 points. The current projected margin is 135. So Florida would have 52 more points to make up. Making up 52 points with swimmers locked into their A/B/C finals isn’t a realistic scenario (too many things have to go wrong), and the difference between first and last in the relay is 34 points. So the only real… Read more »

Florida is really hurting without their best distance swimmer, Leah Braswell, who was the mile champ last year. UF has been in this situation before. They won NCAAs by 2.5 points over Stanford by outperforming every single one of their seeds in finals. I would LOVE to see it happen, but momentum is on Kentucky’s side. Florida will be a much stronger team next year.

Not arguing the points, but the Florida distance girls did a great job in the mile.

Diving is done, and it won’t be enough for Florida to overcome Kentucky, but Brian Gillooly has his first-ever SEC champion in Ashley McCool, who should be named SEC Diver of the Year after winning the 1m and being the only one who finished top 3 in the 3m to get into the platform final. If he can convince her to use that extra year of eligibility, it could make a huge difference next year when Florida gets some major additions that will keep them from having to spread some of their relays so thin. Hats off to Kentucky though, Lars is a fantastic coach, and I’ve been saying that for almost a decade now since his alma mater Tennessee… Read more »