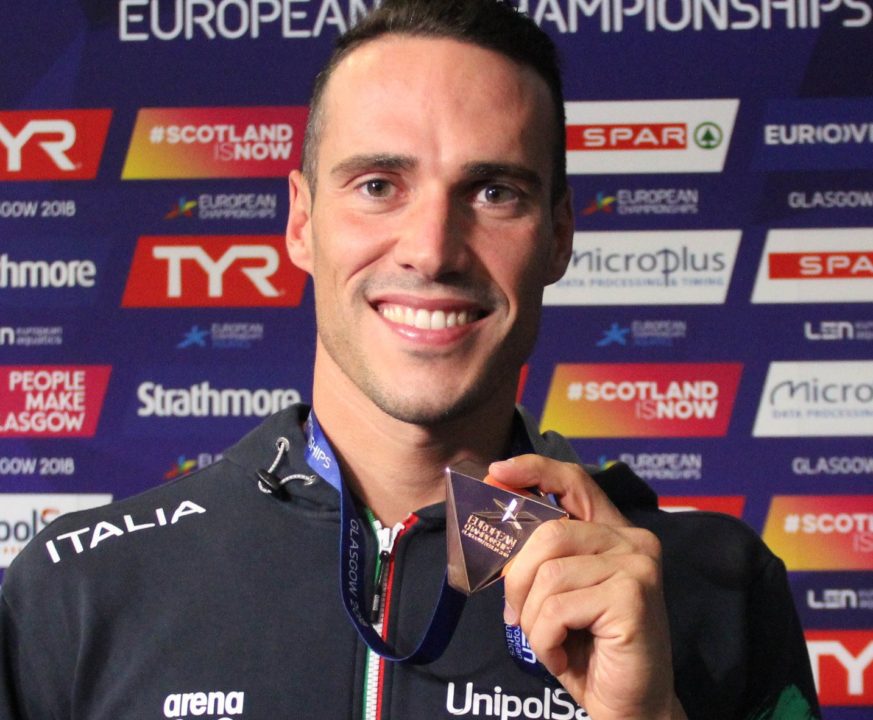 On the heels of both Italian swimmer Santo Condorelli and German ace Philip Heintz having been added to the ISL Aqua Centurions squad, breaststroking powerhouse Fabio Scozzoli has also been named to the Federica Pellegrini-captained team. Archive photo via Giusy Cisale

On the heels of both Italian swimmer Santo Condorelli and German ace Philip Heintz having been added to the ISL Aqua Centurions squad, breaststroking powerhouse Fabio Scozzoli has also been named to the Federica Pellegrini-captained team.

30-year-old Scozzoli took 50m breaststroke gold at the 2017 European Short Course Championships and followed that up with silver in the same event at last year’s Long Course European Championships. At the former, his time of 25.62 beat both Russian Kirill Prigoda and Brit Adam Peaty, while also representing a new Italian National and European Continental Record.

Most recently at this year’s Italian Absolute Championships, Scozzoli won the men’s 50m and 100m breast, beating out young domestic rival and World Junior Record holder Nicolo Martinenghi in the process. Scozzoli will be swimming both individual events, as well as the 4x100m medley relay, at this summer’s World Championships in Gwangju, Korea.

THE BEST TIMES OF SCOZZOLI

I hope underwater cameras will start being utilized by referees during races and post-races in the ISL. I’ve seen this guy doing illegal dolphin kicks off his start too many times.

Vote Up1-4Vote Down Reply
Who

There’s a long list of people that fit that description.