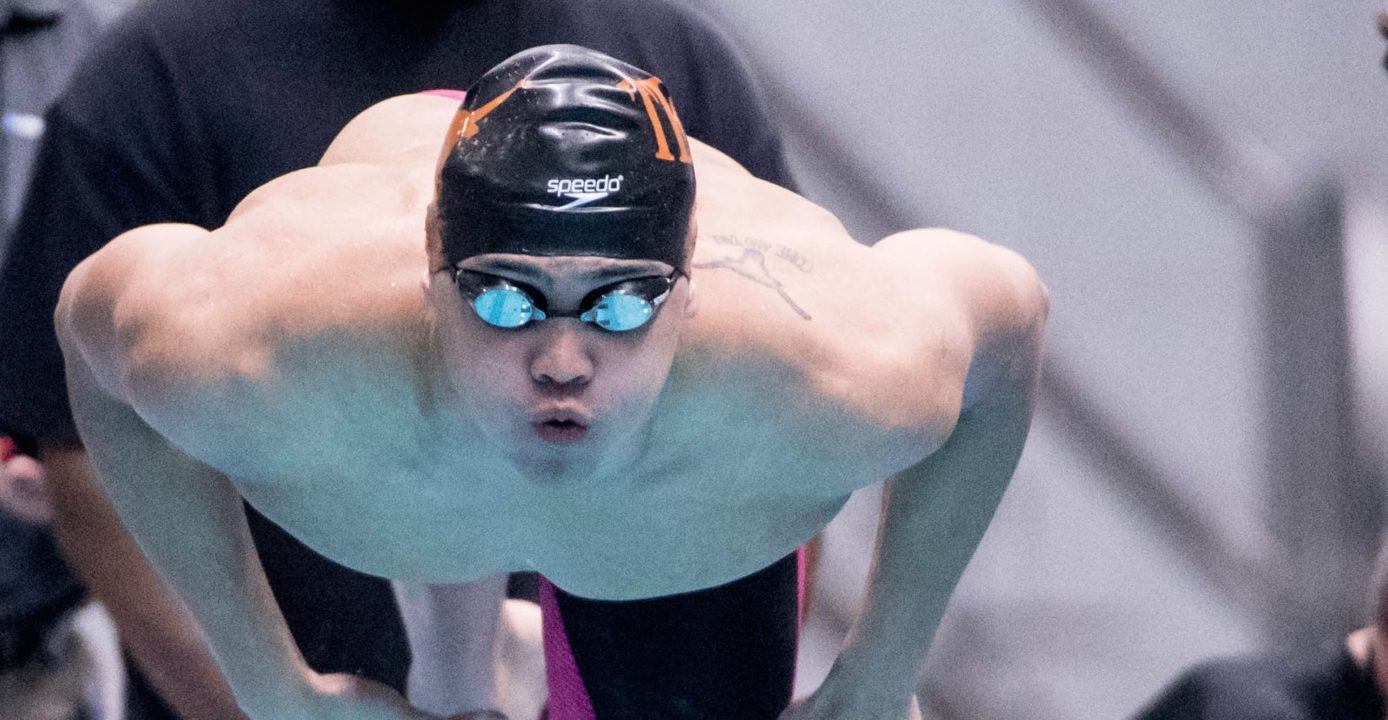 Yesterday we reported how 24-year-old Joseph Schooling would be solely focusing on the 200m IM for this 3rd and final stop of the 1st cluster of the 2019 FINA World Cup Series.

Competing in front of his home nation, Schooling said this week that, “I think the most important thing is (that) I need to get my volume up in practice, I need to start doing longer and more sustained, intense sets.

“The IM trains a lot of different things, like fitness and different strokes, and it taps on different muscle systems and energy systems.”

For tonight’s final, the former Texas Longhorn produced a solid outing of 2:00.23, a time just .24 outside of the aforementioned record and lifetime best for the Singaporean 100m fly Olympic Champion. He finished 4th overall in his 2019 World Cup debut.

Splits for Schooling’s 2:00.23 performance include the following:

Comparatively, the top finisher was Mitch Larkin of Australia, the World Championships finalist in the event who topped the podium tonight in 1:57.43. Behind him by well over a second was Lithuanian Danas Rapsys, who snagged silver in 1:59.14, while Aussie Thomas Fraser-Holmes just got under the 2-minute mark in 1:59.98.

He also stated, “This morning hurt more, morning swims are always hard for us (and) it’s hard to get up and go especially in heat one…I didn’t necessarily know where I was this morning, but overall, 2 solid swims and a lot of good things to take away from that.

“The 200m IM is always a painful race towards the end. I think middle distance is where I need to be swimming. (As for the) negatives, I wasn’t too happy with my turns, my transitions were kind of soft so that’s one more thing I’ve got to work on.”

He concluded, “I’m more in shape than I thought I was.”

All quotes courtesy of The Straits Times.

He probably went a 1:54 in practice

Why doesn’t MP IM Schooling and offer him a little coaching advice like he did with Luca?

Did I just make a pun?

He certainly looked like he needed more fitness at the Worlds so this move to extra all-round training makes sense to me even if he still focuses on the 100fly next year. I mean who wouldn’t want to defend an Olympic title?

Well, apparently if it hurts too much, Schooling.

I don’t think he is switching focus events for Tokyo, but using this type of training to make him a better swimmer. I dig it. I do off events to mix it up too. Good for him. Not a bad time, I appreciate him being honest that backing off of hard stuff for last few years was not helping him. Sounds like he is ready to push himself again.

Solid swim for a non-IMer. Still plenty of time for him to be in medal-worthy shape for Tokyo, so hopefully he keeps up the good work.