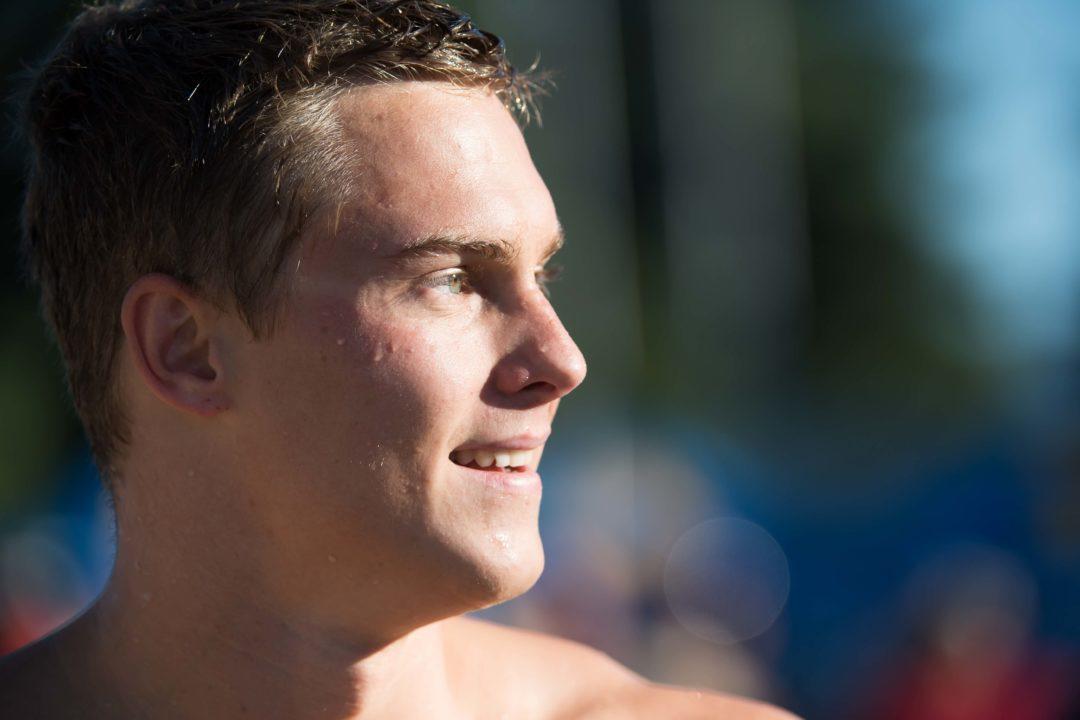 The 3rd stop of the 1st cluster of the 2019 FINA World Cup Series was red-hot with monster performances by the likes of Vlad Morozov and Andrew Wilson. Archive photo via Mike Lewis/Ola Vista Photography

Day 1 of the FINA World Cup in Singapore brought the house down in terms of monumental performances by several big international stars.

First, we saw a World Cup Record and the 11th fastest 50m freestyle time ever come courtesy of Russian racer Vlad Morozov. The 27-year-old notched a new lifetime best mark of 21.27 to collect a new Russian Record and etch his name onto the list of the quickest men on Earth in the event. You can read more about Morozov’s performance here.

Finishing behind Morozov tonight was America’s Michael Andrew, the first man to ever final in all 4 50m events at a World Championships. Andrew logged a time of 21.78 for silver tonight, an outing which falls within his list of top 10 personal performances.

Bronze in the men’s 50m free went to Italy’s newest federation member Santo Condorelli, the man who once represented America, then finaled in the 2016 Olympics for Canada before moving on to his new European home. Condorelli’s time tonight checks-in as his 3rd fastest performance this year.

Another head-turning performance came at the hands of American Andrew Wilson, the 25-year-old World Championships finalist who keeps raising the bar in the 100m breaststroke event. Tonight, the former Division 3 swimmer cranked out a new lifetime best time of 58.93 to slice .02 off of his previous personal best mark of 58.95 notched in the semi-finals of the event in Gwangju.

You can read more about Wilson’s performance, one which keeps him as the 3rd fastest American all-time, here.

Italy’s Nicolo Martingenghi produced a time of 59.58 for 100m breast silver tonight behind Wilson to represent the only other sub-minute swimmer of the final field. Lithuanian Andrius Sidlauskas was next with a time of 1:00.08 to wrangle up bronze.

Australia’s Holly Barratt cranked out her best 50m back performance in over a year, touching the wall in a mark of 27.95 to get the win tonight. The 31-year-old Rockingham swimmer produced the only sub-28 second time of the final, with Hong Kong’s Stephanie Au coming in for silver in a time of 28.16. Fellow Aussie Emily Seebohm rounded out the top 3 in 28.18 for bronze.

For Barratt, she owns a personal best in this event of 27.51 notched at the 2017 World Championships. Her most recent quickest came in the form of 27.96 notched at the Commonwealth Games last year, with Barratt finishing 4th.

Au of Hong Kong was on the brink of missing out on this meet due to travel difficulties at the Hong Kong airport that almost sidelined the entire team. We’ll keep an eye on whether it looks like the squad was able to make it here in its entirety.

Another Aussie got it done in the men’s 200m back, with World Championships multi-medalist Mitch Larkin stopping the clock at 1:56.60 for the win. Larkin was 1:56.39 in Jinan and 1:55.97, so tonight marks the 26-year-old’s 3rd consecutive World Cup victory in the event. He holds the Aussie National Record in a time of 1:53.17 from the World Cup stop in Dubai back in 2015, the same year the St. Peters Western star became 100m back/200m back double World Champion.

Her teammate Zsuzsanna Jakabos once again joined Hosszu on the podium with the silver, with Jakabos taking the runner-up spot in 2:07.48. That’s quicker than her 2019 best of 2:07.75 she produced in Jinan.

After clocking a new World Cup Record of 3:43.91 in the men’s 400m freestyle last week in Jinan, Lithuanian Danas Rapsys turned things down a notch tonight to produce a time of 3:45.59. That was still good enough for gold in essentially a one-man race, with the next-closest competitor, Henning Muhlleitner of Germany touching over 6 seconds later in 3:52.12.

Despite leading the men’s 100m fly heats this morning with an AM time of 52.01, American Giles Smith couldn’t replicate the feat and instead took bronze in the final race this evening in a time of 52.23. Ahead of the American was Aussie Grant Irvine, who split 24.16/27.10 to hit a solid swim of 51.26.

Irvine finished 3rd in the men’s 100m fly event behind David Morgan and Matthew Temple at the Aussie World Trials, with the former notching a time of 51.62 to the latter’s 51.47. However, Irvine’s time tonight in Singapore would have tied Kristof Milak for 4th place in the men’s 100m fly event at this year’s World Championships and marks his 2nd fastest ever, sitting only behind his 51.00 from the 2017 World Championships.

Silver behind Irvine tonight went to Hungarian Sebastian Sabo, formerly of Serbia, who touched in 51.28. That time shaves .06 off of his own lifetime best of 51.34 produced at Hungarian Nationals this past March.

Aussie Cate Campbell got it done once again in the women’s 50m freestyle, firing off a winning effort of 24.02. That time is just .02 off her own season-best of 24.00 and beats the 24.11 she put up in Gwangju for World Championships bronze. In fact, C1’s outing would have grabbed the gold in Gwangju ahead of American Simone Manuel’s 24.04 winning effort.

C1’s time tonight falls just outside the top 25 performances ever in the event. Sweden’s Michelle Coleman notched 24.65 for silver while Barratt also got back on the podium in 24.80 for bronze not long after her 50m free victory.

Russia’s Vitalina Simonova logged a time of 2:25.65 to take the women’s 200m breast ahead of America’s Breeja Larson who collected silver in 2:28.75.

In the women’s 400m free, Maddy Gough of Australia put up a time of 4:08.09 to take the World Cup Singapore title, with American’s Erica Sullivan just over a second behind in 4:09.28. For Sullivan, tonight’s performance represents the 19-year-old’s 2nd best outing ever, sitting only behind her 4:08.70 she logged in Jinan.

I am impressed with Andrew Wilson. He chose the school for his major and education ( a very hard school to get in) swam D-3 and now the best performer this year.

Holy [email protected]&# that’s a monster time from Morozov! Well done. He really did miss his taper at world’s. Hopefully we get to see him in top form in Tokyo.