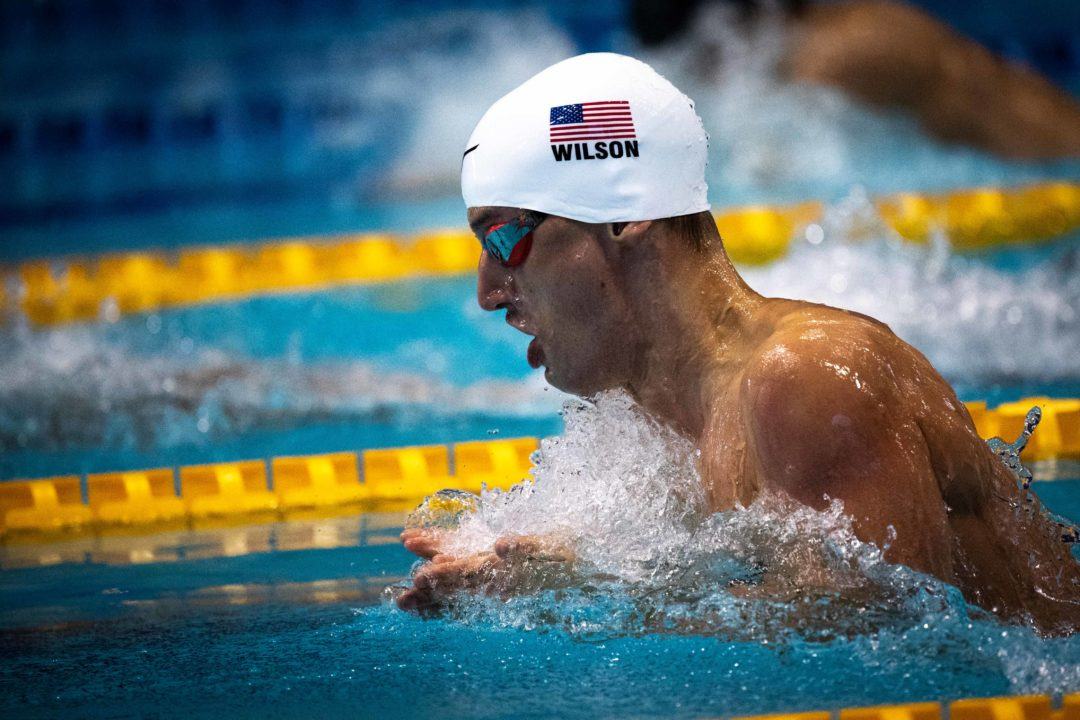 Andrew Wilson keeps raising the bar by lowering his personal best in the men's 100m breaststroke, this time to a new low of 58.93. Archive photo via Mike Lewis/Ola Vista Photography

The 3rd stop of the 1st cluster of the 2019 FINA World Cup Series brought a historic performance in the men’s 100m breaststroke by the hands of American Andrew Wilson.

The 25-year-old World Championships relay medalist fired off a winning time of 58.93, a mark which shaved .02 off of his own previous lifetime best of 58.95 produced just weeks ago in Gwangju.

Wilson logged that sub-59 second outing in the semi-finals of the men’s 100m breaststroke at the World Championships but ultimately hit the wall in 59.11 in the final to finish off the podium in 6th place. His semi time, however, made Wilson just the 4th American ever to go under 59 in the sprint event.

Here at the OCBC Aquatic Centre in Singapore, Wilson casually touched in a time of 1:00.21 to lead the 100m breast prelims before crushing his gold medal-worthy swim of 58.93 tonight. Splitting 27.81/31.12, Wilson remains the 3rd fastest American performer ever in the 100m breaststroke and also remains the 15th fastest performer ever in the world.

Italy’s Nicolo Martingenghi was the only other sub-minute swimmer of the Singapore final, with the Italian maestro hitting the wall in 59.58.

“His semi time, however, made Wilson just the 4th American ever to go under a minute in the sprint event.“

“just the 4th American ever to go under a minute” you mean under 59?

Very impressed! He chose Emory University, which is very hard to get in, majored in what he wanted (engineering or physics?) swam the D-3 program, and now is the top swimmer this year. 👏. Well done!

He also didn’t go 58.9 in SCY before going to emory. Their website listed his best yards time coming into Emory from high school as 59.4

Wilson is living proof that you dont have to dolphin your way to a 58! Way to go Andrew!

Swimmers should take note. There’s no reason that a taper needs to be one and done. Racing is the best training, IMO. This should also be further justification for making the team selection in the same season, not a year out. Too much changes in a year.

Great swim, Andrew! Wishing you luck in your trials journey and beyond. Nice breaststroke news for us fans to get!!!